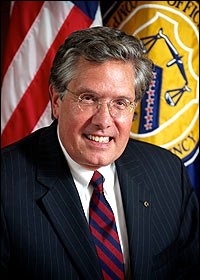 One of the common complaints heard about the U.S. financial regulatory system is that it’s so fragmented that one hand doesn’t know what the other is doing. For example, both the Office of the Comptroller of the Currency (OCC) and the Federal Reserve Board of Governors (Fed) regulate the largest banks – including the biggest banks on Wall Street. But neither of these regulators has any clarity on the securities trading risks that these banks holding trillions in insured deposits are taking. Neither does the FDIC that insures the deposits with backstopping from the taxpayer. That’s the Securities and Exchange Commission’s job. The same banks are also taking big risks in commodities and futures trading – but that’s left to the oversight of the Commodity Futures Trading Commission (CFTC). And on and on it goes.

A speech given yesterday by Thomas J. Curry, Comptroller of the Currency, underscores the dangers of this fragmented system, which effectively allows Wall Street to run wild by hiding systemic risks in the abundant cracks of this system: A system Wall Street itself designed through lobby pressure on Congress and regulators and a gold-plated revolving door.

Curry told his audience at an Exchequer Club luncheon in Washington, D.C. that “we are clearly reaching the point in the cycle where credit risk is moving to the forefront.” Curry’s laundry list of potentially problematic areas included leveraged loans, home equity lines of credit, subprime auto loans, and commercial real estate.

What Curry didn’t mention are the real elephants in the room – the casino room on Wall Street: the $180.29 trillion of derivatives held at the insured banking units of just four banks: JPMorgan Chase, Bank of America, Citibank (part of Citigroup) and Goldman Sachs. Just those four banks hold 91.1 percent of all derivatives held at the thousands of banks in the U.S. If that’s not concentrated risk, we don’t know what is. Curry also didn’t mention the frightening reality that some of the biggest banks are up to their old dirty tricks of dodging capital requirements through trades with dubious counterparties.

In June, the U.S. Treasury’s Office of Financial Research (OFR) released a report that set off alarm bells. The report, written by Jill Cetina, John McDonough, and Sriram Rajan, revealed that the big Wall Street banks are ginning up their capital measures by engaging in non transparent “capital relief trades.”

The report indicated that JPMorgan’s London Whale trades, exposed in 2012 and the subject of multiple Congressional hearings and an in-depth report by the Senate’s Permanent Subcommittee on Investigations, was, in fact, a capital relief trade. JPMorgan Chase has owned up to losing at least $6.2 billion of bank depositors’ money on those trades.

According to the OFR report:

“JPMorgan Chase & Co.’s losses in the 2012 London Whale case were the result of CDS [Credit Default Swap] usage which was undertaken to obtain regulatory capital relief on positions in the trading book.”

When Jamie Dimon testified on the London Whale trades before the Senate Banking Committee on June 13, 2012, he mentioned nothing about capital relief as a motivation. He said the trades were to “hedge the company against a systemic event, like the financial crisis or Eurozone situation. Among the largest risks we have as a bank are the potential credit losses we could incur from the loans we make.”

The OFR’s focus on these non transparent capital relief trades stems from regulators demanding that the biggest banks on Wall Street hold more capital to protect them from potential losses that could mushroom into another epic taxpayer bailout. Regulators allow banks to calculate their regulatory capital under a risk-based formula that requires more capital for riskier assets and loans and less capital for safer ones.

Despite Comptroller Curry’s speech yesterday reassuring that his staff is on top of risks in the banking system, the OFR writes that almost nothing is known about these capital relief trades:

“Relatively little data are available about U.S. banks’ regulatory capital relief transactions, the financial strength of nonbank counterparties selling the credit protection, and the impact of those trades…Although banks are required to report their use of some forms of credit protection to obtain capital relief, even instances where they do report, banks do not have to disclose the effect of these transactions on their risk-weighted assets and capital ratios. Without that information, it is difficult for investors and counterparties to know the effect of these transactions on a bank’s risk.”

Citigroup, the global behemoth that blew itself up during the 2008 crisis with off balance sheet vehicles, has not been tamed by regulators – even after receiving the largest taxpayer bailout in U.S. history. In February 2013, Bloomberg Business reported that Blackstone Group, a private-equity firm, had insured Citigroup against initial losses on $1.2 billion of shipping loans, allowing Citigroup to lower the amount of capital the bank had to set aside by 96 percent. The problematic loans remained on Citigroup’s balance sheet.

The report from the OFR also dropped a bombshell unknown to most Wall Street experts: AIG, the global insurance company that blew up in 2008 along with a large swath of Wall Street, had been conducting capital relief trades with European banks, according to a memo released with the OFR report.

That memo was sent on September 16, 2008 – a day after Lehman Brothers had filed for bankruptcy. The memo was attached to an email to Tim Geithner, then New York Fed President. It said AIG had engaged in swaps that allowed European banks to hold “1.6% in regulatory capital as opposed to 8%.”

AIG collapsed and was resuscitated with a $182 billion taxpayer bailout. Citigroup’s bailout included $45 billion from TARP, over $300 billion in asset guarantees from the government and more than $2.5 trillion in secret, low-cost loans from the Federal Reserve.