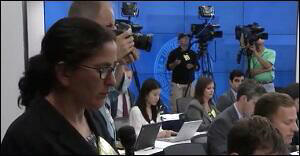 Last Friday, one day after the Fed’s announcement that it would hold rates steady at the zero bound range, the Dow Jones Industrial Average dropped 290 points. It calmed itself a little yesterday but was off more than 200 points in the first five minutes of trading this morning.

One catalyst for the market gyrations is that Ann Saphir, a reporter for Reuters, boldly asked Fed Chair Janet Yellen at Thursday’s press conference what has been on many minds for more than a year: is the Fed ever going to raise interest rates or are zero rates here for the rest of our lifetimes. This was the exact exchange:

Ann Saphir: “Ann Saphir with Reuters. Just to piggyback on the global considerations, as you say, the U.S. economy has been growing, are you worried that given the global interconnecting this, the low inflation globally, all of the other concerns that you just spoke about that you may never escape from this zero lower bound situation.”

The Chair of the U.S. Central Bank admitting that she can’t completely rule out that the U.S. may never escape from its zero bound range of interest rates is very likely the most unnerving utterance to escape the tongue of a Central Banker since time immemorial.

It was two simple sentences from Yellen: “Can I completely rule it out? I can’t completely rule it out.” That was the honest academician speaking. And, given that Japan, one of the largest economies in the world, has been hovering between zero and one-half percent interest rates for the past 20 years, has plied its economy with Quantitative Easing and has now moved into desperation mode, buying up exchange traded funds and real estate investment trusts, Yellen’s answer was forthright. 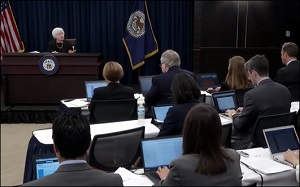 The market turmoil stems from the reporter’s inclusion of the word “never” – that the United States “may never escape from this zero lower bound situation.” While Janet Yellen may have thought she cushioned her remarks by calling it “an extreme downside risk,” Americans today fully grasp that Wall Street blowing itself up in 2008 was also an extreme downside risk but it happened, triggering a series of other highly unlikely extreme downside risks: the greatest economic collapse since the Great Depression, the biggest housing rout in seven decades, a global banking crisis that is still not fully under control, and the fastest expansion of the national debt in history. Since the repeal of the banking protections in the Glass-Steagall Act, 100-year financial floods are coming as frequently as afternoon showers in the tropics.

The saga of global deflation took on more urgent overtones in overnight trading as commodity prices slumped further. Industrial metals took hits ranging from one percent to almost three percent with copper down 2.8 percent in early morning trade. At 10:22 a.m., West Texas Intermediate crude oil is down more than 2.36 percent at $45.58. European coal prices slumped to a record low according to a report from Bloomberg Business.

All of this is consistent with a global economy battling deflation and not consistent with a roster of Federal Reserve presidents filling the airwaves with chatter about when the Fed’s rate hike is coming. The gap between “never” and next month is simply laughable.

Janet Yellen apparently understands this “never” business has rattled markets and Washington insiders. She’s scheduled to deliver a speech this Thursday in Amherst, Massachusetts where she is likely to walk back any suggestion that the U.S. is locked in the zero bound range for eternity.

Just how seriously Fed officials worry that the U.S. could morph into Japan’s two-decade experience with deflation resides in this excerpt from a 2013 speech by William Dudley, President of the New York Fed:

“Let me start by briefly reviewing the experience of Japan and the United States.  As you all know, Japan’s rapid economic ascent and investment boom came to an abrupt halt in the early 1990s with the bursting of a gigantic bubble in equities and real estate.

“Asset price deflation resulted in a huge decline in wealth.  This led to a sharp fall in demand, a balance sheet squeeze for both businesses and households, and a large increase in problem loans for Japanese financial intermediaries.  By some measures—such as the loss of wealth relative to the size of the economy—this was a bigger shock than the U.S. experienced in 2008.  Growth slowed sharply and inflation fell.

“The Bank of Japan (BoJ) responded by reducing overnight interest rates from a peak of more than 8 percent in early 1991 to ½ a percent by the fall of 1995.  Most studies of this period suggest that policy was generally appropriate given economic forecasts at the time, but too tight relative to the actual outcomes. Economic forecasts for Japan—both by the official community and by private sector agents—were consistently more optimistic than the actual outturns.   It is noteworthy that as late as January 1995—on the eve of deflation—10-year Japanese Government Bond (JGB) yields were still at 4.7 percent.

“With the benefit of hindsight, we now understand that the disinflationary consequences of the asset price bust and financial stress where vastly more powerful than was widely realized at the time.  As we later saw in the U.S., the forces of contraction and disinflation operated through many different channels—not just directly on household wealth, for example, but also through the impact of the asset price bust on the health of financial intermediaries and the supply of credit to households and businesses.

“Over time, the Japanese banking system came under mounting stress.  This was a slow-motion crisis, as the assets were mainly loans that were not marked-to-market.   Accounting practices and regulatory forbearance allowed banks to delay charging off bad loans and recapitalizing at the cost of impairing the availability of credit to new potential borrowers.   A full-blown banking crisis finally materialized in 1997.  Although some banks were recapitalized in 1999, the full regulatory response took several more years.

“The monetary and fiscal stimulus that was provided helped Japan avoid a deep recession.  But expectations about future nominal income growth for both households and businesses ground lower over time.  With inflation expectations sinking, inflation-adjusted real interest rates rose, and Japan became mired in deflation.

“While deflation is ultimately a monetary phenomenon, structural elements were also important.  Long-term demographic factors added to the deflationary pressures and structural rigidities, and credit supply problems constrained the reallocation of resources to growth sectors.  These structural factors made it substantially more difficult to escape the deflation trap.

“The Bank of Japan was active during this period.   From the late 1990s onwards, it pioneered an extremely broad array of innovative tools—many of which were later adopted, in amended form, by the Fed and other major central banks.  These included forward guidance on the future path of the policy rate, quantitative easing through purchases of government securities and private assets including asset-backed securities, equities and real estate investment trusts (REITs), a more quantitative inflation objective, and funding for bank lending.

“From my perspective, Japan’s experience with forward guidance for the policy rate, asset purchases  and a more formal inflation goal are particularly instructive, as this helped inform the later use of such tools in the United States.

“In early 1999, the Bank of Japan said it would maintain its zero interest rate policy until ‘deflationary concerns’ were ‘dispelled.’ This commitment was lifted in August 2000, and the BoJ raised the policy rate by a quarter-point.   However, the BoJ was subsequently obliged to reverse course, and reintroduced forward guidance in March 2001.  This guidance was tied to the realization of a new inflation objective.

“With deflation intensifying, the Bank of Japan embarked on a quantitative easing (QE) program in 2001 designed to increase the size of the monetary base.  The Bank of Japan engaged in purchases of JGBs that were large in scale, but confined to short-dated maturities.  This reflected a view that such purchases primarily acted through the liabilities side of the central bank’s balance sheet—pushing up the amount of reserves in the banking system.  Because the growth of the monetary base was deemed the goal of policy, it was logical to purchase short-dated assets, which could be allowed to run off once a sustainable recovery was in place.

“The downside of this approach was that the purchases did not change the composition of the private sector’s balance sheet very much because the policy essentially resulted in the exchange of one short-term risk-free asset for another.  As a consequence, the purchases had only modest direct effects on financial conditions.

“Starting in 2006, when the initial wave of QE ended, the BoJ began to formalize its inflation goal in numerical terms. This was initially expressed as an ‘understanding of medium-to long-term price stability’ based on individual policymakers’ views. The inflation objective went through several iterations before being defined in 2012 as a Committee ‘goal’ of a positive range of 2 percent or lower, with a lower interim goal of 1 percent.

“Following the onset of the global financial crisis in 2007-2008, Japan resumed QE, and gradually tightened the link between its policy actions and its objectives.  By January 2012, the BoJ had committed to keep rates at the zero bound and to continue purchasing assets until the 1 percent goal was ‘in sight.’

“Several prominent Japanese experts have argued that there was a ‘start-stop’ aspect to monetary policy during the 1990s and 2000s with reversals in policy beginning before deflationary expectations were eliminated.  Fiscal policy also reversed abruptly on several occasions before economic recovery was firmly established.  While Japan did enjoy a period of respectable real per capita growth in the mid-2000s, escape from deflation proved elusive.

“More than a decade after Japan’s bubble burst, the U.S. housing bubble burst.  This exposed extensive vulnerabilities in our financial system and triggered a global financial crisis. Unlike Japan, we had the advantage of being able to learn from another nation’s recent experience.  We applied what we understood to be the lessons from Japan, though with hindsight, perhaps not in every respect as completely as we could have.

“In particular, Japan’s experience reinforced the lessons of the Great Depression here in the U.S. and made us sensitive to the disinflationary force of an asset price bust and financial crisis. We recognized that we had to be very aggressive to prevent deflation and deflation expectations from becoming well entrenched.

“The Federal Reserve reduced short-term interest rates to nearly zero by late 2008—a little over a year and a half after the initial shock hit in August 2007. Immediately upon reaching the zero bound, we provided additional stimulus by expanding our balance sheet and deploying forward guidance on the policy rate. These actions, in the context of a strong commitment to both our inflation and employment mandates, succeeded in preventing deflation expectations from taking hold, even though real outcomes were disappointing.  We also took steps to formalize our 2 percent inflation objective.” [Read the full speech here.]

It is now seven years since the Wall Street crash. The Fed has been at the zero bound range since December 2008 and the U.S. is currently seriously undershooting an inflation target of 2 percent. Ann Saphir was courageous to ask the question that is on so many of our minds.