New Book: Financial Markets “Contribute Little, If Anything, to the Betterment of Lives and the Efficiency of Business” 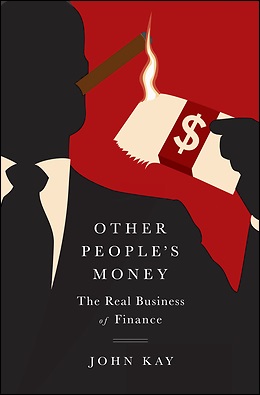 If you want to engage in a serious effort to reform Wall Street, buy two copies of economist and financial writer John Kay’s book coming out in the U.S. on Tuesday. Keep one copy of the book for yourself (share it with family and friends) and send the other copy to a member of the Senate Banking committee. That committee is highly likely to be looking at reforming Wall Street again in the near future, given the convulsions in equity, credit and commodity markets of late and an endless stream of ongoing charges of corruption against the mega banks.

In his book, Other People’s Money: The Real Business of Finance, Kay demonstrates not only a sagacious understanding of the grotesque underpinnings of financial markets but he maps out a series of common sense, structural reforms to bring the financial industry back to its key mandates: efficient allocation of capital and honest handling of other people’s money.

From beginning to end, Kay peels back the crass hypocrisy of the market overseers, writing that much of what the financial sector does “contributes little, if anything, to the betterment of lives and the efficiency of business. And yet many things that finance could do to advance these social and economic goals are not done well – or in some cases at all.”

What the financial sector has ably done, says Kay, is brainwash politicians and a chunk of society to the idea that it is “special.” “But,” says Kay, “finance is not special, and our willingness to accept uncritically the proposition that finance has a unique status has done much damage…The industry mostly trades with itself, talks to itself and judges itself by reference to performance criteria that it has itself generated.”

Political leaders, funded in their campaigns by the financial sector, have been major purveyors of the propaganda that Wall Street is a unique industry that must be protected at all costs. Kay writes:

“…political leaders have set their public faces against future bank rescues while their operatives have reassured markets that they do not mean what they say. President Obama could assert that the passage of Dodd-Frank means ‘no tax-funded bailouts – period,’ while his Treasury secretary not only upheld the ‘Geithner doctrine’ – no significant financial institution would be allowed to fail – but also provided an extended defence of that position in his memoirs.”

Kay lives in London, is a visiting professor at the London School of Economics and a columnist for the Financial Times. Thus, his book uses British spellings for words like “defence,” “stabilise,” “financialisation.”

Kay notes correctly that the “origins of the global financial crisis lay in the structure of the industry,” but that structure to a very large degree remains very much intact, particularly when it comes to derivatives, which he notes are now “three times the value of all the physical assets in the world.”

Kay has this further worthwhile insight into derivatives:

“What is it all for? What is the purpose of this activity? And why is it so profitable? Common sense suggests that if a closed circle of people continuously exchange bits of paper with each other, the total value of these bits of paper will not change much, if at all. If some members of that closed circle make extraordinary profits, these profits can only be made at the expense of other members of the same circle.”

To mull the above over a little bit, recall how Goldman Sachs purchased credit protection derivatives on subprime mortgage loans from AIG Financial Products to shield itself and other banks from losses. This brought down AIG. The taxpayer was then railroaded into bailing out AIG to the tune of $185 billion while Goldman Sachs was paid 100 cents on the dollar.

To put it even more succinctly, as in the words of Occupy Wall Street: “They got bailed out, we got sold out.”

Did the U.S. Congress rein in this hubris in the copious reform legislation known as Dodd-Frank? No they did not. Kay notes that the derivatives exposure of JPMorgan Chase is today around $70 trillion and at Deutsche Bank it’s around €55 trillion. “These figures,” writes Kay, are “about one-and-a-half times the total value of all the assets in the USA, and twenty times German national income.”

The genius of the book’s thesis resides in the following four paragraphs:

“The finance sector of modern Western economies is too large. It absorbs a disproportionate share of the ablest graduates of our colleges and universities. Its growth has not been matched by corresponding improvements in the provision of services to the non-financial economy – payments systems, capital allocation, risk mitigation and long-term financial security for individuals and households. The process of financialisation has created a structure characterised by tight coupling and interactive complexity, and the resulting instability has had damaging effects on the non-financial economy.

“Volumes of trading in financial markets have reached absurd levels – levels that have impeded rather than enhanced the quality of financial intermediation, and increased rather than diversified the risks to which the global economy is exposed. The capital resources needed to reconcile these trading volumes with economic stability have not been available; nor will they be. The scale of activities undertaken by traders within a modern investment bank is not viable without the implicit and explicit support provided by retail deposits and the taxpayer.

“The existing structure of the finance sector requires much more capital, not the small additional amounts required by Basel III. But equity investors will not provide financial conglomerates with fresh capital on the scale necessary. Investors no longer trust the financial statements of banks or the people who run the banks…

“If activities cannot raise sufficient equity to ensure they are adequately capitalised, or earn satisfactory rates of returns on that equity if they are adequately capitalised, the lesson of market economics is clear: such activities should not take place; or at least the scale on which they do take place should be substantially reduced. And that is how we should view the existing banking system.”

The financial industry has now moved into such an out-of-control star wars type of mentality that, says Kay, “some of the finest mathematical and scientific minds on the planet are employed to devise algorithms for computerised trading in securities that exploit the weaknesses of other algorithms for computerised trading in securities.”

Kay lays out a series of reforms designed to re-center the industry on its core missions of allocating capital prudently and providing a meaningful benefit to savers and investors. The recommended reforms include reducing complexity, lowering costs, enhancing stability, decreasing the influence of money on politics by capping spending on elections, cutting off the revolving door between public service and the financial sector and establishing sound sources of advice for lawmakers outside of the Wall Street echo chamber.

This is a book well worth your time and the cost of postage to the Senate Banking committee.