Market Rout: The Trend Ain’t Your Friend – No Matter What JPMorgan Says 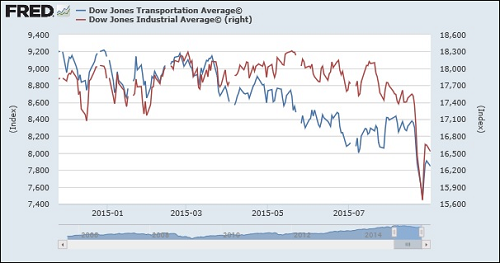 JPMorgan Asset Management is running “sponsored content” at Barron’s, the financial publication, with today’s date and a remarkably rosy economic outlook given last week’s market rout and this morning’s Dow futures plunging to down 396 points at 9:02 a.m. – just 28 minutes before the market was set to open in New York.

There used to be a time when advertising in newspapers was called advertising and you knew money was changing hands. All Barron’s is saying about JPMorgan’s “sponsored content” is this: “Barron’s news organization was not involved in the creation of this content.”

Here’s the curious part of what JPMorgan Asset Management has to say about the U.S. economy:

“…we find little to indicate that a slowdown is imminent. In any event, historically there’s been a long lag between signals of a downturn and the onset of recession. In the past, it has taken about a year for an inverted yield curve, the classic symptom of diminished expectations, to translate into a business downturn. It has taken more than four years on average for a recession to follow on the Federal Reserve’s first rate hike of a cycle—and after nearly a decade we are still awaiting that first hike.

“No scenario is immune to shocks, of course, and the current environment contains several threats—the Greek tragedy, the prospect of a hard landing in China and the ultimate certainty of rising rates in the U.S. — that might give investors pause. Of the three, we take the prospect of a Chinese hard landing most seriously because of that economy’s global importance.”

Let’s start first with the notion that there is “very little” to suggest a “slowdown is imminent.” Off the top of our head, we can think of an alarming number of suggestions. Let’s start with the Dow Transports.

Markets trade not on what they see looking out the window today but on what they contemplate will be the situation six months down the road. This is why markets are known as predicting or discounting mechanisms: they are a pricing mechanism based on future prospects. Parts of the market see things differently than the broader market and over time they have shown themselves to be early predictors of a trend. One of those sectors is the Dow Transports, otherwise known as the Dow Jones Transportation Average.

The Dow Transports was the first-ever stock index, initiated in 1884 by Charles Dow and originally known as the Dow Jones Railroad Average. (It assumed its current name in 1970.)

Today, the Dow Transports include 20 companies involved in the transportation of goods. A sampling of companies with the largest weightings in the index include FedEx, United Parcel Service, Kansas City Southern, Union Pacific and Norfolk Southern. In simple terms, when the U.S. economy is healthy and growing, the Dow Transports index would be rising in value as its companies should be showing solid earnings as consumer demand picks up and they are shipping lots of goods. But as the chart above shows, the Dow Transports began to turn down in late November 2014 while the Dow Jones Industrial Average went in the opposite direction. Notice how they’ve both converged on the same plunging path now.

The U.S. stock market is now discounting an earnings recession over the next several quarters.

Also, JPMorgan should not be drawing comfort from the Fed; they should be stocking up on ulcer relief medicine over the Fed’s bullet-less monetary gun. JPMorgan’s “sponsored content” in Barron’s noted that “It has taken more than four years on average for a recession to follow on the Federal Reserve’s first rate hike of a cycle — and after nearly a decade we are still awaiting that first hike.”

Clearly, one can’t apply historic norms to a period that includes the greatest economic collapse since the Great Depression, as well as the greatest income and wealth inequality since the Great Depression. The Fed hasn’t been able to hike rates and reload its monetary gun because the bloated and systemically contagious balance sheets of the tyrannical Wall Street mega banks (which includes JPMorgan) are holding their own, fully-loaded gun to the Fed’s head.

But more importantly, the banking tyrants have created the situation where the Fed will find itself entering the next downturn with $4.5 trillion on its own bloated balance sheet because it had to vacuum up Wall Street’s excesses during the collapse. Exactly how much more Quantitative Easing can be expected from the Fed with that size of a balance sheet?

When JPMorgan cautions that there might possibly be the threat of “a hard landing in China,” what it should also be thinking is that a hard landing in China would lead to a full blown currency war in Asia as all the exporting countries scramble to devalue their currencies to compete more aggressively on exports to maintain market share. That, in turn, could lead to the U.S. importing deflation while a stronger U.S. dollar would further curb exports from the U.S., leading to further slumps in the domestic manufacturing sector.

Adding to the increasing likelihood of that scenario, the Institute for Supply Management reported this morning that manufacturing in the U.S. in August fell to a reading of 51.1 from 52.7 in July. That decline is completely consistent with the selloff in the Dow Transports and the contraction in earnings in the S&P 500. What it is not consistent with is the bizarre revision to the second quarter GDP report, showing growth of 3.7 percent.