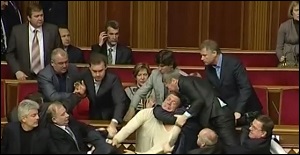 Donald Trump has led the Republican Party into a dangerous trap. Republicans are now competing for tv ratings rather than a serious run for the White House. It’s the “Republican Hopefuls Reality TV Show,” promoted heavily in advance by CNN as a modernized form of gladiator battle.

According to the Oxford Dictionary, Reality TV is a television program “in which real people are continuously filmed, designed to be entertaining rather than informative.” Wikipedia goes further, writing that “the focus tends to be on drama and personal conflict, rather than simply educating viewers.”

Completely in step with the above definition, last night’s three-hour Republican debate, aired on CNN from the Ronald Reagan Presidential Library in Simi Hills, California, featured 11 Republican presidential contestants hurling slurs, innuendo, below the belt personal insults and frequently childish digs at each other.

The entertainment industry magazine, Variety, acknowledged the debate as pure entertainment when it noted that not only was it covering the event but a reporter from “Entertainment Tonight” was also on hand.

Jindal called Trump a “narcissist” while Pataki said Trump was “unfit” to be President. At the later debate, Trump shot back at Pataki saying he wouldn’t be able to “be elected dog catcher right now.”

Walker ridiculed Trump’s lack of political experience while getting in a dig at Trump’s prior reality tv show, saying “we don’t need an apprentice in the White House.”

Exchanges between Trump and Carly Fiorina were surreal. Moderator Jake Tapper asked Fiorina about Trump’s quote in a Rolling Stone magazine interview where he said the following about her appearance: “Look at that face. Would anyone vote for that? Can you imagine that, the face of our next president?”

Tapper noted that Trump had later said he was referring to her “persona” and not her actual face. Fiorina responded: “I think women all over this country heard very clearly what Mr. Trump said.”

Showing that he’s incapable of grasping that there is more to women than their appearance, Trump responded that he thought Fiorina was “beautiful.”

Trump’s inability to escape from his obsession of attacking both women and men on the basis of their appearance while leading the field of Republican candidates in the polls is an embarrassment to America but is likely boosting TV ratings for these reality tv style debates. Trump is likely to milk that as long as he can.

In the first Republican debate on Fox, moderator Megyn Kelly framed a question to Trump by noting, “You’ve called women you don’t like ‘fat pigs,’ ‘dogs,’ ‘slobs,’ and ‘disgusting animals.’ ” Trump interjected that he had been talking about “only Rosie O’Donnell,” as if that settled the matter. Kelly continued: “Your Twitter account has several disparaging comments about women’s looks. You once told a contestant on The Celebrity Apprentice it would be a ‘pretty picture’ to see her on her knees.”

In a recent published interview with Trump by New York Times columnist Maureen Dowd, Trump called Rand Paul a “moron” while again making an inexplicable dig at his appearance, calling him “a tiny little guy.” 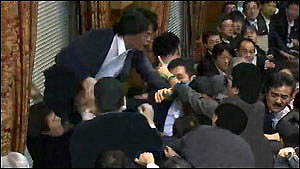 The challenge for Trump is to take this 11-character cast to the next level in the ratings battle. Fistfights may be necessary, especially if Trump wants to compete with what’s happening in Parliaments around the world. There’s now even a web site filled with videos of politicians pummeling each other while Parliament is in session.

In a timely underscore of new-age gladiator politics, making headlines around the globe today is a fist-fight that broke out in Japan’s Parliament on Thursday over a bill to allow Japan’s military to fight abroad.