Did Small Investors Get Fleeced in the 1089-Point Plunge on August 24? 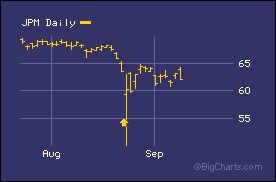 On Monday, August 24 the Dow Jones Industrial Average plunged 1089 points within the first few minutes of trading. Close to half of that loss was recouped by the closing bell when the Dow clocked in with a loss of just 588 points. So if the small investor didn’t panic, he made out okay, right? Not necessarily.

Small investors frequently have in place standing stop-loss orders that are sitting on the stock exchange order books to sell a stock at a pre-determined exit price that is lower than the current market to “stop” further losses. Once the target price of the stop-loss order is reached, the order automatically becomes a market order and is executed at where the market happens to be. In properly functioning, orderly markets, this would typically mean the stop-loss order would be executed at, or close to, the designated target price. In flash-crash markets, on the other hand, it’s a recipe to be robbed in broad daylight.

Let’s take, for example, the trading in the stock of JPMorgan Chase on the morning of Monday, August 24. The stock had closed at $63.60 on the prior Friday, August 21. Its opening trade on Monday morning was at $59.29. Within a matter of minutes, however, the stock plunged to $50.07 – a stunning 21 percent from its Friday close. But by the day’s close, JPMorgan Chase was at $60.25, a mere 5 percent lower than Friday’s close.

Similar stop-loss carnage occurred on August 24 in other large cap stocks and household names like Home Depot, General Electric, Apple, Ford Motor, Colgate-Palmolive, Merck and Verizon. This suggests to many that market makers simply backed away from making a market until hedge funds stepped in to buy at prices 15 to 20 percent lower than the prior trading session and make a tidy profit on the day.

What was the final tally for stop-loss orders going off at obscenely low prices only to see the stocks recover most of the losses by the close of the day? We have yet to find reliable data on that score but we plan to keep asking.

It’s not too hard to imagine just how badly the small investor made out on August 24 from his stop-loss orders. We have a darn good precedent – the Flash Crash of May 6, 2010 when the Dow plunged 998 points and then closed the day with a loss of just 348 points.

Mary Schapiro was at that time the Chair of the Securities and Exchange Commission (SEC). Interestingly, the official report on the Flash Crash that was released on October 1, 2010 provided no analysis of the wealth destruction done to the small investor whose stop-loss orders were executed at prices wildly away from the designated price that day. However, for those who were carefully following Schapiro’s speeches following the Flash Crash, we learned the devastating truth.

In a speech on September 7, 2010 at the Economic Club of New York, Schapiro told the audience the following:

The 2010 Flash Crash has been widely cited as a major factor in destroying the retail investors’ confidence in the stock market. Author Michael Lewis’s 2014 book Flash Boys, his appearance on Sixty Minutes and subsequent revelations of high frequency traders rigging markets also did serious damage to retail investors’ view of the stock market as a stable place for their money.

Getting taken to the cleaners on August 24 represents just another brick in the wall of distrust.