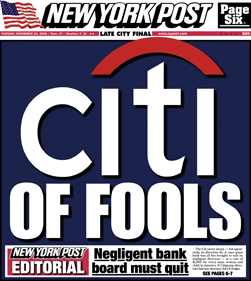 While the U.S. taxpayer was involuntarily shoveling over $2 trillion in bailout funds and loans into Citigroup from 2008 to 2010, the bank was committing at least one admitted felony on its foreign currency trading desk. And if ongoing testimony in a London court is to be believed, the U.S. Justice Department could have brought charges against individuals instead of settling its case for one single felony charge against the banking unit only.

Citigroup’s banking unit, Citicorp, along with three other global banks (JPMorgan Chase, Barclays and RBS) admitted to a felony charge of rigging the foreign currency market brought by the U.S. Justice Department on May 20. Approximately $5 trillion in foreign currency trades are made globally each day, with billions of dollars to be made through advance knowledge of where prices will be fixed.

Last Wednesday, the same day that the U.S. Justice Department unveiled a new plan to go after individuals in banking fraud cases instead of just settling with banks for large sums of money and a promise to behave, Perry Stimpson was telling a London court how foreign currency rigging was endemic at Citigroup and the culture of cheating was passed down by his bosses, one of whom pressured him to participate in a chat room and share information with other banks. Stimpson was also doing something in the courtroom that the U.S. Justice Department has failed to do – he was naming names inside the bank.

Stimpson is a former foreign currency trader at Citigroup who was fired during the global investigations into a cartel of banks rigging foreign currency trading to boost their profits. He is suing Citigroup in an employment claim for unfair dismissal. At least three other Citigroup currency traders are expected to bring similar claims in court. Citigroup has paid a total of $2.29 billion to resolve the allegations with U.S. and U.K. regulators.

According to the felony charge brought by the U.S. Justice Department – which Citigroup admitted to — Citigroup’s illegal behavior in the foreign currency rigging matter spanned a period from December 2007 through January 2013 – that would include the period after 2008 when Citigroup was alive only because of the largest bank bailout by the taxpayer in U.S. history. Cumulatively, Citigroup received $45 billion in TARP funds, over $300 billion in asset guarantees, and more than $2.5 trillion in below-market rate loans from the Federal Reserve. According to the Government Accountability Office (GAO-11-696), in just one bailout program alone, the Primary Dealer Credit Facility (PDCF), Citigroup cumulatively borrowed over $1.75 trillion from March 16, 2008 to February 1, 2010. The U.S. Treasury sold its last bailout era holdings in Citigroup in December 2010. To put it simply, Citigroup was using public funds while it committed its foreign currency felony – to which it admitted guilt in May of this year.

According to Reuters, Stimpson told the court the following:

“ ‘Our Investor Desk would comply with a weekly request from (a client) for details of Central Bank activity that Citi had transacted,’ Stimpson said in his witness statement to an employment tribunal in London. Stimpson did not specify which central banks he was referring to.

“He said Jeff Feig, who was Citi’s global head of trading at the time, called a halt to sending round the ‘central bank survey,’ as Stimpson said it was referred to, in mid-2013 because he decided it was wrong. He did not elaborate. Feig was not immediately available for comment.

“ ‘Another common practice on the Investor Desk was to cut and paste details of Citibank’s order book on to Bloomberg chats at the request of customers,’ ” Stimpson said in his statement.”

“Stimpson recounted one alleged example of front-running, where a merger deal for one of Citigroup’s clients resulted in a large spot transaction. Stimpson said that his senior at the time, Jeff Feig, decided the deal was ‘too large’ for the currencies desk.

“Feig ‘bought large amounts of cash and options ahead of the transaction, sizable enough to move the spot rate higher and netted $35 million [for the bank] out of the deal,’ he said.”

Citigroup has denied all of the charges made by Stimpson.

In 2004, Enrico Bondi, the administrator of Parmalat, a large Italian milk company that filed for bankruptcy, sued Citigroup in a New Jersey court.  Bondi alleged in court documents that Citigroup committed fraud in its dealings with Parmalat, participated in civil and RICO conspiracies, and had failed to disclose Parmalat’s deepening insolvency to the detriment of other creditors and investors. Citigroup had named one of its Parmalat structures Buconero, Italian for “black hole.”

Another structure Citigroup set up for Parmalat sold commercial paper, backed by what turned out to be fake invoices, to U.S. money market funds. Citigroup contended it was “the victim” in all matters. With the artful help of mega law firm, Paul, Weiss, Rifkind, Wharton & Garrison, Citigroup not only defeated Bondi’s claims but won a countersuit in a jury trial that awarded Citigroup $364 million.

Then there was Citigroup’s “Dr. Evil” trade in 2004 where traders on its European bond desk in London placed billions of dollars of sell orders in a period of 18 seconds, driving down the prices of European sovereign debt. The desk then bought back the bonds at a huge profit the next morning, handing major losses to competitors. U.K. regulators failed to charge any individual, imposing a minor fine of $26.4 million on the firm.

Should the London court believe Perry Stimpson or Citigroup’s lawyers? Citigroup’s rap sheet below might shed some light on the culture of this mega bank.

A sampling of what Citigroup has been charged with and settled since December 2008.

May 20, 2015: Citicorp, a unit of Citigroup becomes an admitted felon by pleading guilty to a felony charge in the matter of rigging foreign currency trading, paying a fine of $925 million to the Justice Department and $342 million to the Federal Reserve for a total of $1.267 billion. The prior November it paid U.S. and U.K. regulators an additional $1.02 billion.