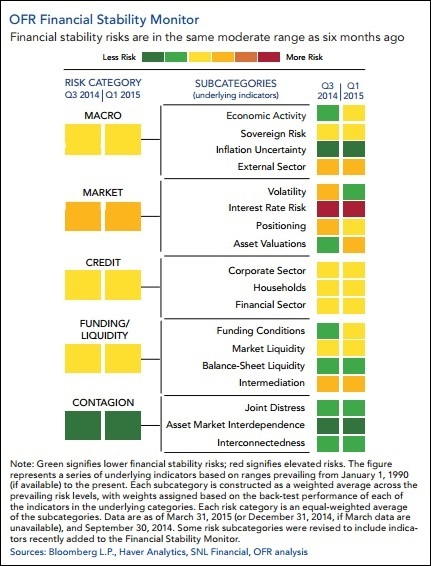 Remember when the Department of Homeland Security was issuing those color-coded terrorist alerts? Well, they don’t do that anymore.  They’re back to using plain ole black-and-white words to describe threats.

Apparently, however, the U.S. Treasury’s Office of Financial Research (OFR) thought it was such a cool idea that they’ve started color-coding threats to our financial security from the denizens on Wall Street: the gang that brought our country to its knees in 2008 while the most expensive military in the world was hunting down robed cave-dwellers in the Middle East.

OFR’s color-threat alert is called the Financial Stability Monitor. The monitor is based on approximately 60 indicators and organized as a heat map: The closer an indicator is to the red end, the more elevated the risks; the closer an indicator is to the green end of the spectrum, the lower the risks. The Monitor, released yesterday, says that “financial stability risks remain moderate.” Unfortunately, when we studied the accompanying chart, we found that it’s based on first quarter data, meaning it’s almost three months old. (Imagine Homeland Security issuing a terrorist alert, then telling you it might not be all that reliable because it’s based on stale intelligence.)

Nonetheless, there’s some very interesting takeaways from the Monitor. First, even though the OFR has characterized the financial stability threat as “moderate,” a close reading of the report suggests a heightened threat. These are some key points from the report:

Reduced liquidity, migration of risks from banks to less-regulated sectors, and rising interest rates sound to us like the perfect financial storm potentially in the making.

Indeed, the one area flashing red on the chart is interest rate risk. Gary Cohn, President and COO of Goldman Sachs, took to the radio last week to share his two cents on what’s likely to happen when the Federal Reserve finally hikes interest rates (after talking about it since what feels like the Paleozoic era).

Jake Siewert, global head of Corporate Communications at Goldman Sachs asks Cohn, in regard to a Fed rate hike: “Do you think markets have fully priced in the risks?” Cohn responds:

“We’re probably less ready than people think. It always is uniquely interesting how it comes as a surprise to everyone when something happens that we’ve been talking about for a long period of time…The reality of something happening is always different than the dialogue of it’s obviously going to happen. And when it does happen, it’s usually not the first derivative event that people are caught off guard by. They’re caught off guard by the second, third and fourth derivative events.”

We believe Cohn is referring to exogenous events as opposed to actual derivatives like credit default swaps. But, of course, derivatives do have a nasty habit of blowing up at inopportune times.

One area of significant financial risk to the U.S. financial system which the OFR can’t color-code because it’s hiding in a black hole is the capital relief trades that major U.S. banks and their foreign counterparts are conducting with unknown counterparties that could, potentially, teeter under market stresses caused by a Fed interest rate hike or simply rising rates.

As we reported last week, these so-called capital relief trades are being conducted by the banks, with hedge funds and private equity funds as counterparties, to dress up the appearance of stronger capital while keeping the deteriorating assets on their books. On June 11, OFR released a report on these trades, noting: “Banks have significant incentives to reduce their required regulatory capital by transferring credit risk to third parties. But public data needed to analyze such activities are scant.”

If we can’t quantify the amount of these trades; if we have no transparency on the credit-worthiness of the counterparties, is OFR really on solid ground with its color-coded warnings?

When it comes to Wall Street, without the restraint imposed by the repealed Glass-Steagall Act, it’s always a red alert day for investors.