Greece: Why Is a Nation of 11 Million Causing Stock Market Losses Around the World Today? 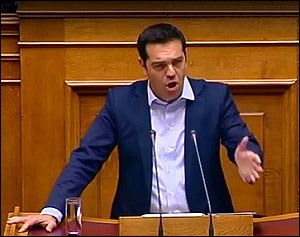 Greece has just a tad more population, at 11 million, than New York City and its boroughs. But this morning, it has caused hundreds of billions of dollars to be erased from stock and bond markets around the world.

The situation in Greece this morning is as follows: banks and the Athens Stock Exchange have been closed until at least July 6, following a breakdown in talks between Greek Prime Minister Alexis Tsipras and the country’s creditors. The July 6 date stems from the vote in the Greek parliament over the weekend to hold a July 5 referendum allowing Greek citizens to vote on the austerity program offered by creditors in exchange for extending more loans to Greece. As a result of a run on the banks as the talks disintegrated, capital controls have now been imposed in Greece, allowing Greek depositors to withdraw no more than just €60 a day (about $66). Moody’s is out with a report this morning indicating that private sector deposits in the Greek banking system have diminished to approximately $133 billion, a decline of approximately $49 billion since November of last year.

This Tuesday, a loan made to Greece by the International Monetary Fund comes due, totaling 1.6 billion Euros, and it is highly unlikely that Greece will be able to make the payment, putting it officially into debt default.

How Greece will climb out of this predicament is very much in doubt. This morning its two year notes have sold off sharply with yields at one point reaching 33 percent. Although the Athens Stock Exchange is closed, Greek bank stocks trade on other international markets and they are seeing significant losses. Bloomberg Business reported this morning that “The National Bank of Greece SA plunged 30 percent in early New York trading.”

The crisis in Greece is spilling over into foreign stock and bond markets for a number of reasons. An immediate impact has been investors backing away from the bonds of other weak Eurozone countries like Portugal, Spain and Italy, pushing their yields up and bond prices down. Heretofore, adopting the Euro was seen as a permanent, irreversible position. But should Greece decide to exit the Euro to save itself from massive economic dislocations, the permanency of the Euro is thrown into doubt should other weak countries have similar difficulties.

The spillover to New York markets comes in the wake of a front page report in the Business section of the New York Times today, alerting markets to the fact that two major hedge funds, David Einhorn’s Greenlight Capital Inc. and John Paulson’s Paulson & Co. Inc. “have collectively poured more than 10 billion euros, or $11 billion, into Greek government bonds, bank stocks and a slew of other investments.”

A quote from the article sums up the situation. A corporate lawyer for various hedge funds, Nicholas L. Papapolitis, is on the ground in Athens and reports that “People are freaking out.” Papapolitis adds: “They have made some really big bets on Greece.”

Hedge funds are notorious for herd mentality. If Einhorn and Paulson are on the wrong side of Greek trades, you can bet others are as well. The Times mentions additional exposure at the following hedge funds: “Japonica Partners in Rhode Island, the French investment funds H20 and Carmignac, and an assortment of other hedge funds like Farallon, Fortress, York Capital, Baupost, Knighthead and Greylock Capital.”

The potential for losses at hedge funds is spilling over into U.S. bank stocks like Citigroup, JPMorgan and Bank of America, all down 1 to 1.8 percent in early morning trading. U.S. banks are viewed as exposed to hedge funds in multiple ways: they frequently provide loans through facilities known as prime brokerage; and according to a worrisome report from the U.S. Treasury’s Office of Financial Research earlier this month, large U.S. banks are engaging with hedge funds and private equity funds in “capital relief trades,” to make their own capital appear stronger. Unfortunately, neither shareholders nor the U.S. public nor the U.S. Treasury has any visibility on who’s holding these trades and how big they are.

Adding to the global stock market turmoil is a continuing selloff in the Shanghai Composite index in China, which is now down more than 20 percent in the past two weeks. China attempted to preempt a major market crash by cutting interest rates over the weekend. Despite this effort at market reassurance, the Shanghai Composite ricocheted in Monday trading between a loss of more than 7 percent to a gain of more than 2 percent before closing down 3.3 percent. The index had dropped 7.4 percent last Friday.

Scaring markets further was a Lehman-esque spike in the closely watched Markit iTraxx Europe index which measures moves in credit-default swaps and takes the pulse of how the market perceives the credit worthiness of corporate debt issuers. The cost to buy insurance (a credit default swap) on the debt of banks and financial companies spiked in overnight trading.

A recurring sentiment heard throughout international markets is that the Greek people have been humiliated by their lenders. The UK Telegraph wrote the following over the weekend:

“…the humiliation now being heaped upon a proud and ancient country is a salutary lesson to all member states – that without the power to make their own decisions they are always at the mercy of the unelected bureaucrats and financiers who run the institutions. The democracy that was born in Greece more than two millennia ago no longer applies when control over the currency and economic policy is handed to a supranational body. The question of whether the price is any longer worth paying is not one for the Greeks alone to answer.”