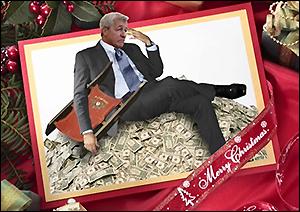 The General Accountability Office (GAO) released a sobering study yesterday that looks at how much 55-64 year olds have been able to set aside for retirement. The short answer is: excruciatingly too little. Why that is happening can best be summed up by a headline out this morning at Bloomberg News: Jamie Dimon Becomes Billionaire Ushering in Era of the Megabank.

The conclusion to draw from this study is that millions of Americans will never be able to stop working, to enjoy a financially-worry free retirement, to have a nest-egg into their 80s, or even to eat nutritionally balanced meals in retirement because Wall Street’s megabanks that Jamie Dimon concocted with Sandy Weill have eaten America’s lunch – and its future. Occupy Wall Street was right: the megabanks got bailed out; Americans got sold out – and are still being sold out by the self-declared felonious megabanks who have found ever creative ways of siphoning off trillions from the pockets of the working class while paying back pennies on the dollar, courtesy of the revolving-door regulators and sycophants in Congress.

On June 18 of last year, the Senate held a hearing on one of the myriad of Wall Street’s wealth transfer schemes: high frequency trading. Senator Elizabeth Warren aptly described the scheme:

Another core component of Wall Street’s asset-stripping devices is the 401(k) plan which has replaced most of the Defined Benefits plans that previously provided a fixed income in retirement which, together with Social Security, allowed Americans to live in dignity during retirement.

As Frontline’s Martin Smith exposed in The Retirement Gamble on PBS in April 2013, under a 2 percent 401(k) fee structure, almost two-thirds of your working life will go toward paying obscene compensation to Wall Street; a little over one-third will benefit your family – and that’s before paying taxes on withdrawals to Uncle Sam.

This is the relevant portion of the transcript from the program:

John Bogle [Founder of the low-cost Vanguard Funds]: Costs are a crucial part of the equation. It doesn’t take a genius to know that the bigger the profit of the management company, the smaller the profit that investors get. The money managers always want more, and that’s natural enough in most businesses, but it’s not right for this business.

Smith: Bogle gave me an example. Assume you’re invested in a fund that is earning a gross annual return of 7 percent. They charge you a 2 percent annual fee. Over 50 years, the difference between your net of 5 percent — the red line — and what you would have made without fees — the green line — is staggering. Bogle says you’ve lost almost two thirds of what you would have had.

Bogle: What happens in the fund business is the magic of compound returns is overwhelmed by the tyranny of compounding costs. It’s a mathematical fact. There’s no getting around it. The fact that we don’t look at it— too bad for us.

Smith: What I have a hard time understanding is that 2 percent fee that I might pay to an actively managed mutual fund is going to really have a great impact on my future retirement savings.

We confirmed the above math in detail in a related article.

To summarize all of the above – your lifetime of work and saving for retirement have been about making the Jamie Dimons of Wall Street billionaires. Wall Street mega banks seized millions of homes through illegal foreclosures in the lead up to the 2008 collapse. They got away with it. The banks themselves, not regulators, then got to determine the number of people they had victimized. The megabanks further enriched themselves making bets that the housing market would collapse, using their inside knowledge of the bogus loans they had made. None of the banking titans went to jail for that either. They simply paid back pennies on the dollar. One of the hedge funds titans involved in that scam didn’t pay back a dime of the $1 billion he made, didn’t get prosecuted, but, instead, got an auditorium named after him at NYU and an award during this year’s NYU commencement.