Suspicions About the Federal Reserve Spill Out in House Hearing 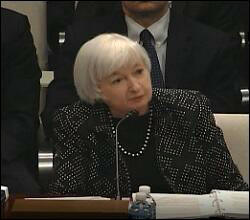 Fed Chairman Janet Yellen fielded questions last Wednesday before a combative House Financial Services Committee. Tempers flared, fingers stabbed the air, arms waved wildly as House reps expressed pent up frustrations with how the Federal Reserve is handling the economy. At times, Yellen answered curtly and at one point rolled her eyes at questioning from Congressman Scott Garrett (R-NJ) who insinuated that Yellen had politicized her office by meeting so frequently with President Obama and Treasury Secretary Jack Lew.

The anger and frustration were evident from both sides of the aisle. Congressman Michael Capuano, (D-MA), was incensed that the largest, most dangerous Wall Street banks are still being allowed to fail their living wills. Capuano read a portion of a statement from FDIC Vice Chair, Thomas Hoenig, which stated that these living wills “provide no credible or clear path through bankruptcy that doesn’t require unrealistic assumptions and direct or indirect public support.”

Capuano barked at Yellen “if they don’t meet your requirements at the third try, what you said is…something along the lines that you’d be upset.” Yellen responded that what she had said was “we will find them to be not credible if we do not see progress…” Capuano interrupted in frustration: “Would you break them up?” Yellen responded that the banks would have two years to show that they had made changes.

Visibly showing disgust at the answer, Capuano said: “So five years after Dodd-Frank, they still have potentially three years before there are any serious consequences to prove to you that they no longer offer a threat to the entire U.S. economic system.” Yellen responded that the Fed had put higher capital standards in place. Capuano said that these capital standards have been found insufficient by everyone who studies these matters “except the Fed.”

Congressman Brad Sherman (D-CA) asked Yellen about the fact that the New York Fed represents less than 20 million people in their district but has a permanent seat on the Federal Open Market Committee which sets monetary policy. He said the San Francisco Fed represents 65 million people – three times more than New York. He argued that New York isn’t three times more important than San Francisco and asked if Yellen would support a permanent seat on the Fed for the San Francisco Fed. Yellen said that would take Congressional action.

Sherman also questioned Yellen about plans at the Fed to take away the “punch bowl,” that is, hike interest rates. Sherman said that members of the committee were in touch with constituents in their various districts and said “It ain’t good out there.” 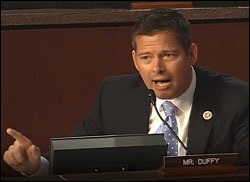 Following accusations of political bias from Congressman Garrett early in the hearing, Congressman Sean Duffy (R-WI) picked up on the same theme later in the hearing. Duffy asked about a speech Yellen gave two weeks before the Presidential election on income inequality, grilling Yellen on which political party was pushing that same theme. Yellen said she had heard politicians on both sides of the aisle lament income inequality. Duffy aggressively sparred with Yellen, saying that if he polled everyone in the room as to which party made income inequality a political issue in the last election, everyone would get it right.

Congressman Al Green (D-TX) asked about the chasm that’s developing between the very, very rich and the rest of us. Yellen said all of us treasure living in a society where people who work hard and play by the rules can get ahead and we’ve seen that in this country generation after generation. Yellen said the rise of income inequality has been “inexorable” since the 1980s. 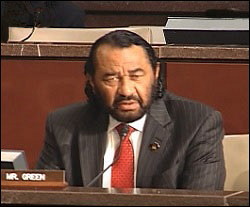 What wasn’t addressed in the hearing is that the rise of $1 trillion and $2 trillion dollar Wall Street banks has accompanied the rise in income inequality. It’s really quite a simple matter. These mega banks have served as an institutionalized mechanism to asset strip the middle class and the poor through outrageously high interest rates on credit cards, mortgages, management of 401(k) plans where two-thirds of a worker’s assets are stripped away over a lifetime of work.

These mega banks have collected the vast majority of deposits in the country and are now using those very deposits against the middle class and the poor. Instead of making prudent business loans and paying a higher rate of interest from those loans to depositors, banks have turned the deposits into a source of low-cost capital for casino bets while the Fed has looked the other way without meaningful regulatory response.

No clearer example exists than the London Whale episode at JPMorgan Chase. Rather than use its own capital to make wild derivative bets to boost profits for the house, JPMorgan used depositors’ money in its insured bank unit. It had been doing this for some time but was caught in 2012 when the press reported the bets had grown so large that they were distorting the market. At least $6.2 billion of bank deposits were lost in that operation.

JPMorgan’s national bank supervisor, the Office of the Comptroller of the Currency (OCC) found that “The credit derivatives trading activity constituted recklessly unsafe and unsound practices,” and “was part of a pattern of misconduct….”

Since that time, JPMorgan has been repeatedly charged with one violation after another. And yet, the Federal Reserve has not broken it up. The anger on the House Financial Services Committee is a tepid reflection of the growing anger among average Americans at the gross incompetence of the Federal Reserve as a regulator.