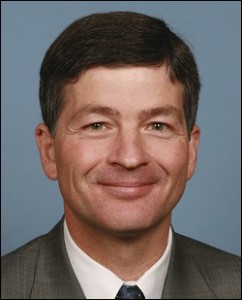 The Republicans are making good on their campaign pledge to turn up the heat on the Federal Reserve. Sparks flew in the House Financial Services Committee hearing room yesterday as Fed Chair Janet Yellen appeared to present her semi-annual testimony. At times, the exchanges between Yellen and Republican members of the Committee were sharp and tense.

In his opening statement to the Committee, Jeb Hensarling (R-Tx), who chairs the Committee, blamed the “anemic” recovery on Obamacare, Dodd-Frank and regulatory costs. He went on to say that “Then there’s the doubt, uncertainty and regulatory burden that grows as more and more unbridled, discretionary authority is given to unaccountable government agencies.  Although monetary policy cannot remedy this, it can help.”

Republicans are locked in some kind of mind warp where the remedy for every problem is to deregulate. Despite six years of books, academic studies, investigative findings, and a 600-page report from the Financial Crisis Inquiry Commission proving that deregulation was responsible for the financial crash of 2008 – the greatest financial implosion since the Great Depression – Republicans refuse to let facts get in the way of pushing for more deregulation.

Democrats on the other hand, despite overwhelming proof that the Dodd-Frank Wall Street Reform and Consumer Protection Act has actually allowed Wall Street to grow systemically more dangerous and more corrupt since its passage, is irrationally wedded to this legislation.

Then there is the New York Fed – the least appropriate body in all the world to be simultaneously carrying out monetary policy via instructions from the Federal Open Market Committee with the involvement of the biggest Wall Street banks while simultaneously attempting to engage in regulatory oversight of the same banks. (See related articles below.)

On Tuesday, Senator Richard Shelby (R-Ala), chair of the Senate Banking Committee indicated he is aware of the conflicted role of the Fed in regulating Wall Street banks. In his opening statement prior to Yellen’s appearance before that body, Shelby said:

“Our central bank has expanded its influence over households, businesses and markets in recent years. Not only has it pushed the boundaries of traditional monetary policy, but it has also consolidated unmatched authority as a financial regulator. As the Fed grows larger and more powerful, much of this authority has become more concentrated in Washington, DC and New York.

“The Fed emerged from the financial crisis as a super-regulator, with unprecedented power over entities that it had not previously overseen. With such a delegation of authority comes a heightened responsibility for Congress to know the impact these new requirements place on our economy as a whole.

“The role of Congress is not to serve on the Federal Open Market Committee.  But, it is to provide strong oversight and, when times demand it, bring about structural reforms.

“As part of this process, the Committee will be holding another hearing next week to discuss options for enhanced oversight and reforming the Fed.”