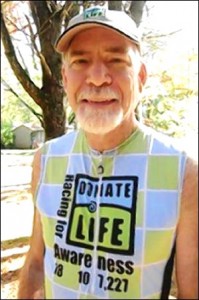 Wall Street Journal oil reporter, David Bird, set out from his New Jersey home for a brief walk on January 11, 2014 and disappeared without a trace. Last Wednesday, 14 months after his disappearance and the very same day David Bird’s family had launched a web site to urge the public to help them locate their beloved husband and father, Bird’s body was found in the Passaic River. It was conclusively identified through dental records.

A search had been underway for Bird since the evening of his disappearance. He had left his home on Long Hill Road in the Millington section of Long Hill Township, New Jersey to take a short walk. The circumstances were inconsistent with someone who intended to disappear: he was wearing a bright red jacket with yellow zippers; he was a recipient of a liver transplant and did not take the anti-rejection, prescription medicine that he was required to take daily to stay alive.

The Morris County Prosecutor’s office released a statement on the discovery of the body last Wednesday, indicating that “at approximately 5:00 pm two (2) men canoeing in the Passaic River came across a red jacket located near branches…” More than a dozen neighboring police, fire and rescue departments were called in. Search boats were supplied by the Whippany Fire Department, Millington Fire Department and Berkeley Heights Fire Department. The Denville Dive Team was also called in according to the official statement. The body of Bird was located the same evening in the Passaic River, about 20 feet from the shoreline according to NJ.com.

How a veteran reporter for the Wall Street Journal set out for a brief walk and ended up in the Passaic River is now the subject of an ongoing investigation. The cause of death will be released at a future date by the Medical Examiner’s office.

Wall Street On Parade emailed the Morris County Prosecutor’s office to make a number of inquiries, one of which was what the two men were doing in the canoe at 5 pm. Temperatures in the Northeast were quite cold last week. The prosecutor’s office responded that “The canoers information on what they were doing could not be released.”

David Bird was one of the most knowledgeable oil reporters in business media. On the discovery of his body, Gerard Baker, Editor-in-Chief of the Wall Street Journal, a part of Dow Jones, which is, in turn, owned by Rupert Murdoch’s News Corp, wrote the following in a memo to staff:

“David was among the most respected energy journalists anywhere – a must-read for energy-market professionals, known as an acute observer and commentator on the global oil market…He first joined Dow Jones more than three decades ago and eventually became the deputy managing editor of the Dow Jones Energy Service. He was instrumental in the expansion of energy coverage at Dow Jones in the 1990s, leading its coverage of OPEC and energy markets and building a team regarded as among the best in business. He later launched a highly regarded column on the topic.

“Well-sourced among the world’s most influential oil ministers, David would regale younger reporters with stories about what went on behind the scenes at some of the most historic OPEC meetings. His ability to navigate the vast troves of public oil data was unmatched. At 10:30 a.m. on Wednesdays, he could often be seen hunched over his computer, sifting through spreadsheets and crunching numbers just released by the Energy Information Administration. He was often the first to gain insight into important energy-market trends.”

That type of asymmetric knowledge about the massive data banks of the Energy Information Administration and OPEC trends, led Bird to make prescient observations in 2013 on the very situation the U.S. finds itself in today in terms of an oil price collapse, a rising U.S. Dollar constricting global growth, the Federal Reserve’s role in the strength in the Dollar, and the disarray in OPEC.

Less than five months before his disappearance, Bird wrote in a Wall Street Journal article on August 21, 2013 when oil was trading at over $103, more than twice where the price is today, that “Crude-oil futures fell after the minutes from the Federal Reserve’s latest policy meeting heightened concerns that less economic stimulus could hit demand for the fuel. Traders are worried that the end of the $85 billion-a-month bond-buying program will cause dollar-based crude prices to rise in local-currency terms, choking off economic growth in India, Indonesia and other emerging markets that has fueled a rise in global oil consumption in recent years.”

In the same article, Bird wrote that Bill O’Grady, the Chief Market Strategist at Confluence Investment Management, was concerned about a steep drop in oil prices after Labor Day. The quote from the article reads as follows: ” ‘All this tapering talk is absolutely deadly for emerging markets’ because of its effect on the dollar, Mr. O’Grady said. ‘We could see [oil] demand really tail off.’ ”

Today, oil prices have collapsed, emerging markets are feeling the economic pain of a rising U.S. Dollar, OPEC has lost its control of oil prices in the face of macroeconomic forces, and global growth estimates for this year continue to be ratcheted downward.

On December 2, 2013, the month prior to his disappearance, Bird wrote an article headlined “OPEC Faces Challenges to Maintain Oil-Market Stability.” In the article, Bird noted that “circumstances could test the limits of OPEC’s ability to hold prices steady over the next 1,000 days.”

Bird raised the possibility that the only prop under the price of oil as far back as 2013 was tumult in the Middle East and other potential supply disruptions like talk of the Iran embargo. Bird wrote: “The 1,000-day average of the basket price belies broad swings in the measure of 12 grades of OPEC crude, from a low of $66.84 in May 2010 to a peak of $124.64 in March 2012, when the Iran embargo was being considered.”

Bird noted in the same article that “Oil supply from the U.S. and Canada has grown by a combined 4 million barrels a day in the period. Growth in non-OPEC supply is expected to top the rise in global demand next year, meaning OPEC would need to pump less or risk a price drop.”