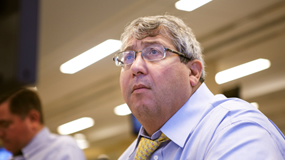 Increasingly, the Federal Reserve appears to be telling Americans: don’t believe your lying eyes — or ears.

Yesterday afternoon, Steve Ricchiuto, Chief U.S. Economist at Mizuho Securities USA, gave a gutsy interview on CNBC where he called into further question the Fed’s kooky talk of an accelerating economy that needs a rate hike to rein it in. Ricchiuto has a Masters Degree in Economics from Columbia University – one of those pesky, street smart guys who know a load of bull when he hears it and doesn’t mind telling you so.

Ricchiuto had this to say on CNBC:

“The deflation story is very, very critical but there’s also this wrong concept that I keep hearing over and over again in the financial press about this acceleration in economic growth. That isn’t happening. Last month we had a horrible retail sales number. We had a horrible durable goods number. We’re likely to have a very disappointing retail sales number coming forward. This month we’ve had a strong payroll number – we say everything’s great. It’s not great. It’s running where it’s been. It’s been the same thing for the last five years. There’s no improvement in the economy.”

Where is the financial press getting the idea “about this acceleration in economic growth”? From the Fed, of course. In its last monetary policy statement on January 28, the Federal Open Market Committee assured all of us that “economic activity has been expanding at a solid pace” with “strong job gains.” Not to put too fine a point on it, but this is the same central bank that didn’t see the greatest crash since the Great Depression stampeding at us in 2007 or early 2008.

The Fed’s touting of “strong job gains” stands in stark contrast to mushrooming announcements of jobs cuts in the thousands by energy-related companies and retailers. The job cuts in the energy sector are the result of a 60 percent plunge in oil prices in the span of six months because of a global economic slowdown while the bankruptcies and retrenchment in U.S. retail results from a cash-strapped consumer who has been forced to tighten the family belt because of exactly what Ricchiuto is talking about: no significant economic or wage gains in five years.

Last week Wall Street On Parade reported on the accelerating demise of retailers like RadioShack, Wet Seal, Cache, Body Central, Deb Shops, and Delia’s. Other chains are in serious retrenchment mode. Target has announced it will close all 133 of its Canadian stores and is sending out termination notices to the “vast majority of 17,600 employees,” according to the Toronto Star.

In addition to bankruptcies and store closings in retail chains, consolidation looks like the next big wave. Last week, Staples announced its plan to acquire its main rival, Office Depot, which only last year bought another rival, Office Max. The new deal is likely to result in 1,000 store closings according to a report in the Philadelphia Inquirer, citing an analysis from retail analyst David Strasser of Janney Capital Markets.

It doesn’t take long for thousands of retail store closings and tens of thousands of job cuts in the energy sector to ripple through the broader economy. Janney’s analyst Strasser told the Inquirer that the store closings resulting from the Staples/Office Depot merger could reduce revenue to commercial landlords by $350 million a year and trim combined advertising budgets by $400 million — another hit to the struggling newspaper sector.

Yesterday, Halliburton became the latest energy-sector company to announce massive job cuts, saying it will eliminate 6,400 jobs – about 8 percent of its workforce. That news comes on the heels of an announcement by Schlumberger in January that it planned to eliminate 9,000 jobs while Baker Hughes announced in the same month its plan to trim 7,000 workers. Both companies also announced large cuts to capital spending.

One pivotal piece of data that the wonks at the Fed may be missing in their forecasts is the outsized role that capital spending by energy-related companies plays in the U.S. economy. The energy sector accounts for between 35 to 40 percent of all capital spending in the United States. Retrenchment in those outlays ripple through quickly, forcing suppliers and subcontractors to trim their own budgets and payrolls accordingly.