Is a Strong Dollar Good or Bad for the U.S. Economy? 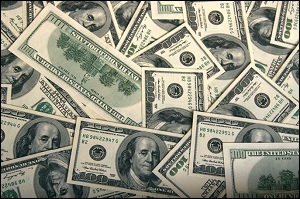 The “thriving” U.S. economy as reported in a Bloomberg News headline this morning – a characterization which supports the U.S. central bank’s position and little else – was further undermined by the 8:30 a.m. release of retail sales for January, which dramatically undercut analysts’ estimates and came in at a decline of 0.8 percent. January’s drop followed a negative 0.9 percent reading in December.

Consumer spending represents roughly 70 percent of Gross Domestic Product (GDP) growth in the U.S. If the consumer is retrenching, despite all the prognostications for all that extra money sluicing through their bank accounts from cheaper gas at the pump and lower heating fuel bills, the economy can hardly said to be “thriving.”

The troublesome headline at Bloomberg News this morning was this: “Who’s Afraid of the Rising Dollar? Not the Thriving U.S. Economy.” The article, by Shobhana Chandra and Christopher Condon, delivered the comforting message that you needn’t “believe everything you hear about the corrosive effect a more expensive dollar has on corporate America. U.S. businesses and the world’s largest economy can handle the greenback’s strength just fine.”

After dismissing a notable list of America’s largest companies who groused in their earnings announcements that the strong dollar had indeed crimped their profits in 2014, the authors write: “The bigger picture is hardly so dire. Viewed as a whole, American business is much less vulnerable to the dollar’s rise than are the U.S.-based multinational giants. The exchange rate poses an even smaller threat to U.S. economic growth, which wrapped up its best year since 2010. While a strong dollar may weaken exports, it also means cheaper oil, less costly goods from overseas and continued low inflation — all good things for an economy that’s powered by consumer spending.”

The authors breeze over a long list of serious problems being delivered to the U.S. economy from the strong dollar. The U.S. dollar is being talked up by the Federal Open Market Committee of the Federal Reserve on pronouncements of “solid” economic growth which warrants a rate hike from its zero bound interest rate policy which went into effect an unfathomable six years ago on December 16, 2008.

After using the bully pulpit to convince other countries to adopt its favored remedy of quantitative easing to crawl out of a lethargic economic growth pattern, it won’t be pretty if the U.S. has to admit that the Fed ballooned its balance sheet to $4.5 trillion dollars, has little to show for it in the way of economic growth, and now has to dive into massive stimulus spending to ward off deflation.

The strong dollar also raises the very serious threat of the U.S. importing deflation from other countries. At the end of last year, ten of our trading partners were experiencing outright deflation while another seven showed inflation of less than one-half of one percent. As the currencies of many of those countries weaken against the U.S. dollar and their exports flow to our shores, the U.S. consumer’s dollar is buying imported goods at ever lower prices, pushing inflation lower in the U.S. and raising the risk of outright deflation.

Those who have not studied the intractable specter of deflation during the Great Depression have no understanding of how consumers mentally react to falling prices. The mindset becomes to postpone purchases because one will get a cheaper price in the future.

On January 27 of this year, Jeffrey Gundlach, the bond maven who co-founded DoubleLine Capital in 2009 and correctly predicted that Treasury yields would plunge in 2014, told CNBC’s Bob Pisani in an interview what he thought was really behind the Fed’s purported plans to hike rates.

“They say something contradictory. This is part of the gibberish. They say their mandate is stable prices but they define stable as rising two percent per year. Which, last time I checked, was not the definition of stable. But, anyway, their goal is two percent a year – you haven’t been at two percent a year in like forever – and it’s going the other way.

“So what is the logic for raising short term interest rates? I think the logic is that they don’t like having no tools. So that when and if the economy rolls over, if you’re at zero at that time, you’re in a very bad situation.”

The Fed may also feel that keeping the U.S. consumer in an information vacuum and pumping out the thesis of a “thriving” U.S. economy to an obliging corporate media will encourage more consumer spending. The decidedly dangerous part of that plan is twofold. First, the Fed will have lost credibility when it comes time to urge Congress to ramp up fiscal stimulus to reboot the economy. Secondly, it may already be seriously behind the curve in removing its foot from the brake and stepping on the throttle.