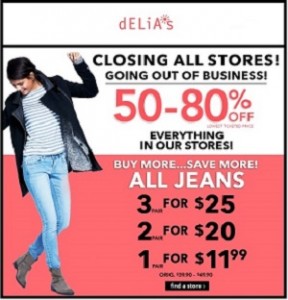 Delia’s Is Among a Growing List of Retailers Filing for Bankruptcy, Closing Stores, or Liquidating

It was just last Wednesday that the U.S. central bank, the Federal Reserve, released its monetary policy statement and reassured the markets that “economic activity has been expanding at a solid pace” with “strong job gains.” This cheery U.S. news came on the heels of recent action by seven foreign central banks to slash interest rates and/or pump more stimulus funds to head off an economic train wreck around the rest of the globe.

What’s happening among U.S. retailers is also not suggesting strong job gains. Since December, there has been a steady pace of bankruptcy filings and announcements by retailers  to close all stores and liquidate as opposed to re-emerging eventually from bankruptcy and saving jobs.

Last evening, the Wall Street Journal reported that Radio Shack, which employed approximately 24,000 workers as of late last year and operates more than 4,300 stores in North America, planned to file for bankruptcy, possibly as early as today. Shares of its publicly traded stock closed at 27 cents on Friday, strongly suggesting there will be serious job losses ahead at the company.

In early January, Wet Seal, a familiar fashion name in upscale malls, announced it was closing 338 stores and laying off 3,700 employees. On January 15, the company filed for bankruptcy protection. The company’s stock closed at just under 3 cents on Friday.

One week after Wet Seal’s bankruptcy filing, C. Wonder, a company founded by fashion mogul Chris Burch (ex-husband of fashion designer Tory Burch) announced it was filing for bankruptcy and liquidating all 32 store locations. The company was less than four years old.

On January 9 of this year, teen clothing retailer, Body Central, announced it was closing all 265 of its stores, terminating 2,500 workers, and making an Assignment for the Benefit of Creditors (ABC filing), a process handled in State Court that is similar to a bankruptcy liquidation.

The January 2015 retailing announcements follow more bad news the month prior from Deb Shops and Delia’s, both announcing bankruptcy filings, liquidations and the closure of all stores.

Delia’s was a popular teenage girl’s fashion store in the 90s, starting out as a catalog business in 1993. It was also a publicly traded stock, meaning investors are also feeling the pain. Delia’s shares closed at .0031 cents on Friday. Deb Shops’ is closing all 287 of its stores nationwide. Its web site is now a one-page affair, which notes that gift cards will only be accepted through March 8, 2015.

Just this past Friday, Bloomberg News reported that Cache, another women’s fashion retailer located in upscale malls, plans to file bankruptcy and close all of its 237 stores which are spread over 43 states. The company dates back to the mid 1970s. The report from Bloomberg News noted that “While it’s possible a last-minute buyer could emerge for the chain, Cache is unlikely to continue operating,” according to Bloomberg sources. The company’s stock closed at 4 cents on Friday.

Canadian workers will also bear the brunt of a decision by Target to close all of its 133 stores in Canada. According to an article in today’s Toronto Star, “notices of termination have been sent to the vast majority of 17,600 employees – almost half of whom work at Target stores and offices in Ontario.”

Sears is also struggling under the weight of losses and plunging revenues. In December it announced it would close 235 underperforming stores. Sears operates more than 1,800 Sears and Kmart stores.

While much of the business press has focused on the impact of plunging oil prices and a global glut of oil costing jobs in the oil patch, the fact that so many retailers are entering bankruptcy with no plans to continue as a going concern, suggests there is another glut of excess supply and too little demand in the retail space. That phenomenon is totally consistent with the unprecedented income and wealth inequality which is exhibiting itself around the globe and here in the U.S. – notwithstanding the happy talk from the Fed.