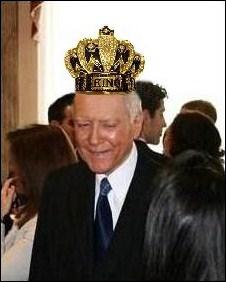 Does Senator Orrin Hatch Believe He Wears a Crown?

Senator Orrin Hatch, Republican from Utah, is not the Chairman of the Senate Finance Committee. That post is held by Democrat Ron Wyden – whose party currently holds the majority of seats in the Senate. But this Tuesday, in a hearing that he was not even chairing, Senator Hatch appeared to be attempting to censor the speech of the witnesses before they testified by admonishing them not to use a list of specific words and phrases.

The hearing was convened to take testimony on the retirement crisis facing millions of Americans because of the disappearance of corporate funded pensions and the inability of most Americans to build up a sufficient nest egg on their own because of stagnant wages and 401(k) fees imposed by Wall Street eating up their savings.

Hatch, with a stern face, told the panelists: “What I hope to not hear today are poll-tested slogans like ‘Upside Down Tax Incentives,’ ‘Bang for the Buck,’ ‘Pension Stripping,’ or ‘The System is Rigged’ without substantiating data.  We need to hear facts and serious policy proposals, not political slogans.”

The missing witness was Ellen Schultz, a former investigative reporter for the Wall Street Journal who has documented for more than a decade that the retirement system is actually rigged and that serious pension stripping is taking place. Schultz went on to write the seminal work on the subject in 2011: Retirement Heist: How Companies Plunder and Profit from the Nest Eggs of American Workers.

It seemed more than a little curious to us that Schultz was going to be delivering the very testimony that Senator Hatch did not want to hear and that hers was the only chair at the six-witness table that remained empty throughout the hearing. Senator Wyden said that she was having Amtrak trouble. Our email to Schultz inquiring about the reason for her absence went unanswered.

Hatch seemed absolutely defiant to admit that there is anything seriously wrong with the current system, stating that Congress has “been able to craft good policy” and the real problem is just “another front in the class warfare.”

Senator Hatch may have gone on the offensive as a result of a report released by the Government Accountability Office (GAO) in conjunction with this hearing. The GAO’s hard data, the very kind demanded by Hatch, had come directly from 2011 tax filings with the IRS. It found that 314 taxpayers had squirreled away $81 billion in Individual Retirement Accounts (IRAs) – or an average of $258 million each. This report follows on the heels of a Federal Reserve study which found that the median worker had $59,000 in his or her retirement account.

The tax benefits of retirement accounts, in other words, are just like income and wealth in the United States: they are flowing to a select few. And this wealth and income concentration is a serious matter of national security as it is impeding the ability of the U.S. to grow, create jobs and reduce the national debt.

If a system is rigged, no other word captures the essence of what is going on other than the word, “rigged.” If that word happens to be offensive to one Senator’s delicate ears, his chair should become empty.

Shultz, the winner of three Polk Awards, two Loeb awards, a National Press Club award and a Wall Street Journal team Pulitzer, might have offered some of the following hard data from her book, had her chair been occupied during the hearing.

One set of hard data is the hundreds of billions of dollars of life insurance policies on rank and file workers that corporations are taking out, payable to the corporation, to offer obscene executive compensation and benefits while the average American taxpayer/worker subsidizes the practice: the growth in the policies are booked as untaxed income to the corporation, boosting their profits, and the death benefit is received tax free – all perks of the life insurance wrapper.

Schultz has a chapter in her book titled “How Dead Peasants Help Finance Executive Pay,” writing that “as the costs of salaries and benefits for executives have put huge IOUs on corporate books, companies have begun stuffing billions of dollars into new and existing life insurance contracts taken out on the lives of their employees. The insurance policies serve as pseudo pension funds for executives: companies deposit money into the contracts, which act like giant IRAs.”

While key man life insurance is a justifiable practice for a corporation — where a company insures the lives of its primary principals whose loss would have a significant impact – Corporate Owned Life Insurance (COLI) has become known as dead peasant insurance. Corporations are taking out this insurance in bulk on hundreds of thousands of rank and file workers.

Shultz points to evidence in her book that companies even have the temerity to complain when workers don’t die as expected. Schultz writes:

“In a confidential memo in 1991, an insurance agent wrote to Mutual Benefit Life Insurance Co. that American Electric Power (20,441 employees covered), American Greetings (4,000), R.R. Donnelley (15,624), and Procter & Gamble (14,987) were ‘acutely aware’ that mortality was running at only 50 percent of projected rates.

“Diebold, the agent wrote, had been expecting $675,300 in death benefits since adopting the plan; so far, it was expecting only one ‘mortality dividend’ of $98,000. ‘Do you think that a mortality dividend of that size relative to their current shortfall will give them comfort?’ the memo said.

“A company the agent called NCC had a better death rate, he noted. People were dying at 78 percent expected mortality. ‘However, this includes three suicides within the first year which is highly unusual’— NCC had not had one suicide in twenty-five years until 1990. ‘Without these suicides, NCC would be running at 33% expected mortality. This fact highly concerns me.’ ”

Tuesday’s hearing before the Senate Finance committee is further proof that the 14 percent approval rating of Congress has some justifiable roots.