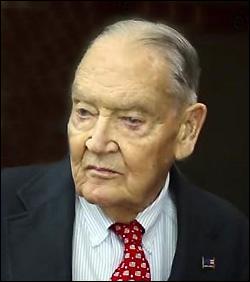 Tax lawyers do not typically blow the whistle on their corporate employers because that law degree cost them (or their parents) a serious amount of money; the degree will result in outsized lifetime earnings; and, most importantly, because it is career suicide. Even when the tax lawyer may believe there is fraud that would trump the attorney-client privilege, whistle blowing in a court of law against one’s employer is a rarity for a tax lawyer.

In his whistleblowing lawsuit, unsealed last month in New York State Supreme Court, Danon names only Vanguard Group, Inc. and two subsidiaries as defendants. But by calling the company a major tax cheat, Danon is challenging the reputation of Bogle and the company’s Big Four accounting firm, PricewaterhouseCoopers (PwC).

Danon went to work for Vanguard in Pennsylvania in August 2008, according to his LinkedIn profile. He continued to work there for the next 4 years and 11 months until June 2013. The month prior to his departure, on May 8, 2013, Danon filed his 40-page, sealed whistleblower lawsuit, making breathtaking claims against his employer, such as the following:

“Vanguard has operated as an illegal tax shelter for nearly forty years, providing services to the Funds at prices designed to avoid federal and state income tax, sheltering hundreds of millions of dollars of income annually, avoiding approximately $1 billion of U.S. federal income tax and at least $20 million of New York tax over the last ten years.”

By claiming that Vanguard has been running an illegal tax shelter for 40 years, Danon is aiming his slings and arrows right at the armor of its founder. Bogle started Vanguard in 1974; served as its CEO until 1996; and as Senior Chairman and Director until 2000. Bogle is still affiliated with the company as President of Vanguard’s Bogle Financial Markets Research Center.

One specific charge that Danon makes in his complaint may be tough to prove as a devious effort to dodge taxes. Danon states:

“Vanguard violates Section 211(5) and Section 482 by providing services to the Funds at artificially low, ‘at-cost’ prices. As a result, Vanguard shows little or no profit and pays little or no federal or state income tax despite managing Funds with nearly $2 trillion in assets.”

This at-cost pricing is so transparent at Vanguard that John Bogle explained it in testimony he gave to the U.S. Senate on November 3, 2003 when he was invited to lecture his industry on “Trading Practices and Abuses that Harm Investors.” In his written testimony submitted to the Senate, Bogle wrote:

“Vanguard was created as a mutual organization, with its member mutual funds as the sole owners of the management company, Vanguard Group, Inc.  The company operates the funds on an ‘at-cost’ basis.  Essentially, we treat our clients — the fund shareholders — as our owners, simply because they are our owners.  We are the industry’s only mutual, mutual fund enterprise…”

This certainly makes what Vanguard was doing all these decades look pretty much like an open book that Congress and the IRS and PricewaterhouseCoopers understood to be legitimate. Vanguard even has a full page with graphs explaining further its structure and how it benefits the average investor in its mutual funds. One section explains:

“The typical fund management company is owned by third parties, either public or private stockholders, not by the funds it serves. These fund management companies have to charge fund investors fees that are high enough to generate profits for the companies’ owners. In contrast, the Vanguard funds own the management company known as Vanguard—a unique arrangement that eliminates conflicting loyalties. Under its agreement with the funds, Vanguard must operate ‘at-cost’— it can charge the funds only enough to cover its cost of operations. No wonder Vanguard’s average fund expense ratio in 2013 was 0.19%, less than one-fifth that of the 1.08% industry average. That means Vanguard fund investors keep more of any returns their funds earn.”

Bogle is no slouch when it comes to accounting. This is an excerpt from testimony he gave to the Public Company Accounting Oversight Board on March 21, 2012:

“I’m pleased to have this opportunity to comment on my general views on auditor independence and specific views on audit firm rotation. I have been an observer of and participant in auditing issues throughout my 60-year career, most recently as one of four independent members of the Independence Standards Board (from 1997 to 2001, when it ceased operations), appointed by SEC Chairman Arthur Levitt, where we worked with the four CEOs of the major accounting firms to establish more rigorous standards for assuring that our public accountants remained truly independent of the firms that retain them for attestation services…”

In that same testimony, Bogle notes that two of his books, Don’t Count On It! and The Battle for the Soul of Capitalism deal with significant accounting issues.

At the risk of a very bad pun, it is simply mind-Bogleing that John Bogle or PricewaterhouseCoopers would not have gotten an all-clear letter from the IRS on this structure at some point over the past four decades.

The takeaway for investors is this: high mutual fund fees are already gobbling up your hopes to ever retire in comfort. As Frontline’s Martin Smith exposed in April of last year, if you’re receiving the typical long-term return of 7 percent on your 401(k) plan and your fees are 2 percent, almost two-thirds of your account will go to Wall Street over the course of your career. If Vanguard, the low-cost mutual fund provider is forced to restructure itself and incur higher operating expenses and taxes, the small investor loses.

Against that backdrop, it should also be noted that David Danon, should he prevail in his lawsuit, would be entitled to collect a portion of the back taxes owed by Vanguard.

See Vanguard Complaint Filed by David Danon for the full text of the lawsuit.