As Wall Street On Parade reported last week, Jeffrey Kleintop, Chief Market Strategist for LPL Financial, reports that corporations are now the single largest buying source for U.S. stocks – authorizing buybacks of their own stocks to the tune of $754.8 billion in 2013 alone.

And it’s a long-term trend. According to Birinyi Associates, for calendar years 2006 through 2013, corporations authorized $4.14 trillion in buybacks of their own publicly traded stock in the U.S. — raising the question, just what kind of a bull market is this?

According to JPMorgan’s most recent quarterly report filed with the Securities and Exchange Commission, “the Firm’s Board of Directors has authorized the Firm to repurchase $6.5 billion of common equity between April 1, 2014, and March 31, 2015.”

If the full authorization of $6.5 billion is spent by the first quarter of next year, JPMorgan will have tapped its capital to the tune of $24.5 billion – not to lend to deserving businesses or home buyers or consumers, but to binge on its own stock buybacks.

Having a steady pool of billions of dollars to prop up a stock’s share price might seem like a neat trick to top corporate executives whose compensation is tied, in part, to the performance of the company’s stock, but it does little to help a nation struggling from the aftermath of the economic ravages unleashed by the big bank financial crash in 2008.

U.S. GDP was negative at -2.9 percent in this year’s first quarter. The U.S. Bureau of Labor Statistics shows a current labor force participation rate of just 62.8 percent, the lowest rate since the late 1970s and owing in part to discouraged workers who have given up on looking for a job. Surely using capital to grow a business and create good jobs should trump retiring stock.

There are other reasons to worry about this binge in stock buybacks. First, many corporations are borrowing heavily to fund these buybacks. There is also a concern that the public is given very little information about how these buybacks are conducted and by whom.

That concern has grown exponentially as dark pool trading data has started being released, for the first time ever, by the Financial Industry Regulatory Authority (FINRA), Wall Street’s self-regulator. (A dark pool is an unregulated stock exchange which does not make bids and offers on stocks transparent to the marketplace; a venue ripe for manipulation.) FINRA data shows that, week after week, Wall Street’s biggest banks are trading each other’s stocks in their own dark pools and, more inexplicable, the banks are being allowed to trade their own corporate parent’s stock in their own dark pools. How this is compatible with the anti-manipulation statutes of the Securities Exchange Act of 1934 has yet to be explained.

During the week of July 7 to July 11, 2014, 65.8 million shares of JPMorgan Chase traded in total on all venues, including public exchanges like the New York Stock Exchange as well as dark pools. Of that total, according to FINRA data, 11.8 million shares in the same week traded in dark pools or 17.9 percent of all JPMorgan stock traded.

Other global banks that are trading JPMorgan’s stock in their own dark pools, week after week, include UBS; Credit Suisse; Citigroup’s LavaFlow, CitiCross and Liquifi; Deutsche Bank; Goldman Sachs; Bank of America’s Merrill Lynch and Barclays.

Barclays has been charged by the New York State Attorney General, Eric Schneiderman, with lying to its customers about the role of high frequency traders in its dark pool. Barclays has asked to have the charges dismissed on the basis that Schneiderman overreached his authority. UBS announced this week that it is cooperating with a probe into its dark pool.

The accelerated pace of investigations into a long simmering pool of hubris has been stepped up since Michael Lewis launched his book, Flash Boys, with a pronouncement on 60 Minutes on March 30 that the stock market is rigged by high frequency traders and global banks.

Shortly thereafter, the FBI announced that an investigation was already in the works, the New York State Attorney General began issuing subpoenas, and FINRA attempted to look serious with a dark pool action against Goldman Sachs.

The most unsettling aspect of all of this is that the dark pool framework relies on the theory that global investment banks can be trusted to run unregulated stock exchanges, swapping millions of shares of each other’s stocks with no oversight and no transparency. But there is zero basis for that trust. These are the same banks being charged, month after month, year after year, with cavalierly engaging in collusion with each other to rig market benchmarks for their own self enrichment and to the extreme detriment of market integrity, small investors and the economy at large.

There are only two ways to look at this: Congress and regulators are preposterously naïve about the level of corruption on Wall Street – or they’re part of the conspiracy. Either way, to restore the public confidence that has permanently left our markets, we need a credible, non conflicted, independent counsel to take charge of the investigations. 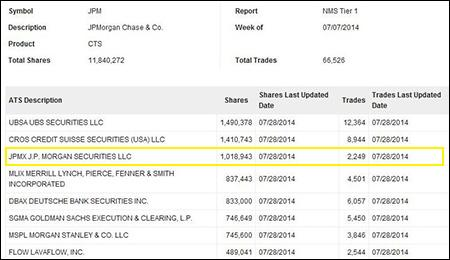