Crushing Occupy Wall Street: It Was All About the Pitchforks 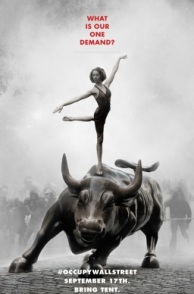 The Poster That Launched Occupy Wall Street, Courtesy of Adbusters

You know there is something different in the air when Rand Paul is railing against “fat cats” and a fat cat is worrying aloud about pitchforks in Politico Magazine.

It all harkens back to one of the greatest grassroots awareness campaigns in history, variously called Occupy Wall Street or “We Are the 99 Percent.” In a messy, tarp-filled outpost in Zuccotti Park in lower Manhattan, the message of enforced inequality via the 99 percent brand was plastered across posters, hand-made t-shirts, street puppets, and even flashed onto skyscrapers in a creative blend of marketing savvy and social activism. From there, it tweeted around the world.

This was creative destruction at its finest: calling out a failed system of crony capitalism that was only working for the 1 percent while creatively protesting for change in the streets – the only method left since the system was metastasizing under the Supreme Court’s 2010 Citizens United decision which opened the spigots to a flood of corporate money in elections.

Capitalists supposedly love creative destruction where failed systems and business models are meant to collapse in order to be replaced with more efficient, innovative ones. But Occupy Wall Street was crushed with the brutality of a wrecking ball and the collaboration of a vast surveillance network.

The Department of Homeland Security funded a high-tech, joint spy center in the heart of Wall Street where the New York Federal Reserve, Goldman Sachs, JPMorgan Chase and other Wall Street mega banks had their own personnel working alongside NYPD officers to spy on the activities of Occupy Wall Street protesters as well as law abiding citizens on the streets.

Thanks to the Freedom of Information Act (FOIA) demands made by the Partnership for Civil Justice Fund (PCJF), we learned that the Department of Homeland Security obsessed over the social media savvy of the protesters and  evaluated daily the media coverage being given to the movement.

Manhattan, of course, has one of the greatest concentrations of the one percent in the world and one of their own, billionaire Michael Bloomberg, was serving as Mayor at the time of the Occupy encampment in Zuccotti Park. The fear of the peaceful movement quickly turning into an exponentially mushrooming mob branding pitchforks was on the minds of the billionaires.

The man now speaking aloud about the pitchfork concern to his self-described fellow “plutocrats” in Politico Magazine is venture capitalist Nick Hanauer, an early investor in Amazon. Hanauer writes:

Hanauer’s missive, which currently has an astonishing 4,786 comments at Politico, was posted at Information Clearing House where one commenter, “Upstream,” threw cold water on the plan to escape to New Zealand, writing: “…they should not be too surprised to be met at the airport here in new Zealand with pitchforks .”

If one were to compile a timeline, it would confirm that the Occupy movement, through much human suffering in outdoor encampments in frigid temperatures, brutal arrests at the hands of a billionaires’ police state, and incessant snark from Fox News, built the foundation for the growing debate about the unprecedented income and wealth inequality in America.

Consider how similar the message of progressive Robert Reich is to the message of billionaire Nick Hanauer. Reich wrote on his blog on February 7, 2014:

“Yet too many still believe in trickle-down economics — that the wealthy are the job creators, and tax cuts for big corporations and the rich will boost the economy. The real job creators are the vast middle class and the poor — when they have enough money in their pockets. That’s the only way out of the vicious cycle we’re now in.”

“Which is why the fundamental law of capitalism must be: If workers have more money, businesses have more customers. Which makes middle-class consumers, not rich businesspeople like us, the true job creators. Which means a thriving middle class is the source of American prosperity, not a consequence of it. The middle class creates us rich people, not the other way around.”

And now, of course, the bestselling book from economist Thomas Piketty, Capital in the Twenty-First Century, with its 200 years of cold, hard data is creating insurmountable problems for the “we built it” crowd and spreading the wealth and income inequality debate around the globe.

Jeffery Haas, in a comment posted under Hanauer’s article at Politico summed up the mood of a great part of America, writing: “Trust me Nick, it’s not that people WANT to bring out the pitchforks. People want to work, but they want to be rewarded for their work. They want to climb that same ladder you climbed. They know that they may not reach the same dizzying heights that you ascended to, but Nick, the general feeling down here is that some of your friends are either furiously sawing the rungs off the ladders or pulling the ladders up altogether once they get over that wall.”

Grab a box of tissues and read the same message of Jeffery Haas with the untidy specifics from our fellow citizens living through this plutocrat nightmare.