Is the Market Crazy? Treasurys Are Screaming Crisis While Stocks Yawn 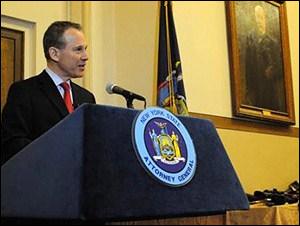 Increasingly, the U.S. bond market is delivering almost the same message as Michael Lewis. The U.S. Treasury market, which is experiencing a flight to safety (that suggests a slowing economy, lower corporate earnings and thus a lower stock market in the future) is essentially saying that the current composite wisdom of the stock market is either nuts or the market is, indeed, rigged.

Strong economies produce a higher demand for money and, thus, rising interest rates. For stocks, which are wedded to earnings, to be rising while Treasury yields are falling shows a serious decoupling of market logic.

The question is, does high frequency trading and stock market rigging have anything to do with this decoupling?

For starters, if some firm or a cartel of firms (and we certainly have plenty of those today) wanted to rig the stock market, their job is a lot easier today than it was pre-crisis. That’s because stock volume is weak in the biggest names.

Joseph Ciolli and Lu Wang of Bloomberg News report today that only “1.8 billion shares traded each day in S&P 500 companies last month, the fewest since 2008.” Equally worrying, say the reporters, is that when the S&P 500 index “hit an all-time high on May 23, only about 20 of its 500 companies reached 52-week highs…”

A market index setting new highs while only 20 of its 500 components set new highs, i.e. less than 5 percent, is sounding the same alarm bell as the bond market. The rising tide is not lifting all boats or to put it in Wall Street parlance, this is decidedly weak breadth.

What could high frequency traders possibly have to do with this?

On September 24 of last year, New York State Attorney General made the following remarks at a Bloomberg Markets summit:

“When I was a kid, everyone wanted to be in the market. I mean, the sign of success was you own your home and you have a portfolio of stocks. Normal average Americans thought that they and their brokers, if they were prudent, had an opportunity to buy low and sell high as the big time Wall Street players did. And the new market manipulators – the new folks that do something that would be unimaginable a decade ago – they refer to those average Americans as the dumb money. And ladies and gentlemen, a lot of us here may very well be a part of that dumb money because if you don’t have access to a supercomputer capable of flipping tens of thousands of shares in milliseconds, and access to market moving information a little bit ahead of everyone else, you may be in the dumb money, even if you think you’re an insider who thinks they have an edge.”

So here you have the highest law enforcement official in New York State, who spent much of his private law career working on behalf of Wall Street clients, telling you that you, and even he, is perceived as the “dumb money” by high frequency traders.

On April 2, Michael Lewis appeared on Bloomberg Television and elaborated further on today’s “dumb money” in the stock market, equating legendary hedge fund investor, David Einhorn, to be the equivalent of a “dumb tourist.” Lewis gave this further analogy:

“So I have a casino and I want to start a poker game in the casino. So I get three card sharks and I tell them: ‘go sit there and start the game; make it look like a good game’s going on. There are no 4s, 9s, there are no queens in the deck. Only you will know that. And we will pay some tour group operators to bring like a bunch of dumb tourists in to play with you’… So, of course, the tourists get fleeced all the time in the poker games, because they don’t know the deck is rigged. The poker players pay the casino a cut of what they make. The casinos’ operators pay the tour group — the tour group company money to bring in the tourists. So in this case, casino’s the exchange, the poker players are the high-frequency traders, and the tour group operators are the banks and the brokers that handle the stock market orders. And I think the analogy is pretty close. So is that rigged? Is that a rigged game? I think it is a rigged game.”

So here’s the point: high frequency traders can only keep this rigged game going if the dumb money continues to pour in to the stock market on the perception that we’re in a bull market. The bond market – way too big to rig – is telling you the bull is sucking his last few breaths. (Or breadths.)