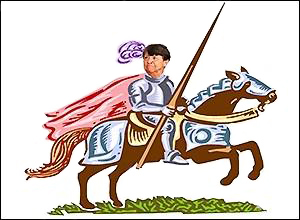 SEC Chair Mary Jo White’s untenable position that “markets are not rigged” is bringing unwelcome attention to the SEC’s dismal record on ensuring that stock exchanges operating in the U.S. are fair.

Since bestselling author, Michael Lewis, went on 60 Minutes on March 30 to detail, step by step, how the stock market is rigged – there has been a slow, but steady, realization that the woman President Obama sold to the American people as the white knight who would rein in abuses on Wall Street has failed miserably in that role.

Under the Securities Exchange Act of 1934, codified at 15 U.S. Code § 78f, the Securities and Exchange Commission is statutorily mandated to ensure that the rules of the stock exchanges are designed “to prevent fraudulent and manipulative acts and practices, to promote just and equitable principles of trade…to remove impediments to and perfect the mechanism of a free and open market and a national market system, and, in general, to protect investors and the public interest; …”

In addition, the legislation requires that the exchanges’ rules cannot “permit unfair discrimination between customers, issuers, brokers, or dealers…”

Despite that very precise and clear language mandating a “free and open market” devoid of “discrimination between customers,” the SEC has not just sat idly by and watched the stock exchanges rig the market, it has played an involved and instrumental role in the process.

With the imprimatur of the SEC, the New York Stock Exchange and Nasdaq are selling the right to high frequency traders to co-locate their high speed computers next to the exchanges’ own computers so high frequency traders can get an early peek at order flow and jump in front of slower traders. In addition, the big broker dealers on Wall Street are no longer required to subject their stock orders coming from the public to sunshine; they simply match up the buy and sell orders inside their own firms in what are called “dark pools.” These are, effectively, unregulated stock exchanges operating in darkness.

In this Google cache of a promotional piece aimed at high frequency traders, the New York Stock Exchange boasts that it is offering a “fully managed co-location space next to NYSE Euronext’s US trading engines in the new state-of-the-art data center.” The NYSE says it is for “High frequency and proprietary trading firms, hedge funds and others who need high-speed market access for a competitive edge.”

Despite the clear language of the Securities Exchange Act of 1934 which bars the “unfair discrimination between customers, issuers, brokers, or dealers…” we have the most iconic stock exchange in America openly boasting that it will give a “competitive edge” to high frequency traders. There is no better example than this promotional piece to show how greed has overtaken rational thought on Wall Street.

Not only are the New York Stock Exchange and Nasdaq allowing high frequency traders to co-locate their computers next to the main computers of the exchanges to gain a speed advantage over other customers at a monthly cost that only the rich can afford, but they’re now tacking on infrastructure charges that price everyone out of efficient use of the exchanges except the very top tier of trading firms. This filing by the SEC in the Federal Register proves that the SEC is not only aware of the practice but has thoroughly embraced it.

Lewis writes in his latest bestseller, Flash Boys, that “both Nasdaq and the New York Stock Exchange announced that they had widened the pipe that carried information between the HFT [high frequency trading] computers and each exchange’s matching engine. The price for the new pipe was $40,000 a month, up from the $25,000 a month the HFT firms had been paying for the old, smaller pipe.”

All of this has the media steaming. On May 4, Alec MacGillis penned a scathing critique of White in the New Republic. Columbia law professor, Rob Jackson, is quoted as follows in the article:

“Tell me one thing that [White’s] board has done that’s investor friendly—I can’t think of one…It’s astonishing. And the reason it’s been missed is that she’s established this notion that she’s going to be the top cop on the beat. That disguises the fact that she’s the most investor-unfriendly chair in two decades.”

More troubling, on May 22, Leah McGrath Goodman wrote in Newsweek that the magazine had learned that “since the New York state attorney general in recent weeks started subpoenaing trading firms, banks and exchanges across Wall Street, the SEC has refused to take a cooperative tack in its investigations.”

Goodman goes on to explain that ordinary investors without the money to pay the obscene fees being charged by the exchanges are receiving stale prices that lag by “about 15 to 20 minutes.”

“If you have the money, you can see up-to-date prices. If you don’t, you cannot. Knowing the difference, of course, means those with access to real-time prices and other information can see where the market is heading before everyone else—and profit handsomely off that insight. In the meantime, investors relegated to the ‘current’ prices available on websites like YahooFinance are actually receiving prices that are old.”

As clear-cut as the law is, those benefitting from these abusive practices are more than willing to appear on CNBC or Bloomberg News and tortuously rationalize why all of this is just good ole capitalism at work.

A particularly noteworthy performance took place on May 29 when Kevin McPartland, a principal at Greenwich Associates who actually specializes in Market Structure and Technology, with a BS in Computer Science from Rensselaer Polytechnic Institute, had this to say: 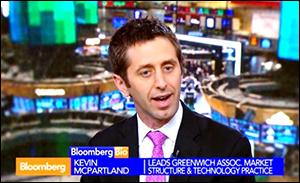 Kevin McPartland of Greenwich Associates, Their Technology Guru, Thinks Retail Investors Are Getting Stock Prices at the Same Time as Everyone Else

McPartland: “We’re safer today in the markets – retail and institutional investors are safer today in the markets than they’ve ever been. If you think back to the 80s and we had the floor of the exchange, sort of the good ole fashioned way, spreads were much, much wider, there was a much larger information difference between what the retail guy was seeing and what the guys on the floor were seeing. Today, we’re all on line, we’ve all got real time data to our desk tops; you know what the price of the stock is to the penny.”

Later in the program McPartland adds: “I really don’t like the use of the word fair when we talk about capital markets – really about the industry in general. It’s not about it being fair, right, it is capitalism, right. So as long as we’re all following the rules and we know what the rules are, everybody’s in the business to [interrupted]”  You can watch the full exchange here.

New York State Attorney General Eric Schneiderman delivered an address to the New York Law School on March 18 of this year and said that these co-location practices at the exchanges are currently one of the areas his office is looking at. Schneiderman noted that Mary Jo White was in the audience and, on multiple occasions, he appeared to be lecturing her that she hadn’t taken this matter seriously enough or done enough to stop it.

“We know that high-frequency traders are uniquely able to take advantage of co-location, but there are other services also offered…They [exchanges] supply extra bandwidth, special high-speed switches and ultra-fast connection cables to high-frequency traders, so they can get, and receive, information at the exchanges’ data centers even faster.  These valuable advantages, once again, give them a leg up on the rest of the market.”

Since folks like White and McPartland can’t seem to grasp the idea or the law that requires exchanges to function “to protect investors and the public interest,” to be free of “discrimination,” and devoid of “impediments” to a “free and open” market, Wall Street On Parade has found an analogy that might help remedy their potential for cognitive dissonance as the media gains a better understanding of the core issues.

A Pinewood Derby is an event held by Cub Scouts around the United States. Its rules are fascinatingly comparable to the conceptual underpinning of the law under which stock exchanges are required to function to create a level playing field for all comers.

Cub Scouts take a little chunk of wood and carve out a race car. But the rules are very strict to make sure everyone comes to the start of the race with no advantage other than their own creativity and hard work on the project.

We found a typical set of rules for a Pinewood Derby here. Stock exchanges selling super perks and high frequency traders buying multi-million dollar state of the art computers and hiring Ph.D.s to design artificial intelligence trading algorithms might want to pay close attention to what they have apparently forgotten from childhood. The SEC may find it useful to be reminded about what the role of “inspection” is.

Excerpted from the Pinewood Derby rules:

Cars may not be sent to third party facilities for tuning or other performance enhancements.

B. Length – Not to exceed 7 inches

D. Height – Not to exceed 3 inches

Each car must pass inspection by the Official Inspection Committee before it may compete. The Inspectors will disqualify any car not meeting these rules.

Cars may be reclassified or disqualified if they are determined by the race officials to not meet these requirements.

Good Sportsmanship and Behavior is Expected: Race Officials may ask anyone not following this rule to leave.