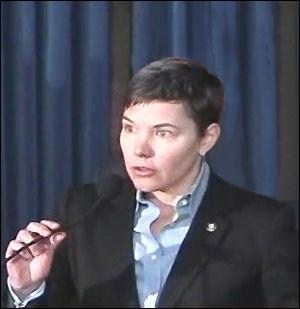 Jennifer Shasky Calvery, Director of FinCEN, Speaking at a Press Conference to Announce Federal Charges Against JPMorgan for its Role in the Madoff Ponzi Scheme

According to a Freedom of Information Act response received by Wall Street On Parade, Federal law enforcement may share the blame with JPMorgan Chase for allowing Bernard Madoff’s Ponzi scheme to be perpetuated for so long.

On January 7 of this year in a press conference called to announce felony charges against JPMorgan Chase for its role in the Madoff Ponzi scheme, U.S. Attorney Preet Bharara, FBI Assistant Director-in-Charge George Venizelos, and the Director of the Financial Crimes Enforcement Network, Jennifer Shasky Calvery, took turns at the podium excoriating JPMorgan for observing brazen, long-term money laundering activity occurring under its nose in the business bank account it held for Bernard Madoff while ignoring its legally mandated duty to file a Suspicious Activity Report (SAR) with the federal government.

The Financial Crimes Enforcement Network, known throughout Wall Street and the banking world as FinCEN, is a bureau of the U.S. Treasury Department that receives the SARs and is tasked with making sure the reports are seriously investigated.

JPMorgan Chase and its predecessor banks, Chase Manhattan and Chemical, oversaw Madoff’s primary business account for more than 20 years. During that time, flagrant money laundering signs should have set off automated bells, whistles and sirens inside the banks and triggered repeated SARs to FinCEN. None were filed by JPMorgan or its predecessor banks according to U.S. law enforcement until after Madoff turned himself in.

The brazenness of the activity was captured in a 2011 court complaint filed against JPMorgan by Irving Picard, the trustee of the Madoff victims’ fund. Picard told the court that “during 2002, Madoff initiated outgoing transactions to [Norman F.] Levy in the precise amount of $986,301 hundreds of times — 318 separate times, to be exact. These highly unusual transactions often occurred multiple times on a single day. As another example, from December 2001 to March 2003, the total monthly dollar amounts coming into the 703 Account from Levy were almost always equal to the total monthly dollar amounts going out of the 703 Account to Levy. There was no clear economic purpose for such repetitive transactions that had no net impact on Levy’s account at BLMIS [Bernard L. Madoff Investment Securities]. There was a huge spike in activity between Levy and the 703 Account in December 2001. In that month alone, Madoff engaged in approximately $6.8 billion worth of transactions with Levy…” (The term “703 Account” refers to Madoff’s primary business account at JPMorgan Chase which ended in the numbers “703.”)

Making JPMorgan’s failure to report even worse in U.S. law enforcement eyes was the fact that it did file a report of suspicious activity by Madoff with the United Kingdom’s Serious Organized Crime Agency (SOCA) on October 28, 2008 but failed to file the same report with U.S. authorities.

FinCEN’s Jennifer Shasky Calvery was particularly harsh in her assessment of JPMorgan’s failure to file a SAR at the press conference on January 7, where JPMorgan was charged with two felony counts, given a deferred prosecution agreement that puts the bank on probation for two years, and a $1.7 billion fine payable to the U.S. Department of Justice that will be distributed to Madoff’s victims. (Including the payment to the Justice Department and other Federal regulators and civil litigants, JPMorgan paid a total of $2.6 billion in the Madoff matter.)

Calvery said: “…it’s about lost opportunities and the catastrophic consequences that can flow. When JPMorgan failed to file a SAR with FinCEN, an opportunity to stop this fraud was missed. JPMorgan’s concerns about potential fraud went unheard, leaving law enforcement and regulators in the dark.”

Calvery is no Johnny come lately. She has served as Director of FinCEN since September 23, 2012. Prior to that she had a 15-year career at the U.S. Department of Justice where her focus was on money laundering and organized crime.

The takeaway from this press conference was clearly that the biggest crime committed by JPMorgan was its failure to file the SAR, thus aiding the “catastrophic consequences” that continued against Madoff’s victims. But what if another bank had filed a SAR in the matter with FinCEN and Federal law enforcement did nothing. What if Federal law enforcement or FinCEN is equally responsible for the “catastrophic consequences” that have destroyed the lives of Madoff victims throughout the U.S. and around the globe?

Within the documents filed against JPMorgan on January 7 by the U.S. Attorney’s Office for the Southern District of New York, we learn that in the 1990s another bank where Madoff held an account observed these round-trip transactions between Madoff and Levy and filed a SAR with FinCEN.  According to the U.S. Attorney’s documents, Madoff was writing checks from an account at “Madoff Bank 2” – a bank other than JPMorgan – to Levy, a mutual customer of both Madoff’s firm and JPMorgan. Later the same day, Madoff would transfer money from his primary business account at JPMorgan to his account at Madoff Bank 2 to cover the earlier check. In the final leg of the transaction, Levy would transfer funds from his own JPMorgan Chase account to Madoff’s primary business account at JPMorgan in an amount sufficient to cover Madoff’s original check to him.

Levy is not mentioned by name in these documents but it’s clear from Picard’s earlier filing that the client involved is Levy. The documents also mention in a footnote that this client died in September 2005, the date of Levy’s death at age 93. Levy was a Manhattan real estate broker and one of Madoff’s largest and oldest clients.

According to the documents, Bank 2 investigated these round-trip transactions, met with Madoff employees, and concluded there was “no legitimate business purpose for these transactions, which appeared to be a ‘check kiting’ scheme.” Bank 2 terminated its relationship with Madoff Securities and filed its SAR with FinCEN, along with details about the facilitating actions of Levy and JPMorgan Chase’s predecessor bank, Chase Manhattan.

If the SAR was filed in the 90s, Wall Street On Parade wondered why a Federal investigation had not exposed Madoff at that time when the funds he ultimately stole from investors would have been significantly less. We filed a Freedom of Information Act request with FinCEN. A stunning response came back on January 20 of this year: there are no documents suggesting an investigation ever resulted from the 1990s SAR. (See FinCEN Response to FOIA from Wall Street On Parade in JPMorgan-Madoff Matter.)

Amanda Michanczyk, a Disclosure Officer at FinCEN wrote: “…we conducted a thorough search of our investigative and enforcement records for the time period estimated in your request using search terms you provided and can find no documents responsive to your request.”

This is what is called the “Wow Factor.” The Feds slap a $1.7 billion penalty on a bank, file a two-felony count indictment against it, put it on probation for two years – all for not filing a Suspicious Activity Report and yet when a bank did file a Suspicious Activity Report no documents exist to show there was ever an investigation. Welcome to the Orwellian juncture of high finance and Federal regulators. We are left to ponder if the investigative documents have been shredded, stolen, or no investigation ever occurred.

Last week, David Rosenfeld of the law firm Robbins Geller Rudman & Dowd LLP filed a lawsuit on behalf of the Central Laborers’ Pension Fund and Steamfitters Local 449 Pension Fund against 13 current and former executives of JPMorgan and its Board of Directors, including Chairman and CEO Jamie Dimon. The lawsuit charges these individuals with “recklessly permitting the Company to facilitate and perpetuate Madoff’s massive Ponzi scheme in the face of repeated and glaring warnings signs, and willfully failing to establish an adequate AML [anti-money-laundering] program.”

The lawsuit calls attention to what the Justice Department did not tell the public when it settled the case against JPMorgan: “The Statement of Facts depict a bank with unparalleled insight into Madoff’s fraud.  However, the extent to which JPMorgan’s actual knowledge of or willful blindness to Madoff’s fraud reached the highest echelon of the Bank is not disclosed in the Deferred Prosecution Agreement, nor anywhere else in the public record.”

Anyone who has ever worked as a relationship manager or a stock broker at a major Wall Street bank knows that there is only one way that flagrant signs of money laundering are ignored over decades. Someone in a position of power had to shut down the automated warning system on this account and/or quash any internal investigations.

The fact that when FinCEN received a SAR from another major bank it still did not investigate or someone has erased the details of that investigation raises the additional alarm that someone in a position of power may have influenced that investigation inappropriately.

The Justice Department’s role in potentially preventing a full public accounting of the Madoff fraud was further called into question in December when news broke that the Justice Department had killed a subpoena request for internal JPMorgan documents related to the Madoff fraud that had been made by its primary bank regulator, the Office of the Comptroller of the Currency and supported by a second demand from the Inspector General of the U.S. Treasury.

Why the Justice Department would block regulators from obtaining critical documents, why FinCEN has no documents pertaining to the 1990s SAR filing, why brazen round-trip money laundering was allowed to continue at a major Wall Street bank are all issues waiting for transparent answers.