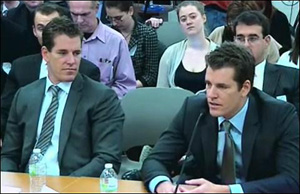 Cameron (left) and Tyler Winklevoss Testifying at a Virtual Currency Hearing on January 28, 2014

Mark Karpeles, a 28-year old Frenchman and the head of the now shuttered Bitcoin web site Mt. Gox, where customers are said to have lost hundreds of millions of dollars, may be a very talented software developer and entrepreneur, but what he clearly is not is a competent banker; and yet, he was allowed to accept large quantities of deposits of money from the public.

Mt. Gox, a purveyor of the virtual currency, Bitcoin, held no banking license or bank charter in the U.S. It had no FDIC insurance guaranteeing the deposits. There were no bank examiners periodically checking the books to be certain the deposits were safe. And yet, according to the chart below from Alexa, it may be U.S. citizens who suffered the largest losses.

Alexa ranks sites by traffic from around the globe. Despite the fact that Karpeles was based in Tokyo, the largest percentage of his traffic was coming from the United States.

Concerns about virtual currencies such as Bitcoin have grown by U.S. regulators since October of last year when the U.S. Department of Justice shut down an outfit called Silk Road which was involved in both Bitcoins and an effort at murder-for- hire. Mythili Raman, Acting Assistant Attorney General of the Criminal Division of the Justice Department, testified as follows on November 18 of last year to the U.S. Senate Committee on Homeland Security and Governmental Affairs:

“…the Department took action against one of the most popular online black markets, Silk Road.  Allegedly operated by a U.S. citizen living in California at the time of his arrest, Silk Road accepted Bitcoins exclusively as a payment mechanism on its site.  The Department’s complaint alleges that, in less than three years, Silk Road served as a venue for over 100,000 buyers to purchase hundreds of kilograms of illegal drugs and other illicit goods from several thousand drug dealers and other criminal vendors.  The site also purportedly laundered the proceeds of these transactions, amounting to hundreds of millions of dollars in Bitcoins.  In addition to arresting the site’s operator and shutting down the service, the Department to date has seized over 170 thousand Bitcoins, valued as of this past Friday, November 15, 2013, at over $70 million. A separate indictment charges Silk Road’s operator with drug distribution conspiracy, attempted witness murder, and using interstate commerce facilities in the commission of murder-for-hire.  With regard to the murder-related charges, the indictment alleges that the Silk Road operator paid an undercover federal agent to murder one of the operator’s employees.”

Another hearing was held as recently as January 28 and 29 by Benjamin Lawsky, Superintendent of the New York State Department of Financial Services (NYSDFS). During the hearing, Maria Filipakis, the Executive Deputy Superintendent for Capital Markets at NYSDFS, disclosed that 50 percent of all Bitcoins are in the hands of less than 1,000 owners. This elicited a discussion of whether the virtual currency is really about expanding shopping over the internet or simply being hoarded by venture capitalists who hope to reap speculative profits as the Bitcoin price soars.

Cameron and Tyler Winklevoss, the twins who sued and lucratively settled a case against Facebook founder Mark Zuckerberg, claiming he stole their ideas to create a social networking site, were present at the Lawsky hearing. The brothers explained that they hope to launch a Winklevoss Bitcoin Trust, an exchange traded fund, at some point in the future.

According to the most recent Winklevoss Bitcoin Trust filing at the SEC this month, there is a lack of acceptance of Bitcoins by retail merchants. This statement appears to stand in stark contrast to a bold pronouncement on the Bitcoin site, Coinbase, which asserts that “25,000 businesses trust Coinbase to accept Bitcoin payments.”

“As relatively new products and technologies, bitcoins and the Bitcoin Network have not been widely adopted as a means of payment for goods and services by many major retail and commercial outlets. Conversely, a significant portion of bitcoin demand is generated by speculators and investors seeking to profit from the short — or long-term holding of bitcoins. The relative lack of acceptance of bitcoins in the retail and commercial marketplace limits the ability of end-users to pay for goods and services with bitcoins.  A lack of expansion by bitcoins into retail and commercial markets, or a contraction of such use, may result in increased volatility or a reduction in the Winkdex spot price, either of which could adversely impact an investment in the Shares.”

An insight into the drive in the U.S. to foster innovation, start ups and boost IPO issuance, even when it means putting consumers at serious risk of being defrauded, is captured in this video of the new-age Bitcoin banker, Mark Karpeles, who demonstrates how to make an apple pie from scratch. Take note that there is no measuring cup or measuring spoons involved in making the dough. It’s all done by the seat of the pants. 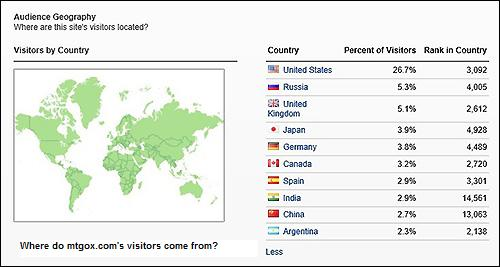