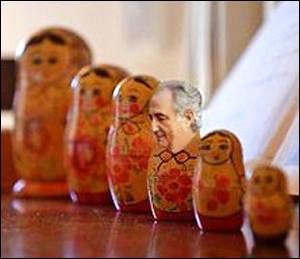 Last week JPMorgan Chase paid $2.6 billion in fines and restitution, signed a deferred prosecution agreement and walked away from their 22-year involvement with Bernie Madoff’s Ponzi scheme. But according to court documents filed in 2011 by the Trustee of the Madoff victims’ fund, Irving Picard, this was not a simple case of poor risk management at JPMorgan. This was an operation structured like those Russian nesting dolls, with the Ponzi scheme as the outside doll with many more frauds layered inside the big one.

After reading the documents released by the Justice Department in connection with the settlement, the Los Angeles Times asked in a photo caption of a smirking Madoff outside of Federal Court: “Bernie Madoff: Was he part of the JPMorgan ring, or was JPMorgan part of his ring?”

The New York Times had a far more charitable stance, with Floyd Norris writing: “Did JPMorgan Chase deliberately cover up Bernard L. Madoff’s fraud? The documents released this week by federal prosecutors do not show it did, and I suspect it did not.”

Interestingly, the folks in sunny California, 2400 miles away from Wall Street, had an epiphanous moment in that photo caption while the Times assumed an all too common ostrich position when it comes to Wall Street.

According to the Securities Investor Protection Corporation (SIPC), the Justice Department prosecutors who settled the case against JPMorgan Chase used the investigative material from Picard to bring their charges and settle the case. Those court filings show layers upon layers of frauds within the Ponzi scheme.

Clearly, this is fraud number two on the part of someone – loan fraud.

Fraud number three occurred when JPMorgan Chase and its predecessor banks extended tens of millions of dollars in loans to Norman F. Levy and his family so they could invest with the insolvent Madoff. (Levy died in 2005 at age 93 without being charged with any crimes. Levy’s accountant, Paul J. Konigsberg, was indicted in September of last year and charged by the Securities and Exchange Commission in a civil action. Konigsberg has pleaded not guilty in both cases.)

According to Picard, Levy had $188 million in outstanding loans in 1996, which he used to funnel money into Madoff investments. Picard’s lawyers told the court that JPMorgan Chase (JPMC) “referred to these investments as ‘special deals.’ Indeed, these deals were special for all involved: (a) Levy enjoyed Madoff’s inflated return rates of up to 40% on the money he invested with Madoff; (b) Madoff enjoyed the benefits of large amounts of cash to perpetuate his fraud without being subject to JPMC’s due diligence processes; and (c) JPMC earned fees on the loan amounts and watched the ‘special deals’ from afar, escaping responsibility for any due diligence on Madoff’s operation.”

A critical piece of evidence against JPMorgan was that despite funneling loans to both Madoff and Levy, the bank “advised the rest of its Private Bank customers not to invest with Madoff,” according to Picard.

On paper, according to Picard, Levy was worth $1.5 billion in 1998. He was such an important customer to JPMorgan and its predecessor firms that he was given his own office at the bank – a situation that perhaps fueled the Los Angeles Times’ question of just who was a part of whose gang.

Levy was a commercial real estate broker and, according to an article by Mark Seal in the April 2009 issue of Vanity Fair, at one point Levy “had an ownership stake in 70 properties, including the Seagram Building and 21 shopping centers across America…” There is some basis for suspicion that inflated and fraudulent account statements provided by either JPMorgan Chase and/or Madoff may have been used to obtain real estate loans. If so, that would constitute yet another fraud.

According to Picard, Levy’s relationship with JPMorgan’s predecessor banks predated his relationship with Madoff by 31 years. Once Levy was a Madoff client, the relationship included classic, unchecked evidence of money laundering for years and years that should have resulted in legally-mandated Suspicious Activity Reports (SARs) filed with the U.S. Treasury Department’s Financial Crimes Enforcement Network (FinCEN). Even after another bank detected the activity in the late 90s and reported the transactions to FinCEN, JPMorgan Chase and its predecessor banks failed to file their own mandated SARs and not only allowed the activity to continue but allowed it to increase dramatically in dollar terms.

Having worked on Wall Street myself for 21 years, I can assure you that just one atypical transfer of a large sum of money between accounts will elicit a serious investigation by an honest  Wall Street firm’s compliance department. It will drill down until it gets proof that the transfer had a legitimate basis.

What was happening in Madoff’s account was so over the top that it is virtually impossible to reconcile it with a legitimate compliance department unless some higher up simply shut down the normal bank controls. Picard told the court that “during 2002, Madoff initiated outgoing transactions to Levy in the precise amount of $986,301 hundreds of times — 318 separate times, to be exact. These highly unusual transactions often occurred multiple times on a single day.”

Levy’s accountant, Konigsberg, is charged with routinely telling a Madoff employee to regenerate statements for the clients referred to him by Madoff, dictating the terms of what kind of profits and losses he wanted to see on the statements each year.

The SEC says in its complaint that Konigsberg “was compensated for his work in connection with these BMIS [Bernard Madoff Investment Securities] clients. He received fees directly for the accounting services that he provided to these clients, and additionally, BMIS and Bernard Madoff (Madoff) compensated Konigsberg with a monthly fee of $15,000 or $20,000 as a ‘retainer’ for providing accounting services to a wealthy and longtime Madoff client and his adult children.”  The SEC cites one example where “Konigsberg instructed Employee X that his client was to experience no more than $18 million in losses. In giving these instructions, Konigsberg understood that Employee X and BMIS would create unlawful, backdated trades to benefit his clients.”

And here we have, at least, frauds number four and five. Tax fraud and the fraudulent creation of broker-dealer records. And we’ve barely scratched the surface thus far.

Like we said, think Matryoshka, the Russian Nesting Dolls’ frauds within frauds.