On any given business day, you can take a taxi ride into lower Manhattan in the wee hours of the morning and see lights and the glow of Bloomberg trading terminals eerily illuminating the 9th floor of the historic Federal Reserve Bank of New York at 33 Liberty Street.

A securities trader working at 4:30 a.m. in any other trading location in Manhattan might be concerned about personal safety. Not here. Quietly, without Congressional hearings, and lost in the tragedy and turmoil of September 11, the USA Patriot Act in 2001 bestowed private domestic policing powers on the 12 Federal Reserve Banks, including the New York Fed.

On top of its own police force armed with Glock 22s and assault weapons, the building itself is a 22-story fortress with 18 floors above ground and four below. The building, completed in 1924, constitutes the block bounded by Maiden Lane, Nassau, Liberty and Williams Streets. The principal architect, Philip Sawyer, was influenced in his design by the Florentine palaces he observed while studying in Italy. The New York Fed’s unique façade of large rectangular blocks of limestone and sandstone ashlar with imposing arched windows and ironwork resembles the Strozzi Palazzo in Florence. 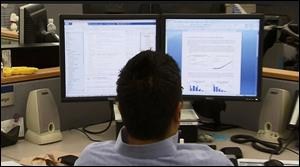 There is also the comfort of knowing that if this fortress is safe enough for one of the world’s largest stashes of gold, it’s likely safe enough for groggy traders. The triple-tiered gold vault rests on a bedrock foundation deep below the building, which not only supports the gold but a 90-ton vault door and 140-ton door frame. The building was built around the gold vault after it was installed.

Karin Kimbrough, the Director of Financial Stability Market Monitoring at the New York Fed, has participated in an educational video to explain what goes on all day in that trading room. According to Kimbrough, the traders take turns coming in at 4:30 a.m. to get a jump on market intelligence by calling their contacts in London, Frankfurt and Japan. Market intelligence is now a top priority for the Markets Group which oversees the trading function at the New York Fed – the only one of the 12 regional Federal Reserve banks to have its own trading floor.

Kimbrough explains what the traders and analysts are looking for in the way of anomalies in markets: “…if there was a fundamental reason to see German Bund yields rising, what would be the consistent view across all asset prices. Are we seeing something similar in other sovereign bond markets? Are we seeing something moving in equity markets? Typically, we also try to think a little bit about the context of these moves. Are they large moves; are they moves that we see daily and really something that we’re expecting every morning or every season.”

Monitoring equity markets is not something that was heretofore understood to be the purview of the New York Fed or the Federal Reserve System, which functions as the central bank of the United States and is tasked with carrying out monetary policy. But as we reported last week, for some inexplicable reason, the New York Fed now has its own equity analyst team looking at the stock performance of the biggest banks. (That gives a whole new level of meaning to mission creep.)

According to a 1997 report by Michael Akbar Akhtar, then a Vice President of the New York Fed, the Markets Group was previously teleconferencing just once a day with the Federal Reserve Board of Governors’ offices in Washington, D.C. Today, a second teleconference has been added in the afternoon, suggesting that the 2008 Wall Street crash created a heightened sense of need for global intelligence gathering.

Kimbrough says that after the early morning intel phone calls, the traders and analysts meet “around 8 in the morning to have a discussion with the entire desk, which can be as much as 60 people, to talk about what we’re seeing and think about what are the right questions to investigate over the day.” At 9:30 a.m., the intelligence is formally presented to the Board of Governors in a teleconference. 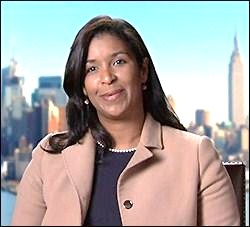 Karin Kimbrough of the Federal Reserve Bank of New York

Wall Street On Parade asked the New York Fed who might be on that morning call. They have yet to get back to us. According to the Akhtar report, “the call links the Manager [today that is Simon Potter] and other New York staff with the Director of the Division of Monetary Affairs [currently William English] and other staff members at the Board, and with one of the four Reserve Bank Presidents outside of New York currently voting on the FOMC [Federal Open Market Committee]. The call, which usually lasts about 15 minutes, offers the Desk’s review of reserve conditions and financial market developments, and the Manager’s plan for open market operations…The financial market review includes price and rate movements in the U.S. Government securities markets and the main influences on market movements. Mention is made of the effects of any data releases and other events on activity in the securities markets. Desk staff members describe the situation in the federal funds market, providing the latest information on rates and on the reserve needs and the funding activity of major banks. They also note key developments in the foreign exchange markets.”

According to Akhtar, a summary of this conference call is put together by the staff of the Board of Governors and is delivered to each Board member shortly after the call ends and is immediately transmitted to each Federal Reserve Bank President.

It is understood that a large source of the intelligence being collected today is coming from phone calls made by the Markets Group to the Primary Dealers (the biggest Wall Street firms) with whom the New York Fed conducts its open market operations. According to multiple sources, the New York Fed has direct phone lines to its Primary Dealers. What is not routinely known on Wall Street is that, according to Akhtar, the New York Fed’s traders, at the time of his report, were officially tasked with visiting “market participants and dealers at their offices in New York City to learn about markets and dealer operations; these visits frequently take place in the afternoons.”

Given that a large chunk of the New York Fed’s staff ends up with high-paying jobs at these Wall Street firms, this hobnobbing in the afternoon raises a host of red flags, not the least of which is the potential for front-running (trading ahead of the customer) and leaking a competitor’s  information.

We do not know if that afternoon hobnobbing by the Markets Group is still going on, but plenty of other hobnobbing of a questionable nature is – considering that the New York Fed is also a key regulator and examiner of these Wall Street banks.

Kimbrough explains that the Markets Group gathers together again at noon to prep for their afternoon conference call with the Board of Governors’ staff. “So, throughout the day,” adds Kimbrough, “we’re essentially doing a lot of market monitoring for these twice a day conference calls with the Board. In addition to that, we’re writing reports throughout the day as well. We have staff who are either writing short-term updates on what’s going on in the equity markets or corporate bond markets. And we’re looking to see if we have any inclination of what market participants are expecting; because market expectations are hugely important for the Fed in thinking about the course of the economy.”

The day for the traders and analysts wraps up around 6 to 6:30 p.m. Kimbrough says that it’s a long day because they “try to cover the closing of Japan as well as the middle point of Europe all the way through the U.S. session.”

Andrew Huszar is a senior fellow at Rutgers Business School and a former Morgan Stanley managing director. Huszar wrote in an opinion piece in the Wall Street Journal in November that he had “…left the Fed out of frustration, having witnessed the institution deferring more and more to Wall Street. Independence is at the heart of any central bank’s credibility, and I had come to believe that the Fed’s independence was eroding.”

Huszar continues: “In the past, Fed leaders — even if they ultimately erred — would have worried obsessively about the costs versus the benefits of any major initiative. Now the only obsession seemed to be with the newest survey of financial-market expectations or the latest in-person feedback from Wall Street’s leading bankers and hedge-fund managers. Sorry, U.S. taxpayer.”

Huszar is not alone. In a Neil Irwin article in 2009 in the Washington Post, economist Simon Johnson is quoted as worrying that the New York Fed “pays too much deference to the expertise and presumed wisdom of a sector that screwed up massively.”  The article goes on to note that “experts worry that the New York Fed has adopted the mindset of a trading floor: well attuned to ripples in financial markets but not to long-term trends and dangers.”

What the New York Fed is doing in its daily routine is the strongest proof yet that we have lost any semblance of fair and efficient markets. The stock and bond markets are supposed to exhibit, through their price action, the sum total of knowledge of all market participants. The price action is supposed to be there, minute by minute, second by second, for all market players to observe on a level playing field.

Certainly, the average American investor does not have a direct phone line to Wall Street traders to pick their brains for behind-the-scenes intelligence. If the price action of the individual securities or sectors is no longer adequate to discern what is happening in the market, why should the little investor participate?

The New York Fed is obviously battle-scarred from the 2008 crash and attempting to comfort itself through increased intelligence efforts. The irony is that its intelligence is coming from the very Wall Street firms that have lobbied Congress to build this opaque and inefficient marketplace.

All of these efforts at super-sleuthing (which are destined to fail because of the source of the intelligence) would be unnecessary if the trillions of dollars of derivatives now traded in the dark were moved onto transparent exchanges; if Wall Street firms were forced to stop internalizing their order flow and subject buy and sell orders to the light of day; if traders from across multiple firms were prohibited from colluding in chat rooms on Bloomberg terminals; and if Wall Street’s private justice system, which ushers customer complaints and compliance issues into the darkness of mandatory arbitration hotel rooms, was restored to the disinfecting sunlight of our Nation’s courts and an inquiring press.

I hate to be the one to tell those early risers at the New York Fed, but this is a game of folly that will not end well for any of us.