Can Citigroup Polish Its Tarnished Halo With Free Labor Cyclists? 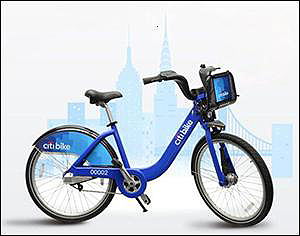 Citigroup, parent of the once walking-dead of commercial banks, Citibank, is attempting to shed its image of Dr. Evil trades, bank bailouts, and student loan horrors through a high-risk outdoor advertising campaign in New York City.

Called Citi Bike, the campaign is the brainchild of advertising giant Publicis Kaplan Thaler. Publicis explains the idea this way: “A bike sharing system consists of a fleet of specially designed, sturdy, very durable bikes that are locked into a network of docking stations sited at regular intervals around a city. The bikes can be rented from and then returned to any station in the system, creating an efficient network with many possible points and combinations of departure and arrival. With thousands of bikes at hundreds of stations, Citi Bike will be available for use 24 hours a day, all year ’round.”

What does Citibank get out of this? Its logo is emblazoned all over the bikes; it ostensibly gets kudos for a Green effort; and cyclists are effectively free labor – moving the Citibank brand all over Manhattan 24/7 as they take their life in their hands going up against wild motorists.

Citibank has likely shielded itself from liability. An unrelated private company, NYC Bike Share LLC, a subsidiary of Alta Bicycle Share, operates the program. (For the unschooled, LLC stands for limited liability corporation.)

The campaign rolled out in May and there are already at least four lawsuits at various stages in the courts. The residents and community groups that are suing view the clunky docking stations placed in front of their apartment buildings or community parks as an aesthetic blight and a usurpation of the public’s right to have a say over land use decisions. According to Julia Marsh and Rebecca Harshbarger of the New York Post, citing a report from the New York City Department of Transportation, a whopping 45 percent of the Citi Bike locations were moved after complaints by residents.

The bike campaign has a youthful ring to it and Citibank needs all the help it can get propping up its image with young people. Citigroup/Citibank is one of the Wall Street banks frequently targeted by Occupy Wall Street.

The rollout of the bike program came just a few months after the Consumer Financial Protection Bureau (CFPB) solicited and began receiving hair-raising written reports of student loan experiences by Citibank customers. (Complaints were made against other student loan lenders as well.)

Allison L. from Rego Park, Florida wrote to the CFPB about her Citibank experience as follows:

Diane A. told the CFPB that: “I have been paying them $172 a month for almost 3 years for a $15,000 loan and I still have not gotten under the original $15,000 principal balance amount and I will not get there until the end of this year.”

Erick A. said:“Citibank was comparable to the devil in every way.”

“My original balance (5 years ago) with Citibank was $35,642.00. I have paid in total $15,293.96. And, my current balance is $32,459.69. The fact that banks can charge this type of interest on Student Loans is completely unethical. We should have government policies that address the gouging the banks are doing to student.”

Last year, Justin Kuehn, a law school graduate, filed a class action lawsuit against Citibank in April in Federal Court in Manhattan, also naming its former subsidiary, the Student Loan Corporation (SLC), and Discover Bank, the company to which it sold part of its student loan operations in 2010. Citibank continued to service the loans, even after they were sold to Discover.

Kuehn told the court that in November 2007, he had consolidated four private student loans with SLC, then owned by Citibank. Subsequently, his complaint charged, the defendants “engaged in a scheme to collect additional interest at the expense of borrowers of student loans.” He said the firms were “deceiving borrowers into believing that their monthly payments have been reduced because of an interest rate reduction, when in fact, the vast majority of the payment reduction is attributable to a reduction in the amount of principal being repaid each month.” That resulted, according to Kuehn, in thousands of dollars of additional interest being paid by student loan borrowers.

Given its outraged customer base and regulatory investigations still shadowing Citigroup, more lawsuits stemming from an ad campaign is a curious way to promote its brand.