Tulip Mania and the Madness of Crowds: Circa 2013 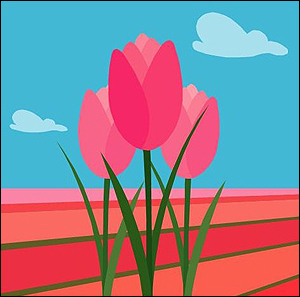 It’s time to visit the musty shelves of those rare book stores and ferret out a copy of Charles Mackay’s Extraordinary Popular Delusions and the Madness Of Crowds, or simply buy a reprinted version. Mackay’s book was first published in 1841and takes a hard look at greed-based manias like the tulip bubble in Holland in the 1600s and the South Sea bubble in the early 1700s.

At the peak of the tulip bubble in 1637, it is reported that a single tulip bulb sold for many times the annual wage of a skilled laborer. The South Sea bubble was built around the British South Sea Company which seduced investors with the vision of great wealth from trade with South America. The company’s share price collapsed in the early 1700s, seriously impacting the British economy. Subsequent investigations revealed bribes and trading manipulations to pump up the price in order to suck the public into buying shares.

Today, it’s difficult to assess where the greatest madness lies in terms of the stock market. Is it madness for Congress to sit idly by five years after the greatest Wall Street crash in history without making any serious effort at reforming the practices which toppled the titans of finance in 2008? Wall Street is still running its private justice system, adjudicating its own crimes against its customers in an industry-run system laden with conflicts of interest. Wall Street firms still issue highly questionable stock research to the public while engaging in proprietary trading for the house. Wall Street firms and their legions of lawyers fund the political campaigns of the very people sitting on banking and finance Congressional oversight committees. JPMorgan Chase is found to have gambled with insured bank deposits in high risk derivatives trading but not only does its Chairman and CEO, Jamie Dimon, keep his job but he continues to meet with the President of the United States at the White House as part of an industry trade group.

The madness extends to the city that houses Wall Street. The Mayor of New York City, Michael Bloomberg, has functioned as public servant to the people of the boroughs of Manhattan for the past 12 years. Magically, while ostensibly dedicating himself to public service over this period, the Mayor’s net worth has skyrocketed from $3 billion to $31 billion according to Forbes. Now we are learning that part of the Mayor’s business empire at Bloomberg LP was facilitating highly secure chat rooms for Wall Street traders, where the company vetted each trader before they could gain access, effectively keeping away the snooping eyes of the Feds. Wall Street traders had so much confidence in the security of these chat rooms that they turned them into market rigging mechanisms, openly engaging in collusion in their discussions, offering quid pro quo bribes, and turning the Libor interest rate benchmark and potentially foreign exchange and oil markets into a financial cesspool.

Wall Street On Parade first reported on the use of the Bloomberg chat room to facilitate crime on December 20 of last year. It’s almost a year later and the Justice Department has not shut down the chat rooms. This weekend, the Wall Street Journal reported that some of the largest Wall Street firms are now mulling over whether to bar their traders from using these chat rooms. After almost a year of prosecutors releasing chat room transcripts showing a level of corruption that would make the Mafia blush, Wall Street is still mulling things over.

The public, unfortunately, is too busy attempting to deal with the scorched earth economic landscape that Wall Street left in the wake of its 2008 collapse to pay close attention to the intricacies of the new round of insider shenanigans.

Here’s a quick lesson in the meaning of the term “distribution phase.” That’s when the stock market gets so frothy that rational minds become lemmings, companies like Twitter, without profits, go public and pop 73 percent on their first day of trading, and folks who lost their shirts in the dot.com bust of 2000 are now taking the proceeds of their maturing, insured certificates of deposit and seeking instant riches in the stock market. As this chart from Insider Monitor shows, over the past month a lot of big name insiders are heading in the other direction, to the tune of hundreds of millions of dollars.

Frothy markets, rigged markets, highly leveraged derivatives led markets can extend their upward trajectory for far longer than common sense would dictate. But that doesn’t make them any less dangerous.