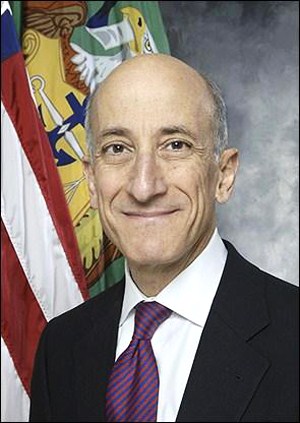 President Obama is about to do it again – appoint one of those revolving door Wall Street lawyers to head a critical top post at one of Wall Street’s key regulators. This time it’s the Chair of the Commodity Futures Trading Commission (CFTC). According to multiple leaks in the business press today, this afternoon the President will nominate Timothy Massad to head the CFTC – a man who spent 27 years at Cravath, Swaine & Moore, a core part of Wall Street’s legal muscle.

Massad is not coming directly from Cravath this time around. On June 30, 2011, Massad was confirmed by the U.S. Senate to serve as the Department of Treasury’s Assistant Secretary for Financial Stability.

If confirmed to head the CFTC, Massad will play a critical role in the regulation of derivatives, an area that has received heavy pushback from his former law firms’ clients. The agency is also involved in investigating major Wall Street firms for rigging the Libor interest rate benchmarks and collusion on the pricing of foreign currencies. Investigations of other potential commodity manipulations are also underway.

Is President Barack Obama breaking all the rules typically associated with creating a highly motivated work force within the Federal government by appointing outsiders instead of promoting from within the ranks of the regulatory agencies that oversee Wall Street?

What has happened to meritocracy where the long-tenured career public servant has a chance to one day head the agency. Is President Obama suggesting to the American people that no one from inside the regulatory bodies that oversee and prosecute Wall Street is fit to head them?

Massad, if confirmed, will join a long line of Obama nominees’ to lead Wall Street’s regulatory bodies with close ties to Wall Street.

One person who can vouch for Massad is John White, spouse of Mary Jo White who Chairs the Securities and Exchange Commission. White was a fellow law partner to Massad throughout his almost three decades at Cravath, Swaine & Moore. Mary Jo White spent the majority of her career at another Wall Street go-to law firm, Debevoise and Plimpton. At the time of her nomination to head the SEC, the Whites’ two law firms were representing every major Wall Street firm.

Under 18 U.S.C. § 208, the basic criminal conflict of interest statute, an executive branch employee is prohibited from participating personally and substantially in a particular government matter that will affect his own financial interests, as well as the financial interests of his spouse. In other words, under the law, John White’s conflicts are Mary Jo White’s conflicts.

Mary Jo White’s tenure at Debevoise dates back to 1976. Her spins through the revolving door are as follows:

1983 to 1990: Litigation partner at Debevoise and Plimpton, where she focused on white collar defense work, SEC enforcement matters and other corporate work.

1978 to 1981: Assistant United States Attorney in the Southern District of New York, where she became Chief Appellate Attorney of the Criminal Division.

Mary Jo White wasted no time after her confirmation before appointing one of her law partners from Debevoise, Andrew Ceresney, to become the Co-Director of the SEC’s Division of Enforcement – the unit that decides which cases move forward for prosecution – sharing the post with the Acting Director, George Canellos.

Just one year prior, Ceresney was credited with shepherding the now infamous National Mortgage Settlement — a deal big on promises and short on cash. Ceresney was JPMorgan’s lawyer but the deal brought closure also for Citigroup, Wells Fargo, Bank of America and Ally with the U.S. Department of Justice, 49 state attorneys general and various other Federal regulators over charges of mortgage, foreclosure and servicing fraud.

Jack Lew, the U.S. Treasury Secretary, is another member of the revolving door club. Lew worked at Citigroup from 2006 through early 2009, receiving millions in salary, including a $940,000 bonus in early 2009 that was paid with bailout funds from the U.S. taxpayer to the insolvent firm. Lew served as Chief Operating Officer of the very division that the SEC charged with hiding $39 billion of subprime debt off its balance sheet in Structured Investment Vehicles (SIVs).

During the confirmation vote on Lew, Senator Bernie Sanders of Vermont had this to say about the President’s nominee:

“Mr. President, the next Treasury secretary will face enormous challenges. Let me give you a few examples of what I mean. The next Treasury Secretary will play a central role in regulating and overseeing Wall Street and large financial firms. Let us never forget: as a result of the greed, recklessness, and illegal behavior on Wall Street, millions of Americans lost their jobs, homes, life savings, and ability to send their kids to college…

“We need a secretary of the Treasury who does not come from Wall Street, but is prepared to stand up to the enormous power of Wall Street. We need a Treasury secretary who will end the current Wall Street business model of operating the largest gambling casino the world has ever seen and demand that Wall Street start investing in the job creating productive economy. Do I believe that Jack Lew is that person? No, I do not…

“While millions of Americans continue to struggle through the worst economic crisis since the 1930s, Wall Street is doing phenomenally well. Financial institutions made over $143 billion in profits in 2012 – the most profitable year on record with the exception of 2006, just before the economic meltdown. Incredibly, the financial industry now makes almost half of all non-farm corporate profits in the United States, up from just about 10 percent in 1947.

“As someone who supports President Obama, I remain extremely concerned that virtually all of his key economic advisers have come from Wall Street.”

Confidence and trust in the men and women regulating Wall Street is critical to putting our financial system back on sound footing. Tragically, the President isn’t getting the message.