For more than two decades, financial columnist John Crudele has been hypothesizing on whether the Federal Reserve has its fingers in the stock market – directly or indirectly. Tampering with stocks is off limits to the Federal Reserve, as far as the public is aware. Its stated function is to serve as the central bank of the United States, focusing on achieving monetary policy through its open market activities in the bond markets and foreign exchange area.

But the New York Fed itself is helping to fuel suspicions about what’s going on within its cloistered walls at 33 Liberty Street in lower Manhattan. Of the 12 regional Federal Reserve Banks, the New York Fed is the only institution with a trading floor and highly sophisticated trading platforms. But despite multiple requests, the New York Fed will not provide a photo of the full trading area. Photos of its gold vault and currency vault are on line, but photos of the trading area is off limits, for unspecified reasons.

The resume of Kathleen Margaret (Katie) Kolchin is also noteworthy. On Saturday, September 17, 2011, Kolchin spoke at the annual Lehigh University Financial Services Forum. According to the handout given to participants, she works for the Federal Reserve Bank of New York, “performing equity research on the large cap US and European banks. Throughout her career as an Equity Research Analyst, Katie has covered various sectors, including Global Consumer Products, Global Real Estate, and Metals and Mining, at UBS Securities and also at a boutique investment bank.”

Even more curious is the resume Kolchin has posted at LinkedIn. The resume states that the New York Fed has an “internal equity research team,” of which she is the Senior Analyst. The team’s coverage includes Bank of America, Barclays, Citigroup, Credit Suisse, Deutsche Bank, Goldman Sachs, JPMorgan, Morgan Stanley, UBS, and Wells Fargo.

Kolchin more curiously states that she has “Developed a sell-side style research platform, including work product branding, distribution strategy, and internal client marketing presentations…” Kolchin adds that she uses her “capital markets experience and contacts” to garner insights into the market’s reaction to “stock and bond prices.”

“Branding”? “Distribution”? “Marketing”? Stock prices? What’s going on here. There are famous, long-tenured bank analysts all over Wall Street. It’s their job to deliver unbiased reports on the prospects for the stock performance (equity) of the big banks so that investors can make appropriate buy, sell and hold decisions. How is this the job of the New York Fed?

Even if a case could be made that it remotely relates to the function of the Fed, what kind of a statement is the Fed making about trusting the work of the legions of bank analysts already doing this work and disseminating it to pension funds and public investors. Why does the New York Fed feel it is necessary to duplicate the work with its own internal team.

According to the New York Fed’s web site, it employs approximately 3,000 people whose business heads report to the President and First Vice President of the Bank, with the exception of its internal audit function. The President and First Vice President report to the Board of Directors. The Board of Directors sits at the top of the power structure of this institution and has included the CEOs of the biggest Wall Street firms. Sandy Weill, Chairman and/or CEO of Citigroup at the time, served on the Board from 2001 to 2006. The New York Fed ended up funneling over $2 trillion in below market rate loans to Citigroup to prop it up during the 2008-2010 financial collapse. That came on top of other government assistance totaling over $345 billion in equity infusions and asset guarantees.

Jamie Dimon, Chairman and CEO of JPMorgan Chase, served on the New York Fed Board from 2007 to the end of 2012. Dimon continued to serve despite a public outcry calling for him to resign. In addition to managing the monetary policy for the Federal Reserve, the New York Fed also functions as an examiner of the big banks – the very banks whose CEOs sit at the top of its power structure. JPMorgan was under investigation by the New York Fed for losing $6.2 billion of depositors’ money in a failed bet on exotic derivatives – the London Whale debacle – while Dimon sat on its Board.

The Fed explains its relationship with its Primary Dealers as follows:

“The Federal Reserve conducts open market operations with primary dealers—government securities dealers who have an established trading relationship with the Federal Reserve. So while the target policy rate is the uncollateralized lending rate between banks (fed funds), the Fed operates in the collateralized lending market with primary dealers (repo). This structure works because the primary dealers have accounts at clearing banks, which are depository institutions. So when the Fed sends and receives funds from the dealer’s account at its clearing bank, this action adds or drains reserves to the banking system.”

Earlier this month, the President of the New York Fed, William (Bill) Dudley, made a stunning admission about some of its Primary Dealers. Speaking at the Global Economic Policy Forum in New York City on November 7, Dudley stated that some of the largest firms on Wall Street had an “apparent lack of respect for law, regulation and the public trust.” Dudley went on to say:

“There is evidence of deep-seated cultural and ethical failures at many large financial institutions.  Whether this is due to size and complexity, bad incentives or some other issues is difficult to judge, but it is another critical problem that needs to be addressed. Tough enforcement and high penalties will certainly help focus management’s attention on this issue. But I am also hopeful that ending too big to fail and shifting the emphasis to longer-term sustainability will encourage the needed cultural shift necessary to restore public trust in the industry.”

Dudley is perhaps not the best candidate to be lecturing Wall Street on public trust. As we previously reported, Dudley’s wife, Ann Darby, was a former Vice President at JPMorgan Chase and has been receiving $190,000 a year from the Bank from deferred compensation plans during her husband’s presidency at the New York Fed. According to a disclosure document, those $190,000 payments are to continue until 2021.

I queried the New York Fed last week to see if, following our disclosure of this conflict in 2012, the payments had stopped. I received the following response:

“With regard to the deferred compensation, as we have previously stated, after further discussions and analysis by the New York Fed’s lawyers, it was agreed that Ms. Darby’s fixed deferred compensation from her previous employer neither posed a conflict nor required a waiver.”

At the current dividend rate of 38 cents a quarter per share of JPMorgan Chase stock, $190,000 is equivalent to receiving the annual income on 125,000 shares of JPMorgan stock. That seems like a big deal, especially considering that Steven Gilchrist is being criminally prosecuted by the U.S. Department of Justice for working at the SEC and owning a handful of bank stocks.

According to a statement by U.S. Attorney Preet Bharara earlier this month, when Gilchrist was charged, “We will not tolerate abuses of trust and violations of law by individuals tasked with safeguarding our markets. As an SEC examiner, Steven Gilchrist had a duty to avoid conflicts of interest that might compromise or even appear to compromise his integrity. Instead, as alleged, he violated the SEC’s internal rules about stock ownership and repeatedly lied to the SEC about his holdings.”

According to the complaint filed by Bharara, Gilchrist asked the SEC for a waiver on holding shares of Citigroup, Bank of America and Morgan Stanley on the basis that he had inherited the stocks from his father, had owned them for a long time without any trading, didn’t think of them as investments, and that they made up a “fraction of his portfolio.” Gilchrist, a lowly compliance examiner at the SEC at the time of his alleged infraction, faces 15 years in prison if convicted.

One can only pray that the New York Fed is managing its monetary policy more competently than it’s managing its public image. The 2008 to 2010 epic collapse of Wall Street suggests otherwise. 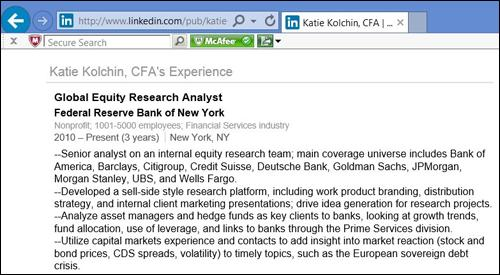