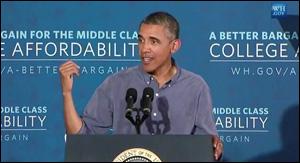 President Obama finished up his August bus tours with speeches to high school and college students on his plans to make college more affordable. The President’s slogan of “college affordability” belies a growing crisis in the U.S. – student loan debt has now eclipsed credit card debt and stands at $1.2 trillion according to the Consumer Financial Protection Bureau (CFPB).

The Financial Stability Oversight Council (F-SOC), a unit of the U.S. Treasury, warned in its 2013 annual report that high levels of student debt could have severe negative impacts on the U.S. economy, writing that it could “impact demand for housing, as young borrowers may be less able to access mortgage credit. Student debt levels may also lead to dampened consumption.”

According to F-SOC, while household debt in general became more current on payments last year, 11.7 percent of student loans were more than 90 days delinquent. The report noted that heavy student debt burdens and a poor job market are contributing factors that are pushing borrowers into delinquency.

Acknowledging these alarming trends, the CFPB issued a call for public comment in February of this year, seeking ideas for making college more affordable and asking students and community groups to report their experiences with private student loans – those made predominantly by banks. The CFPB received almost 30,000 responses, including an outpouring of horror stories from desperate and despairing young people who were skimping on heat and food as they watched their original loan amount double in size from unexplained penalties, fees and hiked interest rates.

The President’s promises to work on plans to make college more affordable should not preempt a Congressional  and U.S. Department of Justice investigation into whether lending laws have been violated. These young people, in many cases, provided their names and addresses to assist in getting to the bottom of whether serious crimes have been committed.  Indeed, numerous regulatory reports draw a comparison to what is happening with student loans and what happened in the big banks’ questionable and, frequently unlawful, mortgage lending practices, leading to the housing collapse.

The CFPB released its own report in May of this year, raising further alarms as to economic impact. The report expressed concerns that job growth from the usual entrepreneurship of college graduates may be negatively impacted because their heavy debt burdens will disqualify them from small business loans. Household formations, which provides critical boosts to the economy, may also be impaired.

A detailed report on negative economic impacts was submitted earlier this year to the CFPB by the Center for American Progress and Campus Progress. The groups raised the following alarms:

The dangers to the economy from reduced consumption owing to shrinking disposable income extend from the young college graduates to the parents and grandparents who frequently co-signed the private student loans with banks. Many of the co-signors have now been forced to pay debts that spiraled out of control as interest was compounded on the debt while the student was in school for 4 to 7 years. Federal Stafford loans charge zero interest while the student is in school but private student loans from banks add the accrued interest to the principal (capitalization), creating a dramatic compounding effect poorly understood by the borrowers.

Many public interest groups are raising the specter that the same forms of predatory lending that occurred in the subprime mortgage market is at work in the private student loan market. Americans for Financial Reform reported the following to CFPB:

“Predatory private student lending shattered the dreams of many individuals seeking to better their lives through education.  These loans have become a curse, not an opportunity, for all too many borrowers. Those harmed by lender predatory practices are now stuck trying to get those same lenders to provide relief.

“Large and growing numbers of private student loan borrowers are falling behind on their loans.  Data is not publicly available on precisely which lenders, loan features and borrowers are most at risk of defaulting.  However, the available data strongly suggests that a large portion of private student loan (PSL) defaults are attributable to irresponsible lending practices that became particularly widespread during the period leading up to the credit crisis, roughly from 2005- 2008.  Private student loan origination during these boom years was driven by the demand for student loan asset backed securities (SLABs).  The loans were characterized by high volume, lax underwriting, heavy use of Direct to Consumer (DTC) lending, loan amounts higher than Cost of Attendance, and variable interest rates with very high margins.”

It’s time the plight of these students and their families moved from obscure government web sites to the front pages of our Nation’s newspapers. To borrow a phrase from another era, “it’s the economy, stupid.”