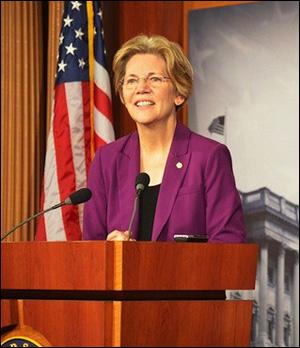 In February of this year, the Consumer Financial Protection Bureau (CFPB), the new Federal agency that Senator Elizabeth Warren fought so hard to create against a tsunami of backlash from Wall Street and Republican ranks, asked the public to comment on making college more affordable and to describe their student loan experiences with private lenders. There was a tidal wave of nearly 30,000 responses.

Public interest groups, nonprofit community programs, and thousands of college graduates responded. The most tragic stories came from students who augmented their Federal student loans with loans from the big Wall Street banks like Citibank, a unit of the bailed out poster child for bad behavior, Citigroup. Citibank borrowers tell horror stories of living without heat, living on food donations from friends, and watching their monthly student loan payment skyrocket without warning from $374 to $1025.53.

The levels of stress and despair that ring out from these letters should raise a cautionary red flag to every American with a conscience. These young people are America’s future.

Two prominent themes emerge from this underreported but, nonetheless, epic human suffering. First, students who took large private student loans from Citibank frequently took the option of deferring the interest until after graduation since they had no means of paying it before getting a full time job. The students failed to understand the dramatic future impact of that decision.  On Federal Stafford loans, the Federal government pays the interest while the student is in school. On private student loans, that interest is added to the original principal (capitalized), creating a future time bomb in terms of how much interest will eventually be due.

Linda F. reported that she had “paid approximately 50% of the original balance and still owe more than I borrowed due to high interest rates and the times I had to put loans in deferment or forbearance. Also, these loans accumulated a significant amount of interest while I was in school…I take responsibility for the debt I took on, but it was not my fault that my industry (architecture and building) was taken down by the very banks that I owe. I will be paying on these loans for most of my life…”

Linda F. references the second theme that is spread throughout the complaints of the graduates. The Wall Street banks crushed the economy with their implosion in 2008, leaving a scarcity of jobs for graduates. Many graduates are now unemployed, underemployed, or working in low wage jobs.

Amanda B. reported that she “graduated with over 100,000 in student loan dept [sic] from citibank that has recently been sold to discover. I have been laid off twice since graduation, entering the job market in 2008 when things started going downhill, economy wise. I currently make 400 a week after taxes, and my student loan payment is 922 a month. That is over half of my monthly income. I have luckily been able to pay it up until my recent lay off, I have started a new job and will begin payments again in April. I cant even think about the amount of debt that I have without feeling sick to my stomach. And Ive told my parents not to expect grandkids until these are paid off. I have a dream of starting a business and I cant take that kind of risk with that debt. I went to college to follow my dreams and college debt seems to be keeping me from my furture. It saddens me to think I would have been better off without my education.”

Audrey C., who graduated in June 2009 with a 3.8 grade point average, told the CFPB the following: “In September 2009, I was laid off from my full time job. I couldn’t afford health insurance, and so when I broke my ankle in December of 2009, requiring surgery and five months of physical therapy, I considered bankruptcy for the first time — but couldn’t afford to file. My unemployment checks barely covered the basics, and luckily some friends owned a bakery or else I wouldn’t have eaten during that period. After I healed, I struggled but made sure I always had work. While applying for hundreds of jobs in my chosen field without calls back, I’ve worked one low-wage job after another. While I’ve been promoted into management at most of these jobs, I only recently took yet another low wage job that actually provides health benefits — the first health care I’ve had since 2008. I’m still only making $15 an hour. At 22, I made the most money I have ever made, before or since. I declared Chapter 7 bankruptcy this year after being sued for $12k by Citibank — (which is $3k more than I made in all of 2011)…”

At both online forums and in reports to the CFPB, graduates talk of being hounded early in the morning, at night, and on the job by collection agencies to whom Citibank has referred the job of collecting payments. Graduates also express the sentiment that there is no regulatory body attempting to rein in the abuses.

Aimee M. told the CFPB: “The private student loan industry is getting away with torturing young adult’s lives. There is no supervision of the corporations who provide private student loans. There is no supervision on the application process, the credit check verification, the approval amount, loan disbursement, or repayment…In my personal experience, Citibank Private Student Loans has violated my rights as loan borrower…”

A number of students told the CFPB that they felt Citibank engaged in irresponsible lending, effectively throwing large sums of money at students. Allison L. reported: “By the end of my schooling, only $80,000 was actually for classes and books and school related fees, and $80,000 was extra money. Citibank should not have lent the additional money to me, as I documented that ‘I lived at home/with parents,’ and my tuition, books and fees clearly did not cost as much as the amount that was dispensed.”

Brooke Densing of the Hope Center in Buffalo, New York, a program to help with financial literacy and provide a legal clinic for borrowers, addressed the impact on the college graduates’ health, writing: “…the stress and social/psychological disconnect that happens once someone is in severe debt has intense consequences on their health, quality of life, and their economic well- being. Often, causing depression, anxiety, stress related illnesses, etc…We used to be able to tell clients that going to college breaks generational poverty; and 90% of people in generational poverty will NEVER return to poverty in their lifetime if they graduate from college. We can no longer guarantee economic success for students in America.”

In Part III tomorrow, we will look at the overall economic implications to the country of having what should be the most energetic, creative and ambitious members of our society feeling the hopelessness and desperation of being a debt slave for decades of their working life.