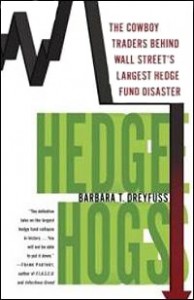 Hedge Hogs, the Barbara Dreyfuss book that hit number 9 on the Washington Post’s Hardcover Bestseller List last week, should have a cautionary logo: “Don’t Start Reading This Book Late In the Day: It Could Be Hazardous To Your Sleep.” If you are an avid follower of Wall Street, you’ll read it in one sitting.

Sales of the book may soar if, as reported yesterday, JPMorgan reaches an estimated $500 million settlement with the Federal Energy Regulatory Commission shortly for rigging energy markets and we learn the details of just what its traders were doing to manipulate energy prices.

What does this have to do with Hedge Hogs? The Dreyfuss book is the fast moving and riveting account of Amaranth Advisors LLC, the hedge fund that went from holding $9.668 billion in client assets in August 2006 to flaming out in losses exceeding $6 billion in less than four weeks; the culprit – out of control energy trading and efforts to rig the market according to the government.

As we know by now, there’s typically one cowboy trader at the center of collapsing these firms. At Amaranth  Advisors, Brian Hunter dutifully plays the role to the hilt. On the day of Armageddon, Monday, September 18, 2006, as the market continues to hammer the firm’s trades lower and executives frantically scramble to find a buyer for the firm’s toxic waste; while TV screens around the trading floor are sounding the death knell for the employees’ jobs, Hunter is seemingly detached from the havoc he has brought to the lives of his colleagues and the fortunes of the firm’s clients like the San Diego County Pension Fund.

Dreyfuss writes: “Hunter remained as cool and calm as ever, snickering at inside jokes with his team. Someone picked up a football a broker had given them as a marketing tool months before and they tossed it around the trading floor. He and his team seemed immune to the drama swirling around them.”

The most disturbing as well as fascinating  part of the story is the role played by JPMorgan Chase and its CEO, Jamie Dimon, in that pivotal meltdown week of September 18, 2006. How many times are we going to read that JPMorgan refused to release billions in margin capital it’s holding for a collapsing company before we start to question why it always seems to be JPMorgan on the scene with the body bag and poking around the corpse.

Dreyfuss takes the reader into the nail-biting minutes of finding out if a deal with Goldman Sachs to take the problematic energy trades off Amaranth’s hands is going to fly. Goldman wants a concession fee of $1.85 billion to do the deal. The energy markets have opened on that Monday morning and Amaranth is bleeding millions with every down tick. The parties involved are on a 10 a.m. conference call.  Dreyfuss writes:

“To complete the deal with Goldman, it would need J.P. Morgan to release some of the $2.513 billion in its margin account – funds deposited to back up its energy trades.

“Amaranth was facing annihilation. It urgently needed to find a buyer for the energy book. The market had just opened, and already Amaranth was losing heavily.”

The following morning arrives and there’s a new plan in place courtesy of Jamie Dimon. JPMorgan will team up with another hedge fund, Citadel, and take the problem energy trades away. But the concession fee is no longer $1.85 billion; it’s now $2.5 billion.

Dreyfuss was a Wall Street analyst for 20 years before becoming a correspondent for The American Prospect and a contributing writer for The Washington Monthly, Mother Jones, and The Veteran. That background provides a key benefit to the reader; Dreyfuss is able to strategically select the essential elements that make for an accurate and fast-paced read laced with illuminating Wall Street lore while sparing the lay reader useless financial jargon.

This riveting book gives us much to think about. Why didn’t regulators see from this 2006 financial collapse of a $10 billion trading firm that risky trading operations or improperly supervised risk might take down other major financial players? Regulators knew that all the major Wall Street firms were running their own internal hedge funds.

But here we are today, in 2013. We’ve seen the collapse of some of the oldest names on Wall Street in 2008, a taxpayer bailout that ran into the trillions of dollars including the loans from the New York Fed, a collapse of the U.S. housing market for the first time since the Great Depression, an economy still struggling to rebound and provide jobs for millions of unemployed Americans.

And still the cowboys have not been separated from the casinos and the casinos have not been separated from the insured banks. Six long years after Amaranth Advisors collapsed, along comes the same swashbuckling trader in the form of Bruno Iksil, the London Whale at JPMorgan Chase. Iksil does exactly what Brian Hunter did: he makes outsized wagers on illiquid derivatives that are so huge that there is no one else big enough to take the other side of an exit trade.  He has become the market and the market begins to dive when there is no more money available to continue to pump it skyward. He’s trapped and loses $6 billion dollars – the very same amount lost at Amaranth.

But there is one remarkable difference between what Hunter did in 2006 and what JPMorgan allowed its London Whale trader to do in 2012.  Amaranth provided a disclosure to its hedge fund investors telling them that they could lose all their money. JPMorgan Chase’s London Whale trader used depositor funds – a significant portion of which were insured against loss by the Federal Deposit Insurance Corporation (FDIC), which, in turn, is backstopped by those same folks who bailed out the cowboys in 2008 – you and me, the U.S. taxpayer.