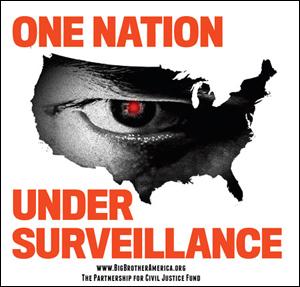 The Partnership for Civil Justice Fund Has Created a Public Web Site to Address the Sprawling Surveillance of Americans: BigBrotherAmerica.org

Last evening, The Guardian newspaper published a document classified by the U.S. government as Top Secret, revealing that the Obama administration is engaged in a domestic surveillance program involving the phone records of tens of millions of Americans.

The Guardian article is written by Glenn Greenwald, formerly a columnist for Salon and author of the 2011 book With Liberty and Justice for Some: How the Law Is Used to Destroy Equality and Protect the Powerful. The publisher describes the book as a no-holds-barred indictment of a two-tiered system of justice that “ensures that the country’s political and financial class is virtually immune from prosecution, licensed to act without restraint, while the politically powerless are imprisoned with greater ease and in greater numbers than in any other country in the world…[Greenwald] shows how the media, both political parties, and the courts have abetted a process that has produced torture, war crimes, domestic spying, and financial fraud.”

This morning, the New York Times is characterizing the surveillance program as “collecting business communications records.” The Times appears to base that assumption on the fact that the company that has been secretly releasing the phone records is Verizon Business Network Services. But according to BusinessWeek, that division of Verizon “serves residential customers, businesses, and communications wholesalers, as well as federal, state, and local government entities.” Ironically, it also provides security products to its customers.

If one objective of the government was to learn which federal government workers were leaking information to journalists, this would appear to provide those records for calls made using Verizon. It is not yet known if other telecommunication companies were involved.

The Top Secret court order was issued by Judge Roger Vinson on April 25 of this year and is set to expire on July 19, 2013 if not renewed. Vinson serves on the Foreign Intelligence Surveillance Court (FISA) which has authority in these matters under the U.S.A. Patriot Act. The court order was requested by the FBI but the order instructs Verizon to turn over the records to the National Security Agency (NSA).

The reaction from the American Civil Liberties Union (ACLU) was swift. It released a statement from Jameel Jaffer, Deputy Legal Director, calling it “beyond Orwellian” and noting that it provides further evidence of the extent to which basic democratic rights are being surrendered in secret to the demands of unaccountable intelligence agencies.”

The ACLU said the court order was made possible by the U.S.A. Patriot Act’s Section 215, a provision that authorizes the government to seek secret court orders for the production of “any tangible thing” relevant to a foreign-intelligence or terrorism investigation.  Under the law, telecommunications companies are prohibited from disclosing that they gave the government their customers’ records.

Michelle Richardson, Legislative Counsel with the ACLU’s Washington Legislative Office said: “This disclosure also highlights the growing gap between the public’s and the government’s understandings of the many sweeping surveillance authorities enacted by Congress. Since 9/11, the government has increasingly classified and concealed not just facts, but the law itself. Such extreme secrecy is inconsistent with our democratic values of open government and accountability.”

When the program was launched, PCJF sent a notice to civil rights advocates that said: “Most people are not aware that silently, but constantly, the government is now watching, recording your everyday travels and storing years of your activities in massive data warehouses that can be quickly ‘mined’ to find out when and where you have been, whom you’ve visited, meetings you’ve attended, and activities you’ve taken part in…You’re being tracked routinely, without probable cause, without a warrant and without even a suspicion that you have committed a crime.”

According to PCJF, the Department of Homeland Security has created customized software to integrate the surveillance data obtained through all the different vendor systems that are on the market and used by different localities. The federal government has a massive data storage center for tag reader information located in Northern Virginia.

With a plate and a cross-reference to other databases (like the Department of Motor Vehicles, credit card companies and phone records) a full profile of the individual can easily be created. The fusion of license plate reader data with commercial databases and intelligence databases gives the government virtually unlimited knowledge of an individual’s activities and associations.

PCJF has created a national campaign, “One Nation Under Surveillance,” with a proactive website www.BigBrotherAmerica.org.