The Koch Brothers as Newspapermen 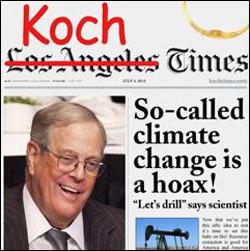 Corporate media is abuzz with the possibility that the Koch brothers will use their majority-control of Koch Industries to buy eight daily newspapers owned by the Tribune Company, including the Los Angeles Times and Chicago Tribune, the fourth and ninth largest dailies in the country, respectively. If the Kochs’ bid is successful, it will signal a plan by the Kochs to stop hiding behind front groups and the launch of a full-scale, open assault on reshaping the country to fit their agenda: deregulation, privatization, and dramatically shrinking the Federal government.

Tribune also owns two of the largest dailies in the battleground state of Florida: the Orlando Sentinel and the Sun Sentinel out of Fort Lauderdale. Other dailies include The Baltimore Sun, Hartford Courant, The Morning Call and Daily Press.

According to the 2013 Forbes list of billionaires, both Charles and David Koch increased their wealth by $9 billion (that’s billion with a “b”) year over year, each now worth $34 billion. But obscene wealth has never been enough to satisfy the Kochs. David ran on the Libertarian ticket for Vice President in 1980, alongside Ed Clark. The twosome promised to abolish Social Security, the minimum wage, and virtually all Federal watchdog agencies including the SEC, FBI, and EPA. They received 1 percent of the vote.

From that point on, the Kochs’ strategy was to push their agenda standing in the shadows behind multi-layers of front groups structured as nonprofits – thus allowing the unwitting taxpayer to subsidize their non-populist political agenda. Watch the video as David Koch stands before an Americans for Prosperity convention, as its leaders explain how they formed Tea Party groups, and Koch says he and his brother, Charles, provided the start up funds for Americans for Prosperity.

In addition to Americans for Prosperity, and an earlier entity, Citizens for a Sound Economy,  last year it was learned that for the past 35 years, as the Cato Institute pumped out its free market, small government white papers by the boatloads under the guise of an independent think tank, Charles and David Koch were two of a handful of men who owned the Institute outright. How does one own a nonprofit? By having a very smart Kansas lawyer.

In addition to their front groups, the Koch brothers host secret shindigs at tony resorts to map out their political strategy with a 200-plus roster of one-percenters and well-placed media types. In a June 2011 confab at the luxury Ritz-Carlton resort in Colorado, the brothers promised the “mother of all wars” to take the White House in 2012. It is estimated that the pair spent upwards of $400 million in their failed attempt to put Mitt Romney and Paul Ryan in the White House.

The Koch Brothers’ rapidly growing fortune stems from their majority ownership of Koch Industries, Inc., a private global conglomerate with a presence in over 60 countries, including interests in oil, refining, pipelines, paper products, chemicals, and fertilizer. The commodities trading operation stretches from New York to London, Geneva, Singapore, Mumbai, and Rotterdam. Koch Industries had revenues of $115 billion last year, according to Forbes.

In 2000, the CBS investigative news program, 60 Minutes, did a story on Koch Industries, revealing the details of what one of the dissident brothers, Bill Koch, was alleging in Court documents. “Bill Koch filed a lawsuit in federal court claiming that much of the oil collected by Koch Industries was stolen from federal lands. At the trial, 50 former Koch gaugers testified against the company, some in video depositions. They said Koch employees had a name for cheating on the measurements.” It was called the Koch Method. “The company used the Koch method with virtually all its customers. In the 1980s alone, Koch records show those so-called adjustments brought the company 300 million gallons of oil it never paid for. And it was pure profit. Bill Koch says that profits from that oil were a minimum of $230 million…In December 1999, the jury found that Koch Industries did steal oil from the public and lied about its purchases – 24 thousand times.” With a record like that, one can see why getting rid of Federal watchdogs would be on their agenda.

We may also have a window into how the Kochs would run a print media empire based on the events that occurred in the last weeks of the 2008 Obama presidential campaign.

Seven weeks before the election of 2008, when race baiting and playing on people’s fears of a black president were running full throttle, approximately 100 of the largest newspapers and magazines in the U.S., including the New York Times and Wall Street Journal, distributed millions of DVDs of a documentary, “Obsession: Radical Islam’s War Against the West.” Altogether, including a separate direct mail campaign, 28 million DVDs flooded households in swing voter states.

The nonprofit organization named on the packaging of the DVD as the entity behind the film, the Clarion Fund, Inc., had no known history of operations and had a virtual office address in New York City. In our 2010 investigative report, we traced the $17,778,600 it cost to fund this operation directly to the doorstep of a Koch-connected nonprofit called Donors Capital Fund.

Donor’s Capital Fund is a “supporting organization” to Donors Trust, a sister nonprofit. Both advocate for small government. Charles Koch’s footprints are all over Donors Capital and Donors Trust. As we reported in 2010:

“Two grantees receiving repeat and sizeable grants from Donors Capital are favorites of the Koch foundations: George Mason University Foundation and Institute for Humane Studies. Another tie is Claire Kittle. A project of Donor’s Trust is Talent Market.org, a headhunter for staffing nonprofits with the ‘right’ people. Ms. Kittle serves as Talent Market’s Executive Director and was the former Program Officer for Leadership and Talent Development at the Charles G. Koch Charitable Foundation. Then there is Whitney Ball, President of both Donors Capital Fund and Donors Trust. Ms. Ball was one of the elite guests at the invitation-only secret Aspen bash thrown by Charles Koch in June of this year, as reported by ThinkProgress.org. Also on the guest list for the Koch bash was Stephen Moore, a member of the Editorial Board at the Wall Street Journal. Mr. Moore is a Director at Donors Capital Fund. Rounding out the ties that bind is Lauren Vander Heyden, who serves as Client Services Coordinator at Donors Trust. Ms. Vander Heyden previously worked as grants coordinator and policy analyst at the Charles G. Koch Charitable Foundation.

Some media outlets are speculating that the Kochs might just be interested in diversifying their holdings at Koch Industries and wouldn’t meddle in the affairs of the newsroom. Unfortunately, the facts on the ground don’t support that view. In 2011, a contract leaked out between the Charles G. Koch Charitable Foundation and Florida State University. The contract, in exchange for a donation of $1.5 million, gave the Foundation the right to vet and veto faculty hires for a program based on “political economy and free enterprise.”

Despite the Kochs’ outward expressions of love for freedom, it’s mostly about their love for control. As we reported on September 12, 2011:

“One of those freedoms most treasured by the Koch brothers is their ability to see a research study done by one of their funded economics departments, then have its dubious data quoted from the mouth of a funded ‘news’ celebrity. From 2002 through 2006, the Koch funded Mercatus Center paid Lawrence Kudlow, a CNBC co-host and later host of his own show, ‘The Kudlow Report,’  a total of $332,500 through his consulting arm, Kudlow & Co. LLC. I obtained the information from public filings Mercatus made with the IRS. It is not known if the Mercatus Center continued to pay Kudlow after 2006. The Mercatus tax filings show $3.1 million paid in a line item called ‘honoraria’ from 2001 through 2007. Emails and phone calls to Kudlow, the CNBC legal department, and three communications executives of both CNBC and NBC/Universal were met with silence, despite a week’s lead time to respond.”

The folks at Forecast the Facts have put up a petition against the Koch brothers expanding their grip into U.S. newsrooms. You can sign the petition at this link.