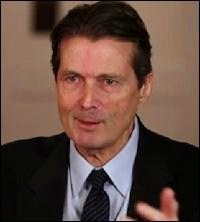 The Untouchables, which aired last evening on the PBS program “Frontline,” builds on the outstanding 2012 series co-produced by Martin Smith and his wife, Marcela Gaviria, Money, Power, and Wall Street. (I highly recommend watching all four episodes of the earlier documentary, then rewatching The Untouchables if you want an epiphany into why Wall Street can’t be tamed.) Smith is producer, writer and correspondent in the latest effort.

Unfortunately, last night’s program sought an answer to an abbreviated question: why has no Wall Street executive been criminally prosecuted for fraud tied to the sale of mortgages. The unabbreviated question and the one that infuriates Americans is: why has no executive of a major Wall Street firm been criminally prosecuted for anything.

If the U.S. Justice Department was serious about doing its job, it has a cornucopia of crimes to pick from: Wall Street CEOs and CFOs attesting to fraudulent financial filings with the SEC, money laundering, lying in prospectuses, illegal foreclosures, rigging the Libor interest rate benchmark and then selling interest rate swaps based on a rigged index to school districts, cities and counties across America, manipulating the futures market with a rigged Libor interest rate, and so forth.

By asking the attenuated question, viewers may reach a myopic conclusion: that the head of the Criminal Division of the U.S. Justice Department, Lanny Breuer, is not prosecuting because he is too afraid of losing cases. A much stronger case can be made that Breuer is too afraid of facing his law partners when his stint is up at DOJ and he returns to his high paying job at the law firm of Covington & Burling — which represents Wall Street’s denizens of casino capital.

Eric Holder, the U.S. Attorney General, Lanny Breuer, the Assistant Attorney General for the Criminal Division, and Dan Suleiman, deputy chief of staff and counselor to Lanny Breuer, all hail from the corporate law firm, Covington & Burling. Their former partner at the firm, John Dugan, a former bank lobbyist, headed the Office of the Comptroller of the Currency (OCC), which regulates all national banks, from August 4, 2005 through August 14, 2010 – the years leading up to and including the financial crisis.

When Dugan stepped down from the OCC in 2010, he returned to Covington & Burling’s Washington, D.C. office and now chairs the firm’s Financial Institutions Group, providing legal counsel to many of the same banks he supervised for five years. It is reasonable to assume that Holder, Breuer and Suleiman may return to their high-pay partner positions at Covington & Burling when they leave the Justice Department.

As we previously reported:

In an August 17, 2006 decision against tobacco companies (while Dugan was sitting as a top bank regulator in the Bush administration), Judge Gladys Kessler of the U.S. District Court for the District of Columbia found that “Cigarette smoking causes disease, suffering, and death. Despite internal recognition of this fact, Defendants have publicly denied, distorted, and minimized the hazards of smoking for decades.” The Court issued a blistering analysis of the role of Covington & Burling:

The Court made clear exactly which law firms it was singling out in a footnote, stating: “Despite the apparent conflict of interest, a few law firms, particularly Covington & Burling and Shook, Hardy & Bacon, represented the shared interests of all the Defendants and coordinated a significant part of the Enterprise’s activities.”

Smith will hopefully pursue in a future documentary how partners from a law firm with this history ended up as a top bank regulator in the Bush administration and top slots at the Justice Department in the Obama administration.

At one point in the program, Smith asks Lanny Breuer why he has failed to indict any senior Wall Street executives. Breuer responds: “I think there was a level of greed, a level of excessive risk taking in this situation that I find abominable and very upsetting…but that is not what makes a criminal case.”

There are a number of skeptics in the program who are not buying what Breuer is peddling as excuses. Jeff Connaughton, former chief of staff to former Senator Ted Kaufman, says: “You’re telling me that not one banker, not one executive on Wall Street, not one player in this entire financial crisis committed provable fraud…I mean, I just don’t believe that.”

Equally dubious of Breuer’s position is former New York State Attorney General, Eliot Spitzer, who bluntly says that the prosecutors at the Justice Department “have not done what needed to be done.”

The program leaves the public with the impression that the “untouchables” are not just the fat cats on Wall Street but also the top ranks at the U.S. Justice Department whom the President has seen fit to leave in their seats, despite their lack of prosecution of Wall Street criminals.

Smith has produced for Frontline for 28 years on topics as varied as revolution in Central America, the fall of communism in Russia, to the rise of Al Qaeda and the war in Iraq. The Untouchables was co-produced by Linda Hirsch and Ben Gold.