The Marines Have Landed: The Role of Government and Tomorrow’s Election 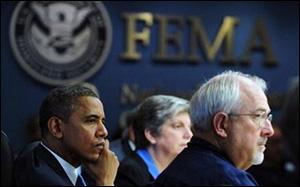 The cries for assistance from desperate families and elderly in the flood ravaged areas of the Rockaways and Staten Island could not be met by the already overwhelmed New York City responders and volunteers, and so the Marines have now stepped in to pump basements with their sophisticated equipment and provide other relief.

Likewise, New York City did not possess the ability to get the flooded subway tunnels pumped out in a reasonable amount of time – leaving the danger that the salt water would further eat away at the electrical systems.  The Army Corps of Engineers stepped in with high tech equipment they used during Hurricane Katrina in New Orleans and had the job completed within a few days.

People whose homes collapsed like crumpled match-sticks under a tidal surge as high in some places as 14.8 feet, are receiving help from the Federal Emergency Management Agency (FEMA), which is providing up to two weeks of free rent in hotels or apartments until a more formal housing plan for the newly homeless can be arranged.  FEMA has already approved $158 million in disaster assistance.

The Department of Defense, through FEMA, has provided millions of gallons of gasoline and diesel; millions of ready to eat meals; dozens of electrical generators; and sophisticated storm relief equipment.

This is just a small measure of the multitude of ways the Federal government has demonstrated over the past week why we pay Federal income taxes and why those who want to turn over critical services to private enterprise to manage for profit are dangerous to our safety, our future and our way of life in America.

Mitt Romney and Paul Ryan believe in the small government, self reliance dogma of the right wing of the Republican party.  Hurricane Sandy has ably demonstrated that when everything you owned on Monday – your home, your clothing, your furniture – is swept out to sea on Tuesday, even the most self reliant among us may need a helping hand.

Romney, Ryan, the Tea Party, the conservatives want that helping hand to come from volunteers at no cost to taxpayers.  But the absurdity that volunteers can fulfill all urgent needs in a major disaster, in time to save lives and property and the economic interests of the area impacted, is irrational nonsense.

Could volunteers commandeer C17s loaded with trucks and equipment into impacted hurricane areas; could they get their hands quickly on millions of ready-to-eat meals and millions of gallons of gasoline and diesel.  Do they have sophisticated equipment to pump out the tunnels and get mass transportation up and running.

Volunteers rose to the occasion in this crisis as Americans have always done in times past.  They donated food, clothing, and blankets and helped in the distribution.  But the essential tasks of getting collapsed systems up and running fell correctly to tax-supported institutions whose workers are paid a salary to put themselves in harm’s way in times of disasters.

Tomorrow, tens of millions of Americans will turn out at the polls and determine what kind of America we build for the next generation.  Will we build an America where the elderly in retirement are stripped of the dignity and peace of mind of a monthly Social Security check – after paying into the system for decades?  Will we build an America where essential services like FEMA and medical care for the aged are privatized and left to the rapacious demands of profit driven corporations? Will we continue to perpetuate a system where the wealthiest among us pay a tax rate of 14 percent through tax dodges while the struggling middle class pays far more.

Hurricane Sandy was a wakeup call on so many levels: on climate change; on the role of government; on our lost decade of obsessing over terrorists in caves in foreign lands while ignoring our own crumbling infrastructure; of calling systemic corruption on Wall Street the free markets and then spending trillions of our national treasure to shore up the shareholdings of the very individuals who perpetuated the frauds.

Hurricane Sandy was indeed a wakeup call.  We’ll find out tomorrow if anyone really woke up.