Sproul’s voter registrations firms were investigated in the past for fraud but never prosecuted.  To blunt scrutiny, Sproul says he was asked by the Republican National Committee (RNC) to set up a front company with no connection to him for this election cycle.  According to state Republican committees, the RNC then turned around and recommended the firm, Strategic Allied Consulting, to Republican committees in swing voter states.

The ruse only came out because of a quick thinking blogger named Greg Flynn at BlueNC.com  who investigated the trail of Strategic Allied Consulting and found that the web site was registered to Sproul’s firm, even though the firm’s corporate filing in Virginia made no mention of Sproul as an officer.  Flynn intuitively took a screen shot of the web site registration, which was abruptly changed shortly thereafter.  Read Flynn’s first-rate investigation and screen shot here.

Petti, the lawyer for Strategic Allied Consulting, has sent a termination letter to at least one of the workers in Florida suspected of engaging in voter registration fraud.  Along with telling the worker to “tell the truth,” if the worker decides to speak to the Supervisor of Elections in Palm Beach County, Petti also admonishes the worker as follows: “…you are reminded of the confidentiality agreement you signed when you were employed by Strategic and are hereby notified that Strategic will call all reasonable actions against you should you decide to violate that confidentiality agreement.”  The letter notes that it was hand delivered to the worker – an act which could be somewhat intimidating. (Read the full letter below.)

Why should workers engaging in registering voters for public elections in a democracy be subjected to confidentiality agreements and legal threats.

Elijah E. Cummings, Ranking Member of the U.S. House Committee on Oversight and Government Reform, sent a letter yesterday to Sproul, requesting documents and a transcribed interview.   (The full letter appears below.)

In the letter, Cummings writes: “Instead of the RNC having ‘zero tolerance’ for voter registration fraud, you claimed that RNC officials asked you to form your new company, Strategic Allied Consulting, in June for the specific purpose of concealing your connections to these previous allegations. In a blunt concession, you reportedly stated that you ‘created Strategic Allied Consulting at the request of the Republican National Committee because of the bad publicity stemming from past allegations.’ ”

The House Committee on Oversight and Government Reform has been investigating allegations of voter registration fraud for several years. I am writing to request documents and transcribed interviews with you and company officials relating to allegations of widespread irregularities in the voter registration efforts of Strategic Allied Consulting, a company you reportedly formed less than four months ago at the behest of the Republican National Committee (RNC) to conduct voter registration in seven swing states for the upcoming November elections.

Last week, the Republican National Committee severed all ties with your company after Florida officials identified up to ten counties with problematic voter registrations submitted by your company. For example, the Palm Beach elections supervisor said many registrations had similar signatures and apparently phony addresses, including a gas station in Miami, a medical building in Boca Raton, and an automobile dealership in Palm Beach County. In addition, the Okaloosa County elections supervisor said the suspected fraud included apparent cases of dead people registered as Republican voters.

Reports of improper activities by your company have also now spread to other states. For example, a Fox affiliate in Denver reported last week that an official employed by your company admitted on videotape that they were registering only Republican voters because, as she stated, “We’re out here in support of Romney.”

When news of these activities broke last week, the RNC issued a public statement that it was terminating its relationship with your company. RNC communications director Sean Spicer stated: “We’ve made it clear we’re not doing business with these guys anymore. We’ve come out pretty strong against this kind of stuff—and we have zero tolerance for this.” He also stated that the RNC “acted swiftly and boldly.”

In contrast, you reportedly “criticized Florida and national Republican officials” for terminating your contracts. You claimed that the RNC was aware of similar voter registration fraud allegations against you and your companies in the past, including allegations dating back to 2004 that employees of your companies registered Democratic voters in Nevada and Oregon “and then destroyed their forms.”

Instead of the RNC having “zero tolerance” for voter registration fraud, you claimed that RNC officials asked you to form your new company, Strategic Allied Consulting, in June for the specific purpose of concealing your connections to these previous allegations. In a blunt concession, you reportedly stated that you “created Strategic Allied Consulting at the request of the Republican National Committee because of the bad publicity stemming from past allegations.”

You explained this effort further by stating: “In order to be able to do the job that the state parties were hiring us to do, the [RNC] asked us to do it with a different company’s name.” As one press report explained, “Strategic Allied was set up at an address in Glen Allen, Va., and Sproul does not show up on the corporate paperwork.”

According to the RNC, Strategic Allied Consulting is the only company the RNC hired to conduct voter registration, and it has been paid millions of dollars from both the RNC and state Republican parties. In fact, state officials report that the RNC specifically requested that they work through your company. For example, the executive director of the Florida Republican Party stated: “we immediately informed the Republican National Committee that we were terminating the contract with the voter registration vendor we hired at their request.”

In light of these conflicting accounts, I am writing to request that you provide the following documents:

(1) Copies of all contracts, agreements, and memoranda of understanding between Strategic Allied Consulting and the RNC, state political parties, or any other entities;

(3) Copies of all materials used by Strategic Allied Consulting for voter registration training, including manuals, videos, and other materials; and

(4) Copies of all reports, inquiries, notices, and other information from any source alleging any irregularities with voter registration efforts conducted by Strategic Allied Consulting.

Please provide these documents by October 12, 2012. In addition, I request that you make yourself available for a transcribed interview with Committee staff the week of October 12, 2012. I also request that you identify and make available for transcribed interviews the top officials at Strategic Allied Consulting responsible for conducting the company’s voter registration efforts. Thank you for your attention to this matter. 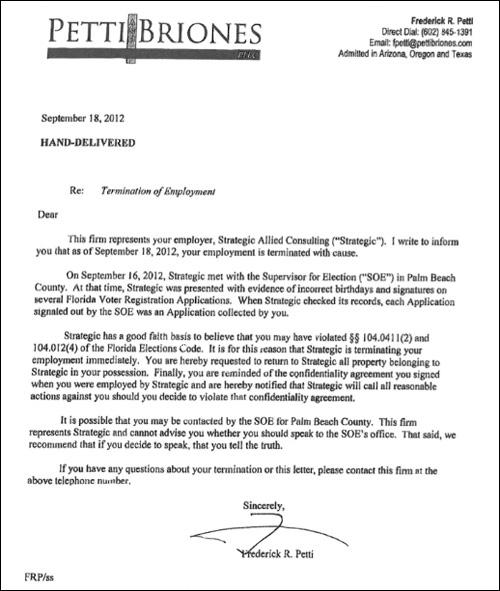