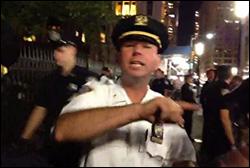 Deputy Inspector Edward Winski, notorious for enforcing a crackdown on peaceful protesters in the Occupy Wall Street movement, was back in charge this past weekend.

We are mindful that the preservation of liberty depends in part upon the maintenance of social order. But the First Amendment recognizes, wisely we think, that a certain amount of expressive disorder not only is inevitable in a society committed to individual freedom, but must itself be protected if that freedom would survive. — U.S. Supreme Court Justice William Brennan, Jr., City of Houston v. Hill (1987)

With chants of “Police everywhere; justice nowhere,” protesters marching through the streets of lower Manhattan this past weekend to commemorate the one-year anniversary of the Occupy Wall Street movement, ably summed up the situation in New York City.  At times, as captured on video footage, law enforcement looked like the unruly mob, grabbing peaceful protesters and arresting people for no apparent reason.

In 1987, in the City of Houston v. Hill, the Nation’s highest court made the law of the land very clear: if it’s a toss up between individual freedom and inconvenient disorder, our Constitution requires that disorder must not only be tolerated by the police, it must also be “protected.”

Unfortunately, the New York City Police Department makes its own laws and carries them out in consultation with private corporations in New York. Those corporations apparently admire the work of  NYPD Deputy Inspector Edward Winski.  Despite Winski facing multiple claims of violating civil rights, roughing up peaceful protestors, illegally denying access to protesters at public spaces, it was Winski that was out in the streets this past Saturday and Sunday during the Occupy Wall Street protests, barking orders and continuing to oversee arrests of peaceful protesters.

By early Sunday evening, legal monitors had reported 51 arrests, including the arrest of a legal observer for the New York Civil Liberties Union (NYCLU).  Two activists with Codepink, the anti-war and social justice organization, were arrested on the sidewalk outside Bank of America chanting “Bust Up Bank of America.” The two arrested were Rae Abileah, the organization’s co-director, and protester Amanda Lodoza of Houston, Texas. Video of the event shows no provocation to the police; just mild disorder.

As of this writing, at 7:56 a.m., police had stepped up the arrests around the Wall Street area. According to reports, another legal observer was arrested. As of early this morning, the NYPD has arrested in excess of 1900 persons involved in the Occupy demonstrations since September 17 of last year.

The conduct of the police at the November 15 eviction from Zuccotti Park was so outrageous toward the protesters, City Council Members and the media that U.S. Congressman Jerrold Nadler sent a letter on December 6, 2011 to Attorney General Eric Holder at the  U.S. Department of Justice requesting that an investigation be initiated into NYPD conduct. Nadler wrote:

“In addition to my concerns about police misconduct with respect to OWS protesters, I am especially troubled that during and after the November 15th eviction from Zuccotti Park, the NYPD aggressively blocked journalists from reporting on the incident, and in some cases, targeted journalists for mistreatment. Individuals without press credentials were also blocked from filming events, and were, in some instances, arrested apparently for taking pictures. According to news reports, and a letter from the major daily newspapers and other major news outlets and organizations representing journalists, at least ten reporters and photographers were arrested while trying to report on the incidents at Zuccotti Park. The NYPD forced journalists to leave Zuccotti Park, prevented members of the credentialed press from being present during the eviction, and used intimidation and physical force to prevent reporters and photographers from carrying out their journalistic functions. Many of those arrested were not charged with any offenses. Additionally, the City reportedly closed the airspace above the area in order to prevent news helicopters from recording the actions.”

George Freeman, Assistant General Counsel of the New York Times, wrote to the NYPD in November of last year on behalf of The Times, the New York Post, New York Daily News, and eight other media groups. Freeman described attacks on mainstream media that were reminiscent of a military junta.

On April 29, 2012, three law firms filed a civil rights lawsuit against the City of New York, Mayor Michael Bloomberg, Police Commissioner Raymond Kelly, Deputy Inspector Edward Winski, and others for “violations of rights to free speech, assembly, freedom of the press, false arrest, excessive force, false imprisonment, and malicious prosecution.” The plaintiffs included four New York City Council Members who had been arrested, one suffering head injuries, and both mainstream and citizen photo-journalists. JPMorgan Chase and other New York City corporations were also named for conspiring with the police to deny protesters the right to assembly in public spaces.

The lawsuit was filed by Leo Glickman of Stoll, Glickman and Bellina LLP; Wylie Stecklow of Stecklow Cohen & Thompson; and Yetta Kurland of the Kurland Group.

According to the lawsuit, NY1 reporter, Lindsey Christ, said that “the aggressiveness with which police handled reporters on the night of the eviction made it the scariest 20 minutes of her life.” Christ also reported that a New York Post reporter was put in a chokehold by police.

The lawsuit explains that the lies and cover-ups carried out by the NYPD stems from its insular culture which values fraternal loyalty over integrity. It documents a top down culture of perverse incentives for officers to engage in misconduct against civilians, knowing there will be no consequences.

The lawsuit argues that under the current perverted condition of the NYPD with no avenues for accountability, the City is chilling every citizen from engaging in protected speech.