As Occupy Protesters Chant F*** the Fed, Few Are Aware the Federal Reserve Has Been Given Domestic Police Powers; With Glock 22s and Patrol Cars

By mid morning today, as Occupy Wall Street protesters marched around the perimeter of the Federal Reserve Bank of New York, all signs that an FRPD (Federal Reserve Police Department) existed had disappeared.  The FRPD patrol cars and law enforcement officers had been replaced by NYPD patrol cars and officers.   That decision may have been made to keep from drawing attention to a mushrooming new domestic police force that most Americans do not know exists.

Section 364 of the Act, “Uniform Protection Authority for Federal Reserve,” reads: “Law enforcement officers designated or authorized by the Board or a reserve bank under paragraph (1) or (2) are authorized while on duty to carry firearms and make arrests without warrants for any offense against the United States committed in their presence…Such officers shall have access to law enforcement information that may be necessary for the protection of the property or personnel of the Board or a reserve bank.”

The police officers are technically known as FRLEO, short for Federal Reserve Law Enforcement Officer.  The system has its own police academies for training, their own patch and badges, uniforms, pistols, rifles, police cars and the power to arrest coast to coast without a warrant.  They have ranks of Sergeant, Lieutenant, Captain and a recruitment ad campaign with the slogan: “It’s about respect and recognition from your peers. It’s you.”

The San Francisco Fed ran an ad for Captain Specialist, noting that “you will be charged with gathering and disseminating law enforcement intelligence information to the District.” It also noted that the individual would need to “obtain and maintain top secret clearance.”  Typically, that clearance level is reserved for only the highest positions in the Federal government.

A recruitment ad for the Richmond Fed indicates their FRLEOs would be plugged into the nation’s criminal databases: “The Law Enforcement Unit has an immediate opening for a Communications Center Operator, reporting to the Center leadership team in Richmond, Virginia. The pay is $32,458 — $40,573…[the officer will query]  “information from a variety of law enforcement data bases for information, wants/warrants, intelligence, driver’s license and vehicle information, etc.” The Cleveland Fed notes that the job “may include, but would not be limited to: use of deadly or non-lethal force…”

FRLEOs now even have their own Federal Reserve Policemen’s Benevolent Association, Local 385.  The group’s Facebook page carries the statement that it is a “government organization.”  The site says the group “was established to create a fraternal organization for its membership and to act on behalf of the members as a liaison between the New Jersey State PBA and all other police agencies within the state and the country.”   The connection to New Jersey likely stems from a now deceased police officer, James Rose, from Moonachie, New Jersey, who was a FRLEO in New York and helped to establish Local 385.  In addition, the Regional office of the New York Fed is located in East Rutherford, New Jersey.

In addition to regular policing functions, the Federal Reserve police have been observed in airports with rifles, functioning as dignitary protection teams.  Various recruitment ads confirm that this is sometimes part of the job. 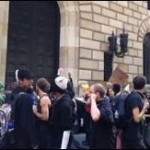 Buttressing the private nature of the Federal Reserve Banks, the Maiden Lane building that the Occupy Wall Street protesters were swarming around this morning, chanting “F*** the Fed,” was purchased on February 28, 2012 by the New York Fed, which had previously been leasing the building.  According to the press release the “Federal Reserve Bank of  New York (New York Fed) today announced that it has acquired the building at 33 Maiden Lane for $207.5 million from Merit US Real Estate Fund III, L.P. and established a new, wholly owned limited liability company called Maiden & Nassau LLC to serve as owner of the building.”

The Federal Reserve Building up for sale at 301 Rosa L. Parks Avenue in  Nashville has this slogan engraved on the building:  “Federal Reserve System Through Which Our Banks and Government Join Hands to Further the Enduring Prosperity of American Commerce, Industry and Agriculture.”

There is nothing in that motto that shows a concern for the average American. And that’s the problem inherent in the continuing venting of anger against Wall Street banks and their perceived crony patrons at the Fed who gave them trillions of dollars in low-cost bailout loans and then fought a court battle to keep the loans a secret.  That domestic policing functions have now been added to the mix can only create more suspicions and hostility.

There is also the obvious question as to why the expense, training and potential liability of armed police would be necessary when all of the Federal Reserve Banks are in cities with large municipal police forces.  With private bankers sitting on the Boards of each of these Reserve Banks, many of whom are officers of banks under criminal investigation, there is the serious need for Congressional investigation into how the Nation’s criminal databases are being used by the private sector as well as the further chilling of protest and dissent from another new sheriff in town.