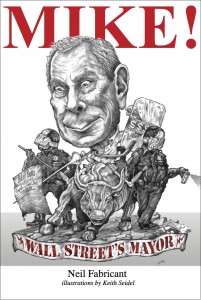 Neil Fabricant, president emeritus of the George Washington University Graduate School of Political Management and lifetime New Yorker, has penned a take-your-breath-away expose on the heretofore inscrutable Mayor of New York City, Michael Bloomberg. Mike! Wall Street’s Mayor is sharp, witty, and pulls no punches when it comes to the billionaire 1 percenter out to portray himself as the man of the people, while growing his estimated $3 billion personal wealth to $22 billion while in office.  (Exactly how does one do that?  It sure didn’t work out that way for Jon Corzine, former Senator and Governor from New Jersey.  If global businesses could run themselves, wouldn’t we all have one?)
Fabricant puts the pieces of the gambit together for you – from the Mayor’s early days at Wall Street investment bank, Salomon Brothers – made variously famous for its Big Swinging Dicks in Michael Lewis’ Liar’s Poker to its attempt to corner the U.S. Treasury two-year note auction  – to Bloomberg’s firing and pay out of at least $10 million of his share of the partnership.
After Bloomberg was fired, Fabricant relates that “Mike thought he’d join another Wall Street firm. But word had gotten around: watch out for this guy.  He’ll eat your lunch and chew on your furniture.  Nobody made him an offer.” Bloomberg founded the firm that is now a Wall Street computer data and publishing empire, Bloomberg L.P.
According to the 2012 Forbes list of billionaires, Bloomberg ranks number 20 with a cool $22 billion, made mostly from Wall Street firms and their global cronies.  The Mayor’s business empire includes the expensive Bloomberg terminal, a computer that houses enormous pricing data for stocks, bonds, research, news, charting functions and much more.  We even spotted these terminals in a photo of the New York Fed’s trading floor.  (More on that in the future.)  There are currently an estimated 290,000 of these terminals on Wall Street trading floors and offices around the globe, generating approximately $1500 in rental fees per terminal per month. That’s a cool $435 million a month or $5.2 billion a year, the cash cow of the Bloomberg businesses.
If you watch this stunning video of Occupy Wall Street protestors being savaged by the Mayor’s Praetorian Guard, submitted as brutality evidence in a court case, you might be curious as to whether the Mayor owes any fealty to Wall Street. We think we may have answered that question here and here.
In 2009, in response to Michael Bloomberg’s overturning of New York City term limits, which would have put an end to the reign of Wall Street’s Mayor, Fabricant along with journalist Nat Hentoff and former ACLU national director Ira Glasser, established a coalition of like-minded citizens, Fed Up New Yorkers, which published a free paper offering an insiders’ account of New York City politics under the Bloomberg regime.
Keith Seidel’s waggishly brilliant illustrations are sprinkled throughout the book, adding regular belly laughs to the fast moving avenues of the mayor’s political climb.  Seidel’s work has been featured in such publications as Washington Monthly, Slate.com, Mad Magazine, The Boston Globe, and Fed Up New Yorkers.
Bookmark the permalink.