Alexander Cockburn, the outspoken columnist who died on Saturday, penned his last column for The Nation on July 11, just ten days before his death.  His final column out of a lifetime of covering politics and world news predicted the collapse of Wall Street.
Alexander Cockburn had kept it a secret from all but his closest friends and family, but he knew he was dying.  He likely suspected this column would be his last. And what he chose to write about was the systemic corruption of the global banking cartel.  Perhaps we should listen carefully:
“People calling for banking reform on either side of the Atlantic are underestimating the problems of enforcement.  A writer on the financial news blog Zero Hedge recently remarked that ‘the Libor scandal seems to be waking people up to manipulation and fraud by the big banks.’  Of course, there are tools at the ready: sanctions, tribunals, a ban for life for crooked traders. But Libor was meant to be the prime glittering advertisement for the free market. Now it turns out that the whole thing is a fix – a grimy hand all too visible… Is it possible to reform the banking system? There are the usual nostrums – tighter regulations, savage penalties for misbehavior, a ban from financial markets for life. But I have to say I’m dubious. I think the system will collapse, but not through our agency.”

“The system will collapse, but not through our agency.” The last nine words memorialized in print by a man who had been writing for half a century. 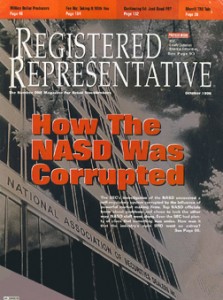 The October 1996 Cover Story of Registered Rep Magazine Dealt With a Decade of Price Fixing On the Nasdaq Stock Market, While Its Regulator, the NASD, Looked the Other Way. Traders' Taped Calls Showed a Cartel That Manipulated Market Prices to Make Profits for the House. Sixteen Years Later, the Libor Charges Reveal Nothing Has Materially Changed When It Comes To Trading Cartels and Self-Regulation.

Alexander Cockburn, in my opinion, was of the belief that Congress and the regulators are too cowed by the corrupt banking cartel to enforce meaningful reforms.  Those reforms will not happen.  What will happen instead is that the system implodes of its own hubris.

Few Americans understand the depth of the fraud, corruption and collusion; thus few Americans can appreciate how close we are to the precipice.  Alexander Cockburn did.  His brother, Andrew Cockburn, and sister-in-law, Leslie Cockburn, produced the award winning film, American Casino, documenting Wall Street’s intentional and systemic pillaging of the savings of millions of Americans.

Mark Pittman, the dedicated Bloomberg reporter (who also left this world writing about Wall Street’ hubris) instigated the lawsuit against the Federal Reserve to obtain the records of the trillions it had loaned out to prop up Wall Street banks. Pittman appeared in American Casino.  He had this to say about the era: “I don’t think most people really understood that they were in a casino.  When you’re in the Street’s casino, you’ve got to play by their rules.”  (See “How the Fed and Treasury Stonewalled Mark Pittman to His Dying Breath.”)

Unfortunately, playing by their rules is the antithesis of playing by the rules. Nothing this intrinsically corrupt can survive long term – for the simple reason that once all the customers have been fleeced, the system begins to feed upon itself.  That’s what happened in 2008 as the banks refused to lend to each other and the weakest collapsed. Because the surviving banks were allowed to concentrate the assets of the failed banks, the system today is more unstable than in 2008.  If Congress does not restore the Glass-Steagall Act and take additional measures quickly to impose a stable framework on our financial markets, it’s only a matter of when, not if, Wall Street will collapse again.