JPMorgan: If This Is a Financial Fortress, Run for the Bunkers 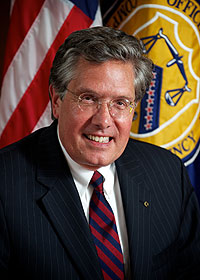 Thomas Curry, on the job since April 9, 2012 as top regulator of national banks at the OCC

The U.S. Senate Banking Committee spent over two hours on Wednesday proving to the American people that any shred of confidence they might still have in our financial markets is misplaced. Just as with the six recent hearings on the collapse of MF Global and its $1.6 billion of missing customer funds, five different regulators could not, or would not, reveal anything useful to the American people on how JPMorgan, the largest bank by assets in the U.S., was permitted to blow up billions in depositor funds in an outpost in London.

Thomas Curry, head of the Office of the Comptroller of the Currency (OCC) since April 9 of this year, did confirm one important detail during the hearing: the reckless derivative trading at JPMorgan’s London office occurred in a unit of the national bank (not the broker-dealer), using insured deposits of bank customers, while 65 of the OCC’s examiners sat in offices of JPMorgan in New York, where they are permanently stationed. 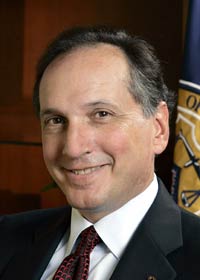 John C. Dugan, former bank lobbyist, who underwent a Senate confirmation hearing to become Comptroller of the Currency from 2005 to 2010, the chief regulator of national banks

The OCC oversees all national banks, including those deemed systemically important.  From 2005 through 2010 – when banks built up reckless derivative trades that eventually collapsed the financial system, the OCC was headed by a former bank lobbyist, John C. Dugan, a partner of the law firm Covington and Burling. JPMorgan Chase was a client of the firm.  Dugan has returned to that law firm and chairs the firm’s Financial Institutions Group.

The U.S. Attorney General, Eric Holder, who has been widely criticized for not bringing any criminal prosecutions against those responsible for the financial crisis on Wall Street, spent the prior 8 years as a partner at Covington and Burling.

Jamie Dimon, Chairman and CEO of JPMorgan Chase, sits on the Board of his primary regulator and open purse for bank screw ups, the Federal Reserve Bank of New York, which offered zero insight into how the losses occurred at today’s hearing.

Elizabeth Friedrich, a member of Occupy the SEC, offered the following insight into these dangerous conflicts of interest:

“During the Savings and Loan Crisis of the 1980s, there were 1,110 cases referred to prosecutors, resulting in more than 800 bank officials going to jail…Last month, a $3 billion trading loss took place and that is just one example of the fraudulent misconduct embedded in our financial system. Today, we cannot indict one single CEO/CFO with more money lost and corruption committed than in the 1980s. The reason: the regulators are not stepping up. This is due to the Regulatory Revolving Door from Wall Street. We are seeing these white-collar hustlers get a slap on the wrist and business continue as usual. It is the public’s job to make these people and institutions accountable.”

In anticipation that we would learn nothing useful from the keepers of the public trust, this report was prepared in the public interest over the past month.

To browse the cover of JPMorgan Chase’s 2011 annual report, one would think they are witnessing a blend of Mother Teresa and the Pyramids. Capitalized words dance around the page: STABILITY, CHARACTER, FORTRESS BALANCE SHEET.

“Fortress balance sheet” is the phrase that JPMorgan Chairman and CEO, Jamie Dimon, inserts into media interviews, conference calls with analysts and sprinkles throughout his letters to shareholders.  His folksy style and that phrase, together with some serious spending on public relations, have elevated Dimon to the new age Wizard of Oz. No one has bothered to pull back the curtain and have a real look at that so-called fortress balance sheet.  One can see why.  The actual fortress at JPMorgan is the impenetrable opacity of its balance sheet.

Dimon tells us in his letter to shareholders in his 2011 annual report that post reform “…the whole system is stronger. Accounting and disclosure are better, most off-balance sheet vehicles are gone…” But looking intensely at the firm’s financial filings with the SEC and the Federal Reserve, we learn the following about JPMorgan’s off-balance sheet assets:

JPMorgan also reports that loans to foreign banks amounted to $22 billion as of March 31, 2012.

Dimon uses his 2011 letter to shareholders as a platform to ridicule financial reform, going so far as to state “We just don’t think it is the right way to regulate banks – or operate a financial system.”  On the topic of derivatives, Dimon adds “One other great fear about derivatives is their ‘lack of transparency…’ If by ‘lack of transparency’ people mean that the regulators cannot access the information they need to evaluate the risks, then that is incorrect – they can and do see everything we can see.”  Dimon’s regulators do not believe this is a truthful statement.

On March 5, 2011, JPMorgan Chase wrote to the regulator of its bank holding company, the Federal Reserve, seeking a waiver from the rules on investment limits and capital requirements for its subsidiaries in the United Kingdom.  On May 3, 2011, JPMorgan’s wish was granted by the Federal Reserve.  One year and 7 days after the waiver was granted, JPMorgan blew up at least $2 billion of insured bank deposits in a derivatives trade in its London facility. (That loss is estimated to have at least tripled at this point.)

There was no regulator on site in JPMorgan’s  London office.  There were 114 Federal regulators on site in JPMorgan’s U.S. offices, toiling in a charade at the taxpayers’ expense, with no clue that JPMorgan Chase was over in London selling synthetic derivatives to juice its quarterly earnings reports while taking on huge risk to its depositors and shareholders.

The arrogance and contempt with which JPMorgan holds its regulators is not just evidenced by Jamie Dimon’s past haughty public statements against financial reform.  It has filtered down to middle management.  On April 30 of this year, Barry Zubrow, the former Chief Risk Officer at JPMorgan, who was elevated to lead regulatory matters and public relations this year at JPMorgan (a mismatch if ever there was one) sent an arrogant, ridiculing 29-page letter to the Federal Reserve Board of Governors, effectively telling the Board that it was clueless when it came to risk management.  (That was just 10 days before the public learned that it was actually  JPMorgan Chase that was clueless about risk management.)

One choice sentence from Zubrow went like this: “…the proposal on single counterparty credit limits fails to define what would constitute success with respect to its stated goal of reducing interconnectedness in the financial system and employs a rudimentary methodology for calculating the single counterparty credit limit that is clearly inaccurate and inconsistent with state-of-the-art risk management.”

Zubrow’s idea of state-of-the-art risk management has delivered the following to JPMorgan: a losing trade that is so large and illiquid that there is no means of exit; an estimated $2 billion to $7 billion vanishing act of depositor funds;  a criminal probe by the FBI; $33 billion shaved off JPMorgan’s common stock since the loss announcement (as of June 1); a wave of lawsuits; five regulatory investigations; the loss of public confidence in both the institution and the ability of Congress to rein in Wall Street corruption.

On May 22, the U.S. Senate Banking Committee grilled two other regulators about JPMorgan’s London betting operation.  Mary Schapiro, Chair of the Securities and Exchange Commission (SEC), said she had no idea what was going on in London because the SEC oversaw broker-dealers and the trading occurred in a bank unit of JPMorgan.  Gary Gensler, Chair of the Commodity Futures Trading Commission (CFTC), that would be expected to oversee derivatives trading, said his Commission could not lend oversight until Wall Street firms register as swap dealers and that won’t happen until the final rules on derivatives are in place.  Both regulators had to admit that their first awareness of the problem came from reading the newspaper.

The meltdown of Citigroup began in 2007.  The collapse of multiple Wall Street institutions occurred on September 15, 2008.  The Dodd-Frank Wall Street Reform and Consumer Protection Act was signed into law on July 21, 2010.  And yet here we are today with no meaningful reform in place and cowboy capitalism still running the country.

Wall Street is right now in the early innings of Phase II of the financial crisis.  Markets cannot function without trust. There is no trust; not among banks and not among the public.  Last Friday, the benchmark 10-year Treasury note hit the record low yield of 1.45 percent, an indication of a financial tsunami bubbling under the surface and sending a stampede into the perceived safety of a liquid government security.  The yield on the 10-year German bund also fell to a new record low of 1.13 percent and the 10-year U.K. gilt hit a record low of 1.43 percent.

Commodity prices continued their eight month swoon with a strong whiff of deflation in the air.  Out of 22 trading sessions in May, the stock market closed negative on 17 days.  Large bank stocks have been in a free fall for the past two months.  Were it not for Citigroup’s smoke and mirrors act of doing a 1 for 10 reverse split last year (giving their beleaguered shareholders 1 share for every 10 previously held) the stock would be trading at $2.54 instead of $25.39 as of last Friday’s close.

The Nasdaq stock market closed Friday down 46 percent from the level it set 12 years ago. That’s the so-called market for young, promising new companies and industries that will be the future job engine.  Unfortunately, the Nasdaq is marred by its ignoble history of listing bogus business models, dot.com busts and price fixing.  The U.S. job engine sputtered to an anemic 69,000 nonfarm jobs reported last Friday for the month of May.

To a growing roster of rational thinkers, the way to ensure that the Wall Street behemoths can no longer hold the U.S. economy hostage, is to restore the Glass-Steagall Act which would separate the Wall Street casinos from the banks holding insured deposits.  In other words, shrink the firms down to size to prevent the systemic risk contagion that we saw in 2008.  Unfortunately, an analysis of data at the Federal Deposit Insurance Corporation (FDIC) shows just how dangerous the Big Four Cartel has become.

It’s not just that these institutions represent systemic risk to the U.S. economy and risk to savers, their concentration of market share in the five largest Metropolitan Statistical Areas (MSAs) by population, is smothering competition and innovation and choking off business lending.

This goes well beyond just an anti-trust or anti-competition issue.  These casino banks are just not doing what banks are meant to do – safeguarding deposits and lending prudently to expand the economy.

The estimated $100 billion of depositor funds that JPMorgan was betting on synthetic derivatives in London, could have helped fuel job growth here in the U.S. had it been lent to businesses.  But that’s one of the most shocking aspects of JPMorgan’s balance sheet.

According to its filing with the Federal Reserve as of March 31, 2012, JPMorgan Chase held $454 billion in trading assets while its commercial and industrial loans to businesses in the U.S.  totaled just $91.49 billion.

Tinkering around the edges of financial reform will only deepen the duration of the economic pain.  Congress must restore trust by reenacting the Glass-Steagall Act, separating insured deposits from the casino gamblers.

Pam Martens worked on Wall Street for 21 years. She spent the last decade of her career advocating against Wall Street’s private justice system, which keeps its crimes shielded from public courtrooms. She has no security position, long or short, in any company mentioned in this article.