At approximately 10:28 p.m., after a large presence of New York City Police broke up a general assembly of Occupy Wall Street protestors in lower Manhattan, announcing by megaphone that protestors would be arrested if they didn’t disperse, the police began to indiscriminately arrest peaceful participants.

After forcing protestors out of Battery Park and onto the street, a wall of police surrounded the protestors, preventing their movement, while simultaneously telling protestors they would be arrested if they didn’t disperse.  There were multiple reports of police brutality.  At 11:00 p.m., about 200 occupiers had reassembled in Zuccotti Park, birthplace of the movement.

There were reports of violent confrontations between police and occupiers in Seattle and Oakland. 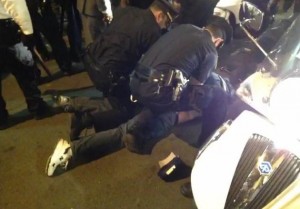 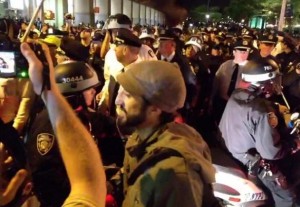