Cape Coral: A City of 204,000 in Florida Remains 86 Percent Without Power on Day Eight Since Hurricane Ian Hit 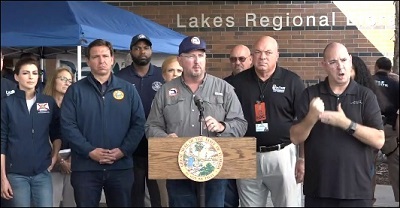 Kevin Guthrie, Director of Emergency Management for Florida, Speaks at the Podium at a Press Conference Held by Governor Ron DeSantis on Tuesday, October 4, 2022

If a major fire occurs in most cities and towns across America, there is a standing procedure to quickly call for mutual aid from other fire departments to achieve a speedy and safe resolution. But when it comes to the Lee County Electric Cooperative (LCEC) that provides electricity to the city of Cape Coral, Florida, something has gone terribly wrong in the process of calling for that mutual aid in a timely manner after one of the most devastating hurricanes in Cape Coral’s history.

Cape Coral is a city of 204,000 residents according to the U.S. Census Bureau. LCEC has been providing electric power to Cape Coral since its first six model homes were constructed in 1958 – a span of 64 years. But for days after Hurricane Ian hit the Southwest coast of Florida on Wednesday, September 28, as a Category 4 hurricane, LCEC was reporting on its Twitter page that Cape Coral had zero customers receiving electricity from LCEC. By Sunday, LCEC was reporting 5 percent with power. Yesterday, six days after the hurricane hit, LCEC was showing just 7 percent of residents with power.

We attempted to contact the press office for LCEC yesterday by calling the main phone number. There is no voice mail directory and no human answering the main phone. The press contact is Karen Ryan, but her website page at LCEC lists zero information on how to reach her by phone or email – giving the impression that she does not wish to be contacted by the media.

We reached out to the press office of Florida Governor Ron DeSantis with the following email yesterday morning, advising in part:

“According to the website at the Lee County Electric Cooperative (LCEC), as of today just 7 percent of households in Cape Coral have electric power — six days after Hurricane Ian made landfall.

“Adding to the outrage among Cape Coral residents, LCEC’s website says that it will be doubling their work crews to 2,000 by this weekend. What explains why LCEC waited this long to double their work crews from 1,000 to 2,000 and why the Governor’s office didn’t demand greater aid to the people of Cape Coral?”

The Governor’s office responded in a timely manner, noting that the Governor had indeed urged LCEC “to accept additional mutual aid to expedite power restoration to the residents of Cape Coral, North Fort Myers, Sanibel and Pine Island.”

We responded that we understood that the Governor urged LCEC to bring in more mutual aid but when it didn’t, why didn’t the Governor sign an Executive Order and force LCEC to bring the additional electric line workers in ASAP? We also reminded the Governor that “Sweltering in the daytime heat in SW Florida without electric to run air conditioners presents a dangerous threat to life and health, especially for the elderly. It deserved an Executive Order in the minds of many residents.”

Answers to why LCEC was slow to request additional line workers in Cape Coral were hinted at during yesterday’s press conference held by Governor DeSantis on the progress of recovery efforts following the hurricane. In response to a reporter’s question at the end of the press conference, DeSantis admitted that he is aware of the magnitude of the problem in Cape Coral. He stated: “I saw that you had this massive community where almost nobody had power, you know three or four days after the storm, and we needed to do better.”

DeSantis asked his Director of Emergency Management, Kevin Guthrie, to more fully address the Cape Coral issue and turned the podium over to him. Guthrie said that the Governor had indicated that he wants to see a line worker on every block and “I’m gonna put a lineman on every block. That’s gonna happen. You won’t be able to go out your front door in Cape Coral without seeing a lineman.”

The issue of who was going to pay for all of these extra line workers may have been what was holding up progress in power restoration in Cape Coral. Guthrie said this yesterday when talking about the extra line men for Cape Coral and other impacted areas: “That bill’s coming to us in the [Emergency Management] Division and we’re gonna pay it.”

It would appear that LCEC has finally gotten the message. On its Twitter page this morning it wrote:

“UPDATE: 6:45 a.m. 10/05/22 LCEC added an additional 700 line workers and tree-trimmers to the team working tirelessly to restore power throughout some of the hardest hit areas in the LCEC service territory…

“A large complement of crews will also focus on restoring the backbone infrastructure in Cape Coral in order to enable more and more restoration of neighborhoods and businesses.”

Following the Governor’s press conference yesterday, it does appear that significant progress has been made in Cape Coral – now in day eight since Hurricane Ian hit. LCEC shows on its Twitter page that out of the 94,276 customer households it serves in Cape Coral, 13,057 now have power. That means 13.8 percent have power while 86.2 percent are still without power. (The positive news is that the 13,057 is almost twice as many as the day before.)

Unlike Michael Brown, whose career background with an Arabian horse association didn’t stop him from being named the head of FEMA by President George W. Bush and presiding over the disastrous response to Hurricane Katrina in 2005, Guthrie appears to have a substantial background in emergency preparedness.

Guthrie spent 23 years as a police officer and Emergency Preparedness Coordinator with the Jacksonville Sheriff’s Office. He served as the Public Safety and Emergency Management Director for the Flagler County Board of County Commissioners and the Assistant County Administrator for Public Safety for Pasco County, where he was responsible for all Emergency Services, Fire/Rescue and the 911 Communications Center Departments. Guthrie also previously served in the administration of former Florida Republican Governor Rick Scott as Chief of Staff in the Division of Emergency Management.

Yesterday, LCEC released this advisory to its customers:

“Customers out of power at this time are urged to inspect and make repairs to their weather head and any damage to their home electric system if needed so they are able to receive power when restoration crews reach their area. LCEC reminds customers to stay away from downed power lines, turn off breakers until power is restored, and use generators safely to protect themselves and crews working on lines in their neighborhood.”

Below are Twitter postings reflecting the state-of-mind of some Cape Coral residents.

Editor’s Note: Should anyone reading this think that Cape Coral might be an opportune target for looting, we would caution that there is a heavy police presence. Also, most of the residents remain in their homes and many are gun owners. The authors have relatives in this area. Neither of the Tweets below come from people we know. 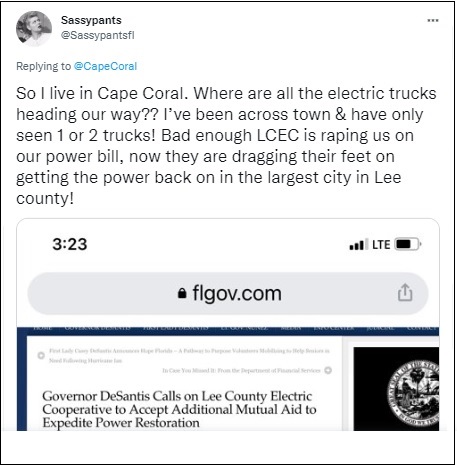 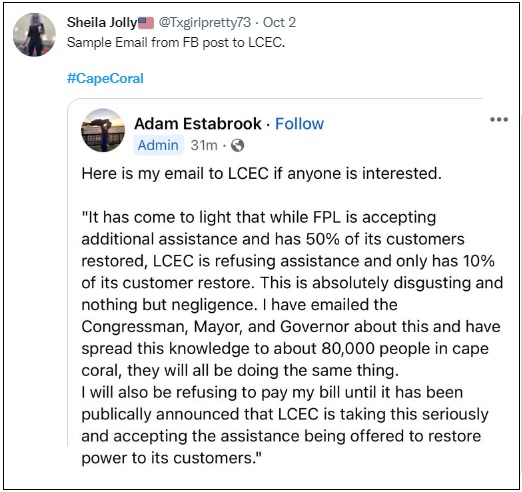