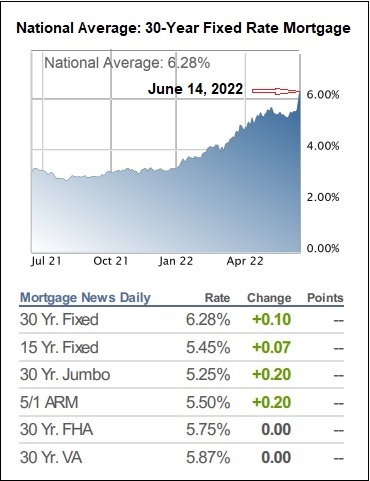 Wall Street does not have exclusivity on the pain trade. There’s pain at the pump for average Americans, pain at the grocery store, and now, adding to the pain for American home buyers who have watched the cost of homes spiral upward over the past year, the national average on the 30-year fixed rate mortgage just spiked to 6.28 percent as of yesterday.

“The average lender is quoting top tier 30yr fixed rates in the 6.25-6.375% range, but as we discussed yesterday, it’s cheaper than normal to buy one’s rate down. That means rates in the high 5’s are still being quoted, but those quotes imply higher upfront costs (aka ‘points’).”

Interest rates on the 5-year and 10-year U.S. Treasury notes are also rising at a breathtaking pace – effectively doing much of the Fed’s tightening work for it.

As the chart below indicates, the yield on the 5-year U.S. Treasury note has climbed from 1.25 percent at the beginning of the year to trade at a yield of 3.488 percent as of 8:10 a.m. (ET) this morning, after touching an intraday high of 3.59 percent earlier today. Likewise, the yield on the 10-year U.S. Treasury note, which began the year at 1.50 percent, is trading this morning at 3.38 percent – an inverted yield from the 5-year Treasury. (When longer-dated Treasuries are yielding less than shorter-dated ones, the yield curve is said to have “inverted.” Wall Street interprets this as a signal from markets that there is a growing risk of recession, since the lower yields farther out the curve suggest that a slowdown in economic activity is coming.)

Indeed, there is evidence of a slowdown and layoffs in one part of the economy: the new economy that Wall Street cooked up for America this time around with its FinTech blitz. For how this might all end, one might recall how the dot.com bust ended after Wall Street collected all of those fat underwriting fees for bringing dot.com companies to public markets as hot IPOs while their analysts were internally calling them “dogs” and “crap.”

On June 2, the Winklevoss twins (Tyler and Cameron) announced that their crypto exchange, Gemini, would be cutting 10 percent of its workforce. They wrote to their employees that “After much thought and consideration, we have made the difficult but necessary decision to part ways with approximately 10% of our workforce.” They referred to the crash in the value of anything connected to crypto as “crypto winter,” writing as follows in a statement to employees:

“The crypto revolution is well underway and its impact will continue to be profound. But its trajectory has been anything but gradual or predictable. Its path can best be described as punctuated equilibrium — periods of equilibrium or stasis that are punctuated by dramatic moments of hypergrowth, followed by sharp contractions that settle down to a new equilibrium that is higher than the one before. This is where we are now, in the contraction phase that is settling into a period of stasis — what our industry refers to as ‘crypto winter.’ This has all been further compounded by the current macroeconomic and geopolitical turmoil. We are not alone.”

Possibly scouting for a new career, the Winklevoss twins were recently seen singing off key with their band in a rock club in New Jersey. (You can’t make this stuff up.)

The largest crypto exchange, Coinbase, announced on June 14 that it would be sacking 18 percent of its workforce, amounting to approximately 1,100 workers. Coinbase went public on April 14, 2021 in a direct listing at a reference price of $250 per share. But its shares soared to over $400 on its first day of trading before closing at $328.28. The stock closed yesterday at $51.58, a decline of 79 percent from its initial reference price. Fortunately for its co-founder, Chairman and CEO, Brian Armstrong, things worked out much better. According to an SEC filing, Armstrong sold 750,000 shares on April 14, 2021 at an average share price of $389.10, or approximately $291.8 million in total.

This past Monday, BlockFi, a crypto lender, announced that it would be slashing 20 percent of its workforce. Its statement read in part:

“Together, we started BlockFi nearly five years ago with an idea for one retail product, the crypto-backed loan. Since then, we have expanded our retail product suite to multiple product verticals across Earn, Invest, Borrow, and Pay, supporting over 650,000 clients globally. We also launched our Institutional business providing financing, trade execution and private client services to leading institutions globally.”

Let the phrase “crypto-backed loan” sink in for a moment. A loan collateralized by an asset based on nothing more than the Greater Fool theory.

On May 23, TechCrunch reported that the giant FinTech payment services company, Klarna, would slash 10 percent of its workforce, or roughly 700 jobs. Klarna’s business is BNPL, buy-now-pay-later services, a type of cash advance that allows customers to pay for goods and services in installments without paying interest. The company makes its profits by charging retailers who offer Klarna’s BNPL services a fee.

We’re waiting for the day that we see a post-mortem in the New York Times describing this FinTech era. Between 2000 to 2002, Nasdaq lost 78 percent of its value thanks to the dot.com bust. As the dot.com crash unfolded, New York Times reporter Ron Chernow correctly described what was happening like this:

But a lot of the insiders who sold out very early in the dot.com era got very rich, as did the Wall Street analysts who issued the buy ratings – exactly what has happened with FinTech.