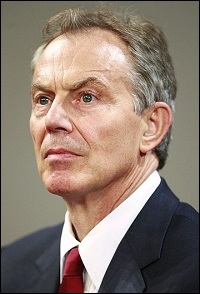 An attorney turned whistleblower who worked in compliance at JPMorgan Chase, Shaquala Williams, has named former U.K. Prime Minister Tony Blair as one of the parties receiving improperly processed “emergency payments” from the bank.

Williams is suing the bank for retaliating against her protected whistleblowing activities by terminating her employment after she raised concerns about these payments to Blair and other serious compliance issues. (The case is Shaquala Williams v JPMorgan Chase, Case Number 1:21-cv-09326, which was filed last November in the Federal District Court for the Southern District of New York.)

The new revelation naming Tony Blair was contained in a transcript of Williams’ deposition that was filed with the court last week. Prior to that, Blair had been referred to simply as “a high risk JPMorgan third-party intermediary for Jamie Dimon…” in the Williams’ complaint.

The fact that Williams had raised concerns about these “emergency” payments to Blair before she was fired was confirmed by another deposition transcript filed with the court on May 20 from a compliance colleague.

Williams is a financial crimes compliance professional with more than a decade of experience at multiple global banks. Part of Williams’ role at JPMorgan Chase was to make sure that the bank was in compliance with a non-prosecution agreement the bank had signed with the Justice Department in 2016. (The bank has admitted to five criminal felony counts since 2014 and also received non-prosecution agreements for those as well. All of these frauds occurred while Jamie Dimon was Chairman and CEO of the bank. This is an unprecedented crime spree at a major U.S. financial institution, which just happens to own the largest federally-insured bank, “Chase,” in the United States with more than 5,100 branches across the country and $2.6 trillion in deposits. For how two trial attorneys compared the bank’s crime wave to the Gambino crime family in a book, see here.)

The Justice Department had charged in 2016 that JPMorgan’s Asia subsidiary had engaged in quid pro quo agreements with Chinese officials to obtain investment-banking business and had falsified internal documents to cover up the activities. The quid pro quo agreements resulted in the bank putting the children of high Chinese government officials on its payroll in order to further its business interests in China.

In exchange for avoiding prosecution, the Justice Department required JPMorgan to create compliance controls around third-party payments. Williams alleges, among numerous other serious charges, that the so-called third-party payment controls were a sham and that when she blew the whistle to her superiors at the bank, the bank retaliated against her by firing her in October 2019.

The lawsuit uses the term “TPI” for Third-Party Intermediaries and defines it as follows:

“Third Party Intermediaries (‘TPI’): The purported purpose of JPMorgan’s TPI program was to detect, prevent, and deter JPMorgan personnel and non-client third parties such as agents, consultants, vendors, and suppliers, from engaging in corrupt behavior to obtain or secure business or government action on the Bank’s behalf.”

Williams defines TPI1 as follows in her complaint that was filed last November:

“…a former government official (‘TPI1’) was a high risk JPMorgan third-party intermediary for Jamie Dimon (‘Dimon’), JPMorgan’s Chief Executive Officer. The Bank processed the invoices for TPI1 through the ‘emergency payment method.’ The Bank’s policies made clear that the ‘emergency payment method’ should be used for urgent payments critical to the day-to-day operations of Chase such as emergency utility bills ‘to prevent the lights from going out.’ The TPI1 invoices did not satisfy this standard, thus leaving the payment method open to unchecked corrupt payments and violations of the Bank’s accounting controls, the NPA [non-prosecution agreement], SEC Order, SEC rules and regulations, and provisions of Federal law relating to fraud against shareholders. Further, the payments as reflected in the general ledger did not correspond with management’s general or specific authorization for the invoice payments, thereby creating inaccurate records that also constituted violations of the NPA, the SEC Order, SEC rules and regulations and/or provisions of Federal law relating to fraud against shareholders.”

A noteworthy part of the Justice Department’s November 17, 2016 non-prosecution agreement with JPMorgan Chase reads as follows:

“In addition, during the Term of the Agreement, should the Company or JPMC learn of credible evidence or allegations of actual or potentially corrupt payments, false books, records, and accounts, or the failure to implement adequate internal accounting controls, the Company or JPMC shall promptly report such evidence or allegations to the Offices [the ‘Offices’ are defined as the Department of Justice Criminal Division and the U.S. Attorney’s Office for the Eastern District of New York]. No later than thirty (30) days after the expiration of the Term of this Agreement, the Company, by the Chief Executive Officer of the Company, will certify to the Offices that the Company has met its disclosure obligations pursuant to this Agreement. Such certification will be deemed a material statement and representation by the Company to the executive branch of the United States for purposes of 18 U.S.C. § 1001.”

Page 157 of Williams’ deposition contains the following revelations about Tony Blair: (“Q” represents a question from the attorney for JPMorgan; “A” represents the answer from Williams.)

Q: Did you ever allege a failure of accounting controls?

Q. In what respect?

A: So in — in terms — well, we can just use the Tony Blair example as one example of this. He has — he was paid using an emergency payment method that the global suppliers’ services team, Tim Napier, escalated to me and it didn’t meet any of the criteria for that method, and the CFO signed off on all of his invoices for the wet signature, and at an institution like this it’s very odd that she’s not approving something like this through a system. And at the time the CFO was Marianne Lake and it seemed — or not seemed, this is actually what was happening, Mr. Blair — Mr. Blair’s expenses as a TPI were being paid through this method as an emergency where it should have just been a typical TPI salary payment and that payment method was wide open for anyone to use; as long as they knew where it was, they could just click through it and pay whoever they wanted for whatever they wanted…

Pages 171 and 172 of the Williams’ deposition contain the following additional insights into Blair’s role at JPMorgan:

Q. And who is David Gillis?

A: An attorney with JPMorgan and the company’s secretary.

Q: And what sort of working interactions did you have with Mr. Gillis?

A: So I assisted him with a TPI on-boarding India, I believe in October, just before I was terminated, the international counsel. So Tony Blair and others were in India with Prime Minister Modi to strike a deal on some community effort in India between JPMorgan and India, and there was a TPI that also had to help interact with the local Indian government alongside with Tony Blair and the other international unidentified TPIs that are on the international counsel to make that deal happen.

Blair served as Prime Minister of the U.K. from 1997 to 2007. He started taking down big bucks at JPMorgan not long after serving as Prime Minister. JPMorgan Chase issued a press release on January 10, 2008, announcing that Blair was being hired as a “senior advisor” and would be joining JPMorgan’s International Council. Dimon had this to say in the press release:

“We’re honored that Tony Blair has chosen to join JPMorgan Chase as a senior advisor to our executive team and Board. We operate our business all over the world, and Tony Blair will bring our leaders and clients a unique and invaluable global perspective that is especially critical in turbulent times like these. Our firm will benefit greatly from his knowledge and experience.”

The Guardian newspaper reported that JPMorgan was paying Blair “more than a million dollars” for this part time job.