Russia’s Economic Outlook Is Getting Bleaker by the Day 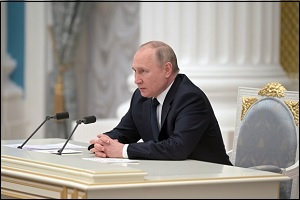 There is growing evidence that Russian President Vladimir Putin’s invasion of Ukraine and growing atrocities against Ukrainian civilians are not just delivering long-term damage to Russia’s reputation around the world but to its economy at home as sanctions begin to take a heavy toll.

Forecasts for overall economic contraction is Russia this year range from a 10 percent contraction forecast by Goldman Sachs to a 15 percent drop forecasted by the Institute for International Finance.

Signs of a slowdown are already showing up in manufacturing. The S&P Global Purchasing Managers’ Index (PMI) for Russia fell to 44.1 in March. A reading below 50 signals a contraction.

In an attempt to deal with the soaring inflation, the Russian central bank has hiked its benchmark interest rate from 9.5 percent to 20 percent. One day after the Ukraine invasion, Standard and Poor’s cut Russia’s debt rating to junk. Junk ratings soon followed from Moody’s and Fitch.

The U.K.’s Daily Mail reported on Saturday that in Russian supermarkets “Instant coffee has risen almost 70 per cent and sugar is up 30 per cent.” Multiple European news outlets are reporting that shelves are bare for feminine hygiene products.

The Yale School of Management, which has been keeping a running tally of the names of businesses suspending or ending business ties to Russia, noted today that “Over 600 companies have announced they are voluntarily curtailing operations in Russia to some degree beyond what is required by international sanctions….”

Not among that group are subsidiaries of Koch Industries, whose Chairman and CEO is the heavy-handed billionaire meddler in U.S. politics, Charles Koch. It plans to keep its Russian glass plants operating. See our detailed report here.

If you would like to send a message to Koch Industries and Charles Koch by avoiding buying the products they sell in the U.S., here’s a partial list: