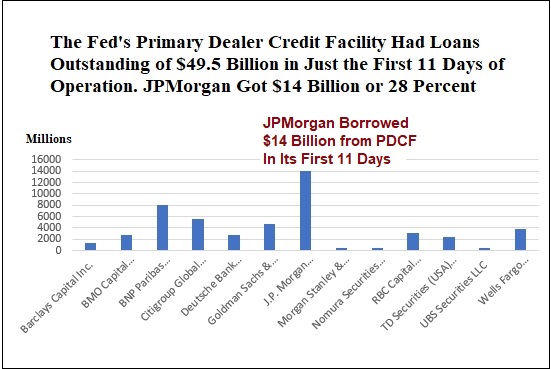 Throughout 2020, Fed Chair Jerome Powell repeatedly testified to Congress that the banks in the U.S. had proven to be a “source of strength” during the pandemic. Last Thursday the Fed released the names of the banks and dollar amounts they had needed to borrow under some of the Fed’s emergency loan operations. The data showed that units of two of the largest depository banks in the country, JPMorgan Chase and Citigroup, had required vast sums from the Fed’s emergency repo loan operations as well as its Primary Dealer Credit Facility (PDCF).

In the Fed’s first report to Congress on its Primary Dealer Credit Facility which provided a dollar amount outstanding, the Fed reported that “the total outstanding amount” as of April 14, 2020 was $34.5 billion. The PDCF was announced on March 17, 2020 and began making loans on March 20, 2020. Last Thursday the Fed released the names of the trading houses that received these loans at the miniscule loan rate of 0.25 percent. It showed that at the end of the first 11 business days of operation, on April 3, 2020, the Fed had an outstanding balance in the PDCF of $49.5 billion and the trading unit of the largest bank in the United States, JPMorgan Chase, which perpetually brags about its “fortress balance sheet,” had needed to borrow $14 billion of that $49.5 billion or 28 percent of the total.

Why hide the Primary Dealer Credit Facility information from Congress and the public? Because the trading units of JPMorgan and Citigroup were also borrowing vast sums of money from the Fed’s repo loan operations at the same time they were borrowing billions from the PDCF. This would have been a big embarrassment for Jerome Powell and his quest for a second term as Fed Chair because the Fed is supposed to be “supervising” these two banks.

Another major embarrassment for Jerome Powell is that when the emergency repo loan operations began on September 17, 2019 – months before there was any reported case of COVID-19 anywhere in the world – the Fed reported that the emergency repo loans were needed because U.S. corporations had withdrawn large amounts from the banks in order to make their quarterly federal tax payments and that had created a liquidity gap in the financial system.

But when Wall Street On Parade analyzed the transaction data that the Fed released after a two-year lag for its repo loans made in the last quarter of 2019, it showed that three of the six largest borrowers from the Fed’s emergency repo loan operations were the trading units of foreign global banks: Nomura (Japanese), Barclays (U.K.) and Deutsche Bank (German). (See our report here.) Does anyone really believe U.S. corporations were putting any serious amount of their corporate tax payments in foreign banks?

Something very similar, and as yet unexplained, occurred with the Primary Dealer Credit Facility. As the chart below shows, looking beyond the first 11 days of the Primary Dealer Credit Facility to the full life of the program from March 20, 2020 through May 12, 2021, three trading units of foreign banks received 45 percent of the total for all 16 trading houses that participated. Those three firms were BNP Paribas Securities, which received $1.02 trillion; Deutsche Bank Securities at $940.3 billion; and RBC (Royal Bank of Canada) Capital Markets at $633 billion for a total of $2.59 trillion of the total $5.78 trillion loaned over the life of the program.

These are the cumulative totals of loans made by the New York Fed to the firms under the PDCF, adjusted for the terms of the loans.

Our rationale for showing cumulative totals adjusted for the term of the loan is as follows: the Fed’s PDCF program was also used during and after the financial crash of 2008. The auditing arm of Congress, the Government Accountability Office (GAO), was tasked by Congress to perform an audit of the Fed’s emergency loan operations. The GAO provided the cumulative total of $8.9 trillion for just the PDCF.

But the Fed’s PDCF program during and after the 2008 financial crisis had made only one-day (overnight) loans from March 16, 2008 to February 1, 2010. The PDCF in 2020 and 2021 loaned multiple billions of dollars in term loans that stretched out for as long as three months. For example, on March 27, 2020 BNP Paribas Securities borrowed a whopping $5 billion from the PDCF for a term of 90 days. Similarly, on April 9, 2020 RBC Capital Markets borrowed $4 billion for a term of 90 days. In order to provide an accurate assessment of the cumulative totals, we had to adjust for the term of the loans to see who actually were the major beneficiaries of the Fed’s emergency loan programs.

JPMorgan Chase, under the Fed’s unwatchful eye, has racked up five criminal felony counts, admitting to all of them since 2014 as the Board of Directors of the bank not only kept the same Chairman and CEO, Jamie Dimon, in place but made him a billionaire in the process. Since Bank of America has not racked up a similar criminal history nor needed to borrow the vast sums of JPMorgan from the Fed’s emergency loan operations, it would appear that there is something about its management, risks controls and supervisory framework that is highly superior to that of JPMorgan. The Senate Banking and House Financial Services Committees have a duty to drill down on all of this and share its findings with the American people in a public hearing. That needs to happen soon. The public has already waited two years for the Fed to release the names of the banks and the sums they borrowed.