Fed Governor Lael Brainard Should Not Be Leaking Details of Fed FOMC Minutes, Especially Given Her Husband’s Ties

Multiple current and former Federal Reserve officials remain under investigation for the worst trading scandal in Fed history. This investigation includes the former President of the Dallas Fed, Robert Kaplan, who traded in and out of S&P 500 futures contracts in lots of “over $1 million” while sitting as a voting member of the Fed’s Open Market Committee (FOMC), which sets interest rates and makes other critical monetary policy decisions that move markets. The investigation also involves former Boston Fed President Eric Rosengren, who actively traded in a joint account with his wife, who had been given a margin account by a Fed supervised bank, Citigroup’s Citibank. (See our extensive archive on the Fed’s trading scandal.)

Last Tuesday, President Biden’s nominee for Fed Vice Chair, Lael Brainard, who has been a Fed Governor since 2014 and has had a permanent voting seat on the FOMC throughout that time, delivered a speech to a conference at the Minneapolis Fed. During the speech, Brainard raised eyebrows and tanked the stock market when she said this:

“Accordingly, the Committee [FOMC] will continue tightening monetary policy methodically through a series of interest rate increases and by starting to reduce the balance sheet at a rapid pace as soon as our May meeting. Given that the recovery has been considerably stronger and faster than in the previous cycle, I expect the balance sheet to shrink considerably more rapidly than in the previous recovery, with significantly larger caps and a much shorter period to phase in the maximum caps compared with 2017–19.”

Brainard had effectively leaked key components of the FOMC minutes to the press which were not due to be released until the following day — Wednesday, April 6. When those minutes were released on Wednesday afternoon, April 6, they confirmed what Brainard had said the day earlier about balance sheet reduction in May being a possibility. The FOMC minutes read:

“Participants also agreed that reducing the size of the Federal Reserve’s balance sheet would play an important role in firming the stance of monetary policy and that they expected it would be appropriate to begin this process at a coming meeting, possibly as soon as in May.”

Reducing the size of the Fed’s balance sheet means a further tightening of monetary policy on top of the tightening from the Fed’s interest rate increases. Following news of Brainard’s comments on Tuesday, April 5, the Dow Jones Industrial Average closed with a loss of 280.7 points while the Nasdaq tanked 328.39 points.

CNBC’s Fed reporter, Steve Liesman, had obtained a copy of Brainard’s speech ahead of her talk and released its key components on CNBC on the morning of Tuesday, April 5. The tech-heavy and interest-rate sensitive Nasdaq went into a sharp selloff on Liesman’s report of what Brainard was going to say. Anyone who had advance knowledge of the contents of Brainard’s speech could have made serious profits by shorting S&P 500 futures before the market opened and then closing their position after the stock market dived.

Why would a Fed Vice Chair nominee facing a Senate confirmation vote and who is keenly aware of the Fed’s trading scandal and the sensitivities around keeping a lid on FOMC minutes until their official release, decide willy-nilly to leak a portion of those minutes to the press a day ahead of time?

It is difficult to come up with any good answer to that question. What we do come up with are more questions, given the background of Brainard’s spouse. 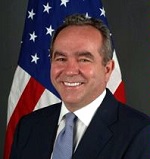 Brainard’s husband is Kurt M. Campbell, who was appointed by President Biden on his first day in office on January 20, 2021 to be his “Asia Tsar,” with the official title of National Security Council Coordinator for the Indo-Pacific. While Campbell did have prior government experience, having served in the Obama administration as Assistant Secretary of State for East Asian and Pacific Affairs, he also came to the Biden administration with eight years of baggage.

Campbell’s most recent work experience had been as Chairman and CEO of The Asia Group, a company he founded in February 2013. Campbell’s financial disclosure form filed with the Office of Government Ethics shows that it has been “revised” 14 times in the span of a year. Revisions include adding additional work positions outside of the U.S. government as well as adding additional sources of compensation that exceed $5,000 a year. (That vague criteria for compensation leaves the public wondering if the compensation was $5,001 or $5 million or $50 million, for that matter.)

A position in National Security for the United States typically would conjure up people who are precise, meticulous in detail and lacking in conflicts of interest. Needing to make 14 revisions to one’s initial financial disclosure form over the course of a year is not a good look. Neither is the fact that the key man who will be advising on U.S. relations with China reports on his financial disclosure form that he had received compensation of more than $5,000 from three weapons manufacturers: Lockheed Martin, Northrop Grumman and Raytheon.

On April 6 we emailed the media relations folks at The Asia Group (TAG) and posed the following questions:

“Can you tell me if Kurt Campbell continues to have any financial ties to The Asia Group or any of its affiliates. (Financial ties would include: an equity ownership; deferred compensation; 401(k); unvested stock options; etc., etc.)

“Also, could you tell me if TAG has a hedge fund.

“And, finally, exactly what does TAG Capital do?

Our query regarding a “hedge fund” was based on the fact that records show a company called “TAG Capital” is listed at the same address and Suite number in Washington D.C. as The Asia Group.

At The Asia Group’s website, it lists among its services the following:

“High-level information from an expansive network of sources…

“TAG Analytics generates high-impact analysis of developments across the Asia-Pacific that shape market and trading strategies and business outcomes.”

The instructions for Campbell’s financial disclosure form tell him to report under Part 7, “Transactions,” the following information: “…purchases, sales, or exchanges of real property or securities in excess of $1,000 made on behalf of the filer, the filer’s spouse or dependent child during the reporting period.”

Instead of listing securities transactions, Campbell simply writes that they are “Not required for this type of report.”

With each passing day, the lack of outrage from millions of engaged Americans via phone calls to their members of Congress is accelerating America’s race to the bottom and the installation of a kleptocracy in Washington.